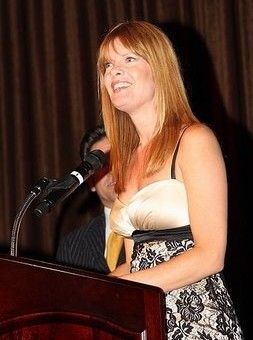 Soaps.com talks to birthday girl Michelle Stafford about bringing in a new year with honors, Disneyland fun & new story on “The Young and the Restless”!

It’s already been quite a September for Michelle Stafford: With a new story brewing at Y&R and a new humanitarian award to her name, she celebrated her September 14th birthday at Disneyland with 25 of her closest friends!

“We’re going to Disneyland all weekend,” she tells Soaps.com when we catch her on the road, Friday. “I’m spending the night at that hotel in the middle of California Adventure and I have a guide, so we won’t have to wait in lines.”

Disneyland without the lines sounds like a dream come true, but Michelle was just as psyched about strolling the self-proclaimed “Happiest Place on Earth” as she was about hopping onto Mr. Toad’s Wild Ride or Indiana Jones™ Adventure.

“All the rides are fun, but Disneyland is not so much a ‘ride park’ as it’s a magical, sweet, fun time,” she explains. “There are so many kids there and they’re just so adorable. They love it so much. That’s exciting, too.”

Not a surprising take, considering much of the humanitarian work for which Michelle was recently honored affects children. In fact, one of our recent stories on Michelle was about her involvement in an amazing program called “Project Cuddle”, but the activist was singled out by The Friends of the Southern Asian American Communities (Fosaac) for the breadth of her work.

“FOSAAC is trying to get relationship between The States and the American Asian communities together, because there’s lots of discrimination and just ‘opinion,'” Michelle outlines. “When I met Kevin Kaul, who is the head of FOSAAC and an amazing man, he was interested in the community service I do and wanted to award me.”

Thus she was honored at FOSAAC’s 5th Annual Awards Banquet at the Beverly Hilton on Saturday, September 6th.

“It was great fun!” Michelle reports. “I had a table to myself, so I had some friends there. There was music and entertainment. It was a blast.”

All right, we know: A few of you readers are probably antsy to hear about this new storyline teased at the beginning. What we can tell you is that the action around "Restless Style" magazine may be winding down.

"That magazine was cool, but now we're going in a different direction, which I'm really digging," Michelle previews. "Right now, Jack and Sharon are out and Nick and Phyllis are running things alone. There are interesting things going on between the four of them and I always love working with Josh (Morrow, Nick) - he's amazing and so much fun – and Sharon (Case, Sharon) and Peter (Bergman, Peter)."

As for what this new story is? "I don't think I can talk about it!" she apologizes, but she has high hopes. "Daytime TV has the ability to take viewers for a ride and I want to do that for the guys watching Y&R. I want people to be excited to tune in. I want them to dig it!"

If it involves Phyllis starting trouble again, we're sure they will!

Young and the Restless Weekly Blog!