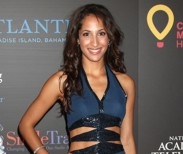 Christel Khalil (Lily Winters Ashby, “The Young and the Restless”) has signed on to appear on Primetime’s “NCIS: Los Angeles.” Christel will appear in the episode entitled, “Patriot Acts,” which is slated to air on Tuesday April 10 at 9:00 PM on CBS.

Check your local listings so as not to miss! Read about Eddie Cibrian on Rizzoli & Isles. Check out Soap Opera Fan’s Soaps Digest column.

Thank You Video By The Young And The...