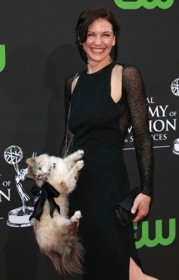 Stacy’s episode of “Hawaii Five-O” will air on Monday April 9 on CBS. She’ll play Nancy O’Hara. The episode will center on a serial killer and stunning information coming to light from Max’s childhood.

Actress Stacy Haiduk, who plays both Patty Williams and Dr. Emily Peterson on “The Young and the Restless,” has been cast in a guest role on Primetime’s “Hawaii Five-0.” Stacy announced to fans and friends on Facebook, “Okay, So I just booked an episode of “Hawaii 5 O.” I get to go to Hawaii. Yea! I have never been there before. Looking forward to it. I hope everyone is well.”

Stay tuned to Soaps.com for further information on the episode as it becomes available.

Read about Lauralee Bell on Castle. Join us on Twitter @soapoperafan and Facebook. Come tweet and Facebook with us about “The Young and the Restless,” all the other soap operas, “Glee” “Grey’s Anatomy,” “Vampire Diaries,” and “Venice the Series!”

The Young And The Restless Alum...

The Young And The Restless Return...