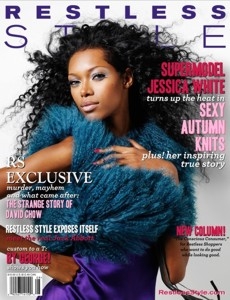 Heads up, Soaps.com readers! The fourth installment of Restless Style magazine will feature Jessica White as she graces the cover of this issue! She will be appearing today as herself on Y&R.

Watch for Jessica White to diss Chloe, who once worked with Jessica – but Jessica doesn’t even remember her and can’t even get her name right! Jessica will also be in the middle of yet another controversy between Sharon and Phyllis as they snipe over which outfit she should wear!

White, of course, is the latest Maybelline spokesmodel on contract. In 2007, Tyra Banks dubbed White as “the model of her generation”.

Soaps.com is giving you a sneak peek at the new cover, but for additional photos, and behind-the-scenes footage, make sure to check out RestlessStyle.com next week! Also available on the site is a new column catering to ‘Conscious Consumers’, for those restless shoppers who want to do good, while looking good!

Jennifer Rhodes Set to Appear on...