Ken Howard Joins The Young And The Restless 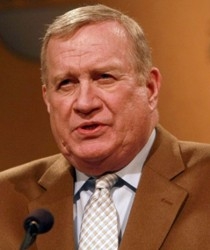 According to a report by TV Guide, Emmy and Tony Award Winning actor Ken Howard (ex-Ken Reeves, “The White Shadow,” “1776,” “Dynasty,” “Rambo,” “Grey Gardens”) has been cast as George, father of Phyllis (Michelle Stafford) and Avery (Jessica Collins). Ken begins taping this week, on January 19, and will first be seen on air on February 23. He is slated for four episodes initially.

Are you excited to see the character of George on “Y&R?” Let Soaps.com know by voting below.

Read about Signy Coleman’s return to Y&R. Join us on Twitter @soapoperafan and Facebook. Come tweet and Facebook with us about "The Young and the Restless," all the other soap operas, "Dirty Soap," "Glee" "Grey's Anatomy," "Vampire Diaries," and "Venice the Series!"