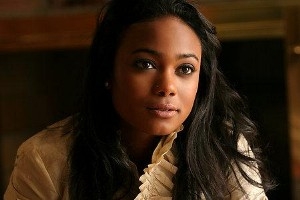 Beautiful, and busy, young actress Tatyana Ali will once again grace the screens of lucky The Young and the Restless viewers as she drops in again this week on August 6th in her recurring role as Devon’s (Bryton McClure’s) girlfriend, Roxanne.

Of course, Devon’s time, of late, has been a three-way split between singing with his cousin Ana, working his father to let him drop out of business school and pursue music full-time, and rolling his eyes and making snarky remarks to Chloe (Elizabeth Hendrickson), who is currently trying to ruin his sister Lily’s (Christel Khalil’s) life! It’s amazing he can find time for Roxanne!

Tatyana has been keeping busy outside of Y&R with many projects. In addition to working on the Barack Obama campaign, she is now appearing in the film “Hotel California” in a good-size role, alongside hottie, Tyson Beckford! She also has two other film projects in the bag. The first is “Privileged”, a drama in which she plays the character Talia, as well as the thriller “Locker 13”, which is done in the style of a series of vignettes (all connected by the mysterious locker 13). In this project, Tatyana stars as Amber, alongside well-known actors Rick Schroeder, Jon Polito, and Jesse Garcia, among others!

Wondering where you’ve seen Tatyana before? She practically grew up on Sesame Street, and then played one of the main parts on popular sitcom, “The Fresh Prince of Bel Air” – Ashley Banks! Tatyana has worked steadily in television and film since then, as well as having pursued her music, releasing her album, “it’s all right/somebody loves you” in 2007. For a listen, visit her website!

Maybe Roxanne will get in on the recent trend toward singing on Y&R and take the stage at Indigo! Keep your fingers crossed, ’cause she’s good! Regardless, Soaps.com is glad to see her popping up again on the The Young and the Restless!