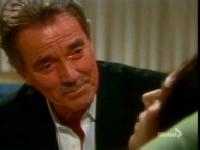 Well, Soaps.com readers, the writers have done an excellent job of tying up loose ends this week! As so many of us have been wishing to, we’ve finally found out how Victor got Sabrina pregnant, the truth about David Chow, as well as the rest of the story about the Ji Min murder! Here is my take on the events of this past week. Please feel free to leave a comment whether you agree or disagree. Remember, it’s all in fun!

David Chow: They seem to have finished telling his story, but I feel strangely unsatisfied. Was he really an evil human being, or was he just a troubled man whose gambling got him in way over his head? The writers appeared to go out of their way at times to show David’s true love for Nikki – was this a lie? Did he drug Nikki with evil intent or in an act of desperation? Some will say it no longer matters, and they may be right, but one little part of me wants Nikki to not have been completely wrong in believing that he loved her.

Jill/Ji Min: Will getting the answers about Ji Min’s killer soften Jill’s recent rash of witchiness? Somehow I doubt it. I’ve found myself rooting for Brad, even Jeff and Gloria, to take that company from her – just to repay her for her meanness! Now that she is able to move on from Ji Min, perhaps a visit from say, Larry Warton, would be in order. Now that might put a smile on her face…

Heather/Adam: A lot going on for these two this week! Heather smooches some boss-butt at Jabot by presenting the truth about Ji Min’s murder to Jill, only to take her kissy-lips back to her former boss, the D.A., and mooch her old job back! Interesting. Now I’m waiting to see if her having found Ji Min’s real killer will make Ol’ Vic go any easier on her! Did you notice how breezily she took credit for all of Paul’s hard work too, after being so witchy to him all these months?! Heather’s lover, meanwhile, seems to be going on an ego trip! From telling the help at the Ranch that they’ll answer to him, to trying to run things at Newman (conveniently forgetting about Neil), to announcing to Heather over coffee that he will inherit Newman Enterprises, our boy Adam is really getting ready to step into his father’s shoes! In fact, he has now decided to call himself Victor Newman as well! Frankly, he’s got me cringing on his behalf – talk about setting himself up for a big spanking from the Mustache!

Restless Style Gang: Thoroughly enjoying the fireworks over there this week as they all take turns hurling shots at one another while trying to figure out who is the most reprehensible. I have to say, while I see Jack’s point with the Sabrina article, I think Phyllis’s disappointment bothered him on Friday’s episode. No, she certainly has no room to point fingers at anyone, but that’s what makes the conflict so compelling. (i.e. If Phyllis thinks it’s bad – it must be truly sleazy!) In any case, I think they all have things to feel guilty about – very human. Great writing! Oh yeah, and if I was Adrian (and I am a writer), I’d be so ticked off!! Especially now that Sabrina is gone and he can’t go to explain himself to her.

Amber/Daniel: Time to get past the waffling (on Daniel’s part) and the boo-hooing (on Amber’s part) and move forward. This couple has rooting value, but not if this stuff drags on. Give them an adventure or some intrigue to deal with as a couple – they’re fun together!

Jana/Kevin: Wedding bells are in the air! Bring it on! This couple has grown on me to the point where I can’t imagine them with anyone else!

Michael: By the end of this week he is determined to find Lowell (his father). Knowing that Michael Gross has been cast in the role, I cannot wait to meet him - I'm as eager as Michael Baldwin himself! Here's hoping Michael Gross brings as much to the show as Ted Shackleford has as Jeffrey Bardwell.

Chloe: Still too much of a one-dimensional villainess for my taste. Her antics this week have done nothing to change that opinion. Doctoring an ultrasound photo and talking to herself...sigh. I keep trying to get a better understanding of her character (and her motivations), but it just isn't happening - yet.

Last but not least, Victor/Sabrina: Well, she's gone, and Victor will be grieving in the form of rage. I suspect we may see Victor do a disappearing act too - only because this is so often his reaction to tragedy. This past week, Eric Braeden's acting was bang-on as he dealt stoically with the predicament Sabrina found herself in, while still showing his 'just beneath the surface' vulnerabilities. You could almost feel his panic at times, and who didn't shed a tear when she finally left him? It was pretty scary the way he glowered at Nikki at the end of Friday's show - lots of conflict stirring - yay! Also, Victoria's last minute turn-around was very realistic - bravo writers!

Most of the week revolved around the events of "Sudden Impact", which, with all of the promotion and publicity beforehand, unfortunately, wound up not being very sudden and not having much impact at all, from a viewer's perspective. Much more shocking and unexpected was the revelation between David and Walter two weeks ago that David was Ji Min's killer. This out-of-the-blue stunner made jaws drop, and caused a flurry of instant messages between the Editor-in-Chief and me! Now that's impact that leaves a mark! Well done!

Danny Trejo to Guest on Young and...

Kate Hudson Cradles Daughter Rani, 2, As They Adorably Dance Together In The Ocean — Watch