Danny Trejo to Guest on Young and the Restless! 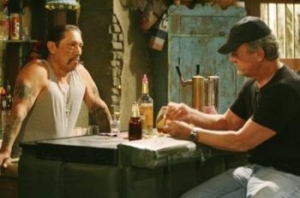 In an interesting move, Y&R has hired well-known character actor, Danny Trejo, to play a bartender on the soap beginning August 11th.

Danny’s character will interact with Victor Newman in Mexico. After the tragedy of the car wreck, Victor hits the road in a quest for answers, and meets up with the rough and tumble bartender along the way.

Actor Danny Trejo grew up in Los Angeles and his personal story is fairly well known. He was a criminal and drug-addict who wound up in San Quentin prison and turned his life around by taking up a sport (boxing) and entering a 12-step program. Soon, he had a chance meeting with someone in the entertainment business, ended up coaching actor Eric Roberts on how to box, and the rest is history. Danny has done five or more movies per year since 1985!

Soaps.com is very pleased that Danny has been able to fit Y&R into his busy schedule. We are very excited to see the scenes with his character and Victor!