Karmina Featured on The Young and the Restless! 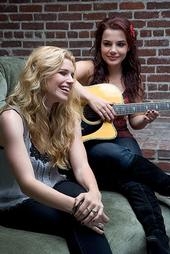 Soaps.com readers! That fantastic music you have heard in the background of some of your favorite Y&R scenes recently was performed by hot duo, Karmina!

Karmina is comprised of two sisters, Kelly and Kamille Rudisill. Kelly was born in Germany, and Kamille in Hawaii. They were raised in San Francisco where they were both enrolled in the San Francisco Conservatory of Music by the time they were 10 years old. Both girls hold B.A.’s in Music Industry from the Thornton School of Music at USC.

Their name, “Karmina”, means “song” in Latin, and is the perfect understated label for the pop pair. Only 21 and 23 years of age, they are already signed to CBS Records, and have just put out their debut album, “Backwards Into Beauty”. Their music is characterized as soulful and emotional, while at the same time melodic and full of fun pop beats.

The two songs used for The Young and the Restless were entitled, “Be With You” and “Satellites”. Fans of the Y&R are encouraged to visit Karmina’s MySpace Page, where there is a special offer exclusively for viewers of the show! Also on the site, you can see photos, video footage of their debut video, “The Kiss”, and find out information about where they are touring!

Soaps.com is excited that Y&R is attracting such substantial talent to the #1 daytime drama! If you miss one episode, you may miss out on hearing your next favorite song, or discovering a new artist! Just an added bonus to tuning in!