Changes.
You have to feel for the employees at Restless Style – how many times has this rag changed hands? In any case, Nick firing Phyllis was a logical next step – they have never been able to agree on magazine issues. Both sides had a decent argument – you can’t ignore a huge murder investigation, yet you can’t trash someone’s family members in print to sell issues either. Having Billy back at the helm promises to be entertaining, but you have to wonder when the Myanmar/Chelsea stuff will come back to bite him…

My sister, my stalker.
Avery may look pretty and vulnerable, but her behavior where Phyllis is concerned is sometimes creepy. The way she admitted her father was guilty and then totally denied it the next day was a little freaky – especially when added to the fact that she’s representing Daisy with no thought to the consequences for Lucy, and is sleeping with Nick to boot. Heck, she even admitted to following Phyllis’s life online before she came to town to represent Sharon. Nick thinks he can ‘handle’ her – guess we’ll see!

If I wasn’t so relieved to see you...
The ‘feel good’ scenes where Chloe and Billy talked, and she marveled while Kevin and Billy needled each other good-naturedly were a treat. It’s also funny how Victoria and Chloe have bonded with that slight undercurrent of weirdness about it. Now if we could just derail this Chloe/Kevin wedding we’d be all set. Honestly, they’re like brother and sister, or best buddies – they definitely share a vibe, but it’s not romantic/passionate. Now that Delia’s better, perhaps Chloe can become less ‘frumpette’ and more ‘fashionista’ again – I miss that side of her personality. Who wouldn’t love to see Chloe give Phyllis a run for her money in the Ronan sweepstakes right now? Would you pair Ronan with Chloe or Phyllis?

Music angel.
It’s intriguing that Abby and Devon are going into business together and that he was able to give Katherine back her money – must have been satisfying for him. Daniel and Eden as his cheering squad this week was quirky. As for Tucker and Katherine, it was exciting there for a minute when they nearly made up – until he saw Harmony. It defies explanation that Katherine is saddling herself with Devon’s mother. Katherine’s having a hard enough time selling herself to Tucker and Devon, and having Harmony as a sidekick is just making it worse! That said, Harmony telling her story at the AA meeting made it clear what a powerful character she has the potential to be.

Best new cast member.
Or should we say ‘cat’ member? The ‘Dave the cat’ stuff is too funny!

Join us on Twitter @soapoperafan and Facebook. Come tweet and Facebook with us about "The Young and the Restless," all the other soap operas, "Dirty Soap," "Glee" "Grey's Anatomy," "Vampire Diaries," and "Venice the Series!"

“Y&R” had a lot going on this week – many entertaining scenes and plenty to remark on. Here goes:

Island honeymoon.
Ashley and Tucker were extremely hot on their island honeymoon! They both looked fantastic all wet and making out is their swimsuits – great chemistry they share. The downside was that this romantic interlude was short-lived. The twist of Emily being Tucker’s therapist was a winner – though I was puzzled about Ashley’s strong reaction – she and Emily were basically friendly. In any case, the Jack/Emily reunion was touching.

Top cat.
Loved the gloaty scenes with Adam ensconced in Victor’s chair at Newman Enterprises taking on all comers!

Nikki’s return.
She’s finally back! It’s like finding the missing piece to a puzzle, isn’t it? Nikki’s scenes of drunken confession with Victor were powerful (of course I don’t really believe she did it – she just thinks she did), as was her exchange with Victoria, but the reunion with Nick was basically a snore. Nikki also shared amazing scenes this week with Harmony, Deacon, and, not to be forgotten, the vodka!

Victor’s confession.
This is classic soap and the actual confession was pure gold – “I injected the bitch…and then bashed her head in!” Victor pretending to be drunk, Adam showing up just in time to back-up ‘Dad’s’ story, and Nikki crawling out from under the haystack after everyone left – just excellent. The downside…

Murder mystery marathon.
Many viewers wish the Diane murder mystery would just end, no matter what entertaining scenes (see above) it may produce as it goes along. Since many decided Patty was the killer months ago, the ‘real time’ investigation just feels too drawn out. Another issue may be that we just didn’t care enough about Diane to be so invested in finding her killer. 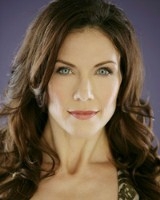 The Mentalist Casts The Young And The Restless' Stacy Haiduk

The Young And The Restless Saturday Teaser Poll: Change