Breaking News! Raya Meddine Leaving The Young and the Restless! 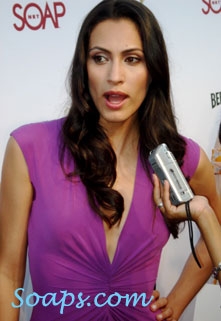 Raya Meddine, the beautiful actress who plays Victor Newman’s (Eric Braeden) new wife, Sabrina, has been let go from the show after only about five months. The actress joined the show in February 2008 as the best friend of Victor’s daughter, Victoria (Amelia Heinle), who had come to town to visit on her way to set up a new life in New York City.

No final airdate has been announced for the character of Sabrina, but as Soaps.com has reported earlier, previews show her involved in a tragedy that will unfold at the time of the Charity Ball.

Raya had signed a three-year contract, but there is a pervasive feeling in the soap community that her character, Sabrina, never quite caught on with viewers of Y&R, particularly when writers paired her so quickly with much-older mega-millionaire, Victor Newman. Since Sabrina also recently announced that she is expecting, viewers have been waiting to see if the scribes will address the fact that Victor is well-known to have had a vasectomy, and therefore, is the baby she is carrying actually his?

According to media reports, writers for the show are aware that fans are antsy about this complication, and are working on addressing it.

Soaps.com would like to wish Raya all the best in her future endeavors. Here’s hoping she’ll turn up in the soap world again soon, as she is certainly a wonderful actress!

Karmina Featured on The Young and...