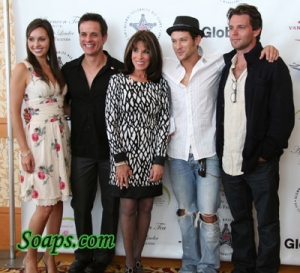 This is the 10th year that Kate Linder (Esther, Y&R) has been involved in this charity event to help end breast cancer. Why does she keep coming back? Kate says, “Vancouver is a huge market for the Y&R. It’s extremely popular here.” She says it’s also strategically located so that Canadians and Americans can get to it easily.

Kate Linder is one celebrity who truly knows how to best utilize her star power. First, the 26-year Young and the Restless veteran actor used it for profiling the disease ALS by becoming the ALS celebrity spokesperson. Then she picked breast cancer and came up to Vancouver, BC, Canada to raise funds for the Canadian Breast Cancer Foundation. In both cases, she had intimate reasons for choosing those particular causes. Her brother-in-law was diagnosed with ALS and her mother-in-law with breast cancer. Linder, or rather “Esther” the maid in fans’ circles, is adamantly positive about her latest cause. “Early detection is the key,” Linder said at her Kate Linder & Friends Y&R Tea held July 12, 2008. “She (her mother-in-law) is okay because of that fact.” With her fellow cast mates Christian LeBlanc (Michael Baldwin), Emily O’Brien, (Jana Hawkes), Chris Engen (Adam Wilson and Victor Newman Jr.) and Michael Graziadei (Daniel Romalotti), Linder threw a 10th annual tea fund-raiser for dozens of devoted Canadian and American fans who got up close and personal with the stars they can watch five days a week.

After throwing out questions at the group, fans learned Linder’s star on Hollywood Boulevard was placed April 10 of this year because that day marked the anniversary of her 26 years of portraying Esther on the show. They heard Jana (Emily O’Brien) got used to speaking without her native English accent because when she came to the US at the age of 10, “I got teased about my accent,” so she quickly learned how to lose it. The Persian beauty adds though, she also learned how to bring it back for her character, but with a softened dialect, so she could be easily understood. When she first auditioned for The Young and the Restless, O’Brien admits she had not even seen the show before. But now that she’s on it, she of course watches along with her sister Natalie who views every day alongside their mom. A fashion assistant, Natalie gets to try out outfits and ideas with her sister on set. “She’s my little toy,” she says.

One of the show’s newest actors, Chris Engen, (Adam) told his fans he was single, a guitarist, piano player and singer, from Apple Valley, CA originally, and finds working with Eric Braeden (Victor Newman) “A challenge but it is really rewarding.”

I spoke with a fan of The Young and the Restless for 34 years and daily Soaps.com surfer Sue Ferguson, from Sedro Woolley, WA, attended the tea for the first time this year. She said she watched the show faithfully largely “Because they keep it pretty real. They don’t go off on tangents.” Ferguson, who is getting married in four weeks, added she enjoyed when the show explores current controversial themes like addiction, breast cancer and drinking and driving.

Upcoming story lines were not to be revealed as 36-year-old show producer Josh O’Connell was present for the event to ensure the soap stars gave nothing away, but inside interviews with Soaps.com, O’Connell, who has been with the show for 13 years, hinted episodes scheduled for the summer months of 2008 were going to be some of the hottest ones yet with “A few revelations in the works.” He says and encourages fans. “Stay tuned!”

O’Brien confirmed her character, Jana, will be getting married but of course, like any good daytime drama episode, it will come “With a twist.” LeBlanc assured that Michael planned to stay with his current spouse. “I am going to stay married to Lauren. I am going to cling to her with white knuckles because she makes me look good.”

Twenty-nine-year-old talented and handsome Michael Graziadei, told Soaps.com his movie "The Reef", from MGM and Reef Productions Inc., should be released on DVD in September of this year. For two years prior to production, he had been working on learning how to surf. “It’s the hardest thing I’ve ever done,” admits Graziadei. He also adds however, “But that first break you go through takes all the problems away.”

A few off the cuff quotes from the actors in attendance:

Stephanie – Why did you decide to participate in this charity event?

Emily – Feels good when helping out a charity, an important charity and then, “What else am I going to do with my weekend?”

Michael – “I was just in awe the whole time.” (He mentioned some of the other characters and thought it was “A really fun cast.”)

Stephanie – What can we expect to see between Daniel and Amber in the upcoming weeks?

Stephanie – What makes the show so successful?

Josh– “We have such an amazing cast and our story telling vision. It’s what makes it.” He went on to say the show is on in 25 markets that include but are not limited to: US, Canada, France, UK, India, Australia and Romania.

· 2020 – This is the projected date set for wiping breast cancer out as a fatal disease.

· Recent campaign resulted in an increase of 46 per cent more British Columbian women are having mammograms!

Soaps.com's wish is that we can wipe out breast cancer by the projected date you see above, and that every woman who reads this article will do a breast self-examination today. Please view this short video that will educate you and could help save your life. If you're not sure how to do a self examination, please view this Short video to aid you. Women… and men.

For more photos of the coverage of this event, please visit Soaps.com on Facebook.

Y&R Stars Appear in The Essence of...