Ante Up! Judge David Young on The Young and the Restless! 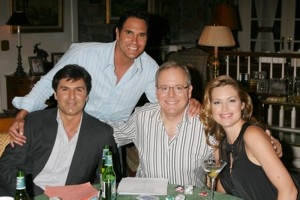 Here’s a heads up from Soaps.com for fans of courtroom drama. Judge David Young will have his acting debut on our very own The Young and the Restless. Set to air on Friday, July 11th, he will play a chiropractor who sits down at the poker table with Brad (Don Diamont), Skye (Laura Stone), and David (Vincent Irizarry).

Judge David Young has a new half-hour courtroom-based television show called, “Judge David Young”. He became well known after a high-profile case in May 2005 in which he sentenced two America West airline pilots to jail for their attempt to fly a plane while intoxicated.

Judge David delivers his no-nonsense brand of justice with a dose of sharp humor and sometimes even accompanied by a song! His underlying motivation is a real concern for the people he deals with – he works on an individual basis with probationary teens with addiction issues, and has been honored by Mothers Against Drunk Driving three times!
Find out more about Judge David Young or his program on his Official Website, and don’t forget to pop over to Soaps.com’s Main Page for a look at a video of the Judge on Y&R!

Y&R Stars Appear in The Essence of...