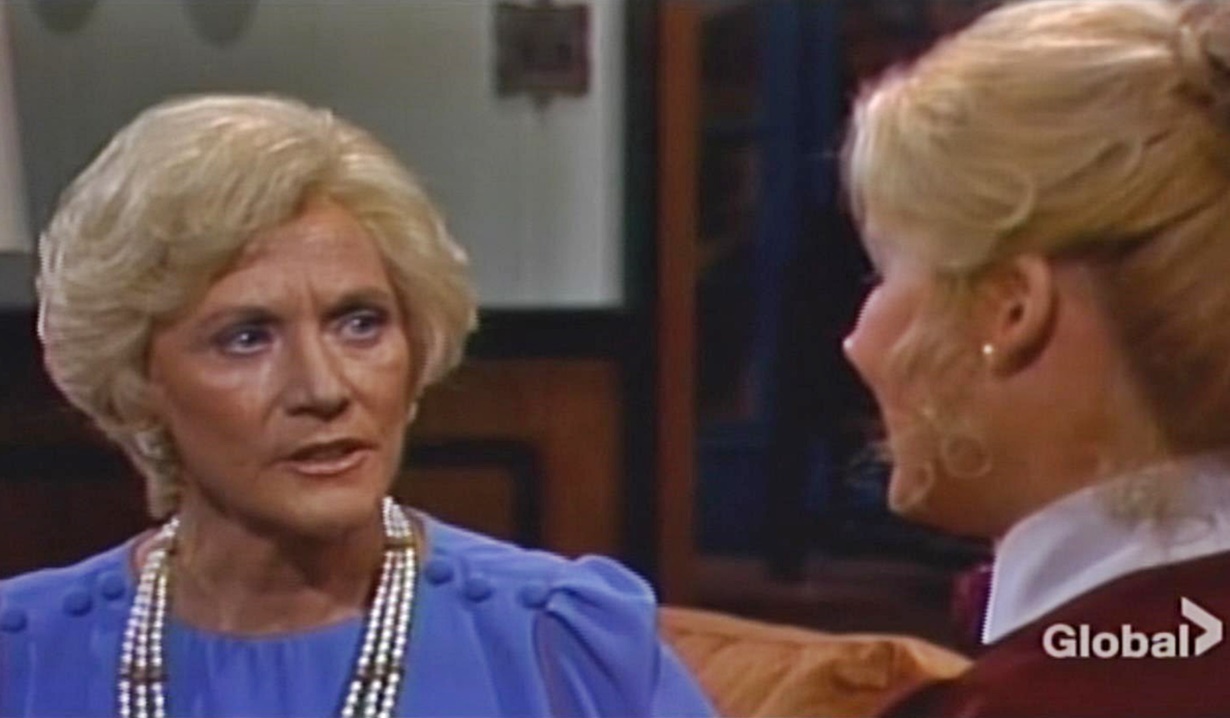 What better time, than after Jeanne Cooper’s much-deserved Daytime Emmy win for Outstanding Lead Actress, to take a look back at the history of her beloved Young and the Restless character, Katherine Chancellor? Soaps.com readers, join us as we look back at the highlights, and remember some forgotten stories, from the life of The Duchess!

Katherine Chancellor, of course, is the only remaining original character on Young and the Restless (she actually was brought on a few months after the show debuted). In the early days, she was married to Phillip Chancellor II (Donnelly Rhodes), but their marriage had begun to erode due to countless arguments over Katherine’s excessive drinking and smoking. The young woman, Jill Foster, whom Katherine had taken under her wing, and Phillip, began to commiserate over Katherine’s poor treatment of them and soon began an affair and fell in love. In what would be a pivotal story, still being brought up on the show today, a drunken Katherine drove the car over a cliff in reaction to the news that her husband wanted to be with Jill. He eventually died but survived long enough to wed a pregnant Jill from his hospital bed. This was the beginning of the bitter rivalry between Katherine and Jill that has spanned until the present day – even surviving the news in later years, that they are actually mother and daughter! 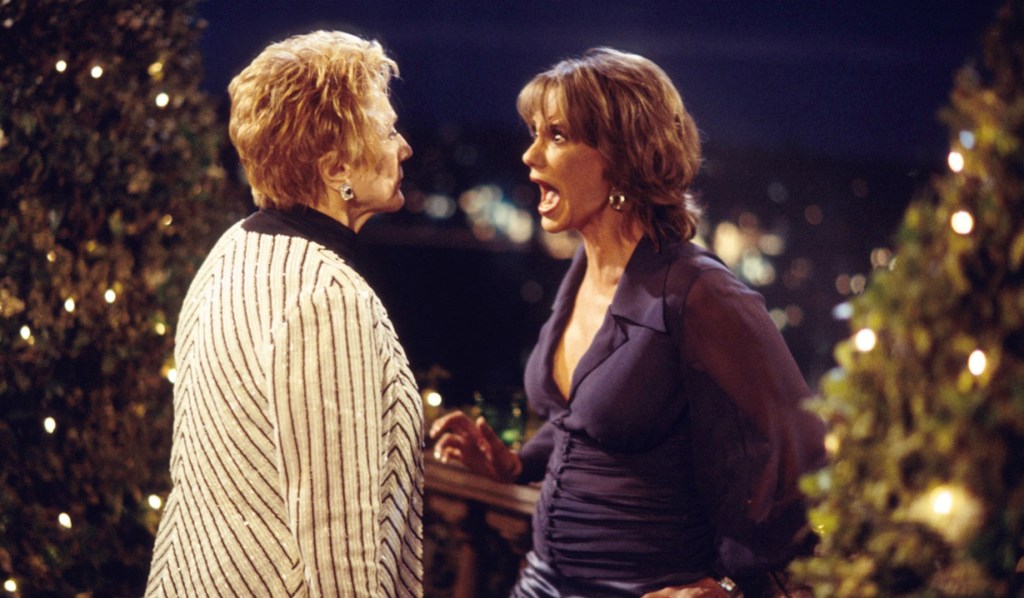 Katherine, of course, had a previous marriage to Gary Reynolds, who fathered her son Brock (Beau Kazer). They spent a year apart before their union ended, and during this time, Katherine conducted an affair with Gary’s friend, Arthur Hendricks, who later was revealed as Jill’s father.

Another notable relationship in Katherine’s life was her marriage to Derek Thurston (Joe LaDue), which wasn’t all it was cracked up to be – in fact, it was Katherine who cracked up! Katherine seduced and married Derek in an act of revenge on Jill, who had met and fallen in love with him while working at the Golden Comb. Derek’s ex-spouse soon turned up and they devised a plan to drive Katherine mental and thereby end up with her fortune. It seemed to work, and Katherine was committed to a psycho ward. Later, in an attempt by Derek to hang on to his job at Chancellor Industries, he arranged a second honeymoon aboard a yacht. Katherine, realizing that her marriage was a sham, jumped overboard, and wound up building a relationship with the man who found her – Felipe. She almost died, but was rescued and brought back to Genoa City by Douglas Austin.

Of course, we can’t forget Katherine’s husband Rex Sterling (Quinn Redeker). Another man that she fought with Jill over, Rex was actually a conman named Brian Romalotti (Gina and Danny’s estranged father), hired by Jill in a scheme against Katherine. Much to Jill’s chagrin, however, they actually fell in love and got married. During this time, Katherine was the victim of her evil double, Marge, who, posing as Katherine, destroyed her marriage to Rex. Jill ended up marrying him, but eventually, the truth was exposed and Rex and Katherine were reunited. Tragically, he died when he was shot by a prowler. 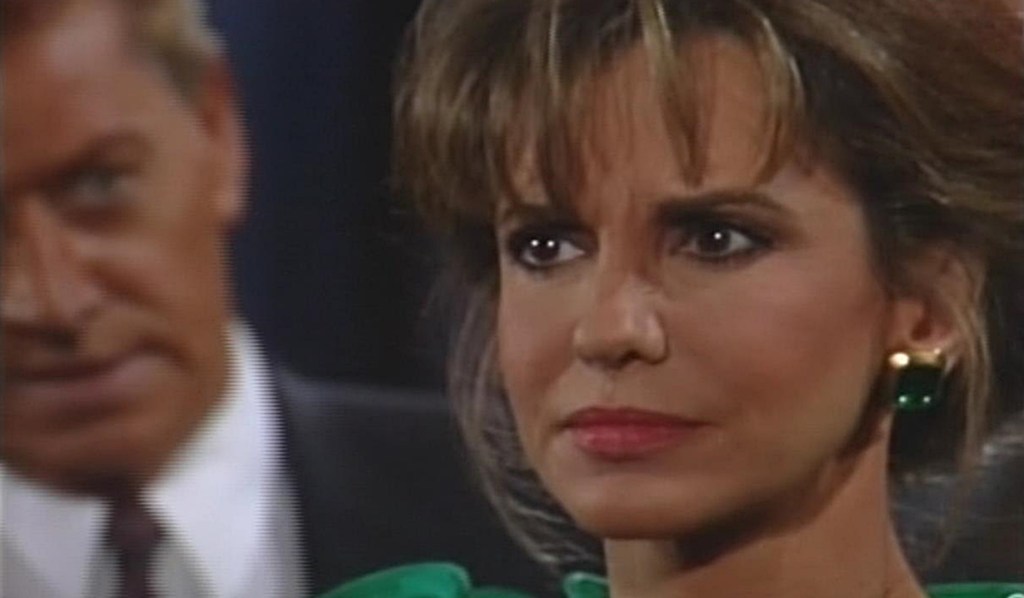 Katherine has endured much over the years, including the reveal that she gave away Jill’s son. Only recently it came out that Cane Ashby (Daniel Goddard) is actually Jill’s biological child. Katherine has two other grandchildren, Mackenzie (Brock’s daughter), and Billy Abbott (Jill’s son with John Abbott).

Other memorable storylines in Katherine’s history have been the massive heart attack she suffered upon learning that Jill was actually her daughter, and not-to-be-forgotten, her live television face-lift! Jeanne actually underwent a face-lift in real life and allowed it to be shown on the Young and the Restless as Katherine’s plastic surgery. Later, viewers were able to see Jeanne’s real-life reaction to her bandages being removed, as Katherine’s were removed on the show. This was a truly amazing thing – a first for television at that time. 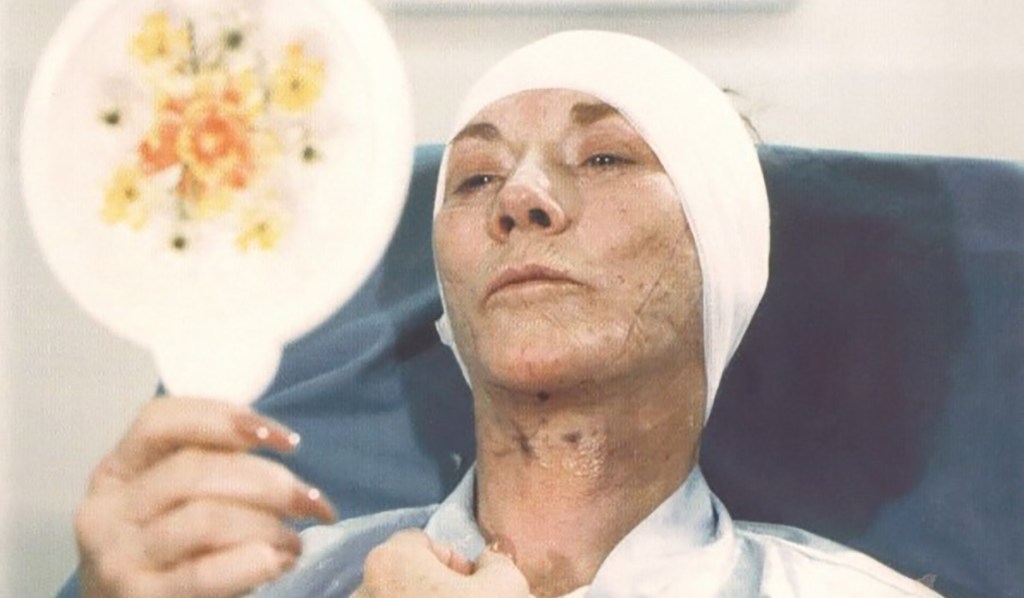 Currently, Katherine is taking yet another young woman under her wing, her grandson Cane’s ex-wife, Amber Moore (Adrienne Frantz), who is helping her write her memoir. She is struggling with a recent health crisis and the idea of stepping away from Chancellor Industries for the first time in her life. Soaps.com is happy to report that the drama is still coming for the inimitable Katherine Chancellor! Read about Katherine’s greatest rival (and daughter!) Jill Foster Abbott.