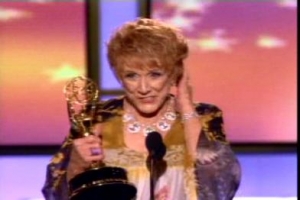 What a treat for Soaps.com readers! With the help of Deanna Barnert from our sister site, Soap Opera Fan, we were able to connect with the incredible actress Jeanne Cooper, who plays Katherine Chancellor! As all fans of The Young and the Restless know, Jeanne was named this year’s Outstanding Lead Actress at the Daytime Emmy Awards. Unbelievably, even though she had been presented with a Lifetime Achievement Award previously, this was Jeanne’s first Emmy Award in all of her years in daytime television! Here’s what Jeanne had to say about her win:

Jeanne – Oh boy, it’s just wonderful. I was so excited when I heard my name. I didn’t think I had a chance. I wasn’t even going to go!

Deanna – What if you hadn’t gone?

Jeanne – Oh honey, I can’t tell you! I probably would have buried myself.

Jeanne – (laughs) I heard a lot of that. Peter (Bergman, Jack Abbott) said he was sure I was going to go up and say, “It’s about (expletive) time!” It did come to mind, but I controlled myself. (laughs) People were really excited for me, which just adds to it all. It’s really made it that much more special, to have all this excitement from my costars and the other nominees in my category. I sat down at the CBS party, plopped my Emmy on the table and let them come to me. I lasted till 12:30! Michelle (Stafford, Phyllis Summers Abbott Newman) told me to enjoy it, because Monday it was back to the grind!

Deanna – And how was Monday at work?

Jeanne – Michelle had this magnificent congratulations cake for my Emmy. That cake was out of this world. Everyone dropped by and had a piece. At the end of the day, our stage manager, Tom, said, “Let’s hear it for our Jeanne!” It was sweet, because there were a lot of people on stage. I had people coming up to me all day long. So many people at CBS said, “Thank you: You made us famous by calling us lousy!” Everyone loved that. Everybody’s always saying how great everyone else is. I figured I’d go another way. It was fun!

Jeanne – It’s still coming, but it’s starting to slow down. Peter said the first week, you keep running things over in your mind, in flashback, and you do. But then you get a few bills in the mail and reality sets in.

Deanna – Where is the Emmy?

Jeanne – It’s been on the table, as you come in the house, with all the flowers and what have you. I went and got the Lifetime Achievement one, set it up next to the new one and said, “Now, you mean something!”

Deanna – [Tell us about] your dress!

Jeanne – My dress was what made me go to the Emmys, to begin with! (laughs) Gino Columbo, my hair/make guy, stylist and longtime friend, said, “You cannot think of NOT going!” Then he called and said, “Go to Etro on Rodeo and ask for Fabi. There’s a dress that’s gorgeous. It’s you! You must!” I went by, but there was no place to park, so I asked someone to go get Fabi for me. There she is showing me the gown in the streets of Rodeo Dr., but I had to go to my grandson’s graduation. I said, “I’ll come back and try it on tomorrow! Hold it for me.” Then I went home and forgot all about it. I ran over with Gino and I’m looking at myself in it and I said, “Okay, I’ll go.” They got the alterations done fast, sent it over to the studio and Jennifer (Johns, Y&R costume designer) found some bling to go with it. The next day, there I am making up in the middle of the morning. It’s like dressing up and going to a movie in the afternoon! I always feel when we get to the end of the red carpet they should give us a box of milk duds and a carton of popcorn for the movie. They had tables this year, which was fantastic, instead of sitting in the theater next to two fella’s.

Soaps.com would like to thank Jeanne Cooper, and offer her huge congratulations on behalf of our staff and readers! Thanks also to Deanna Barnert for sharing her chat with us! Here’s to another fabulous year for Jeanne on The Young and the Restless! May it be filled with Emmy material for next year’s reels! 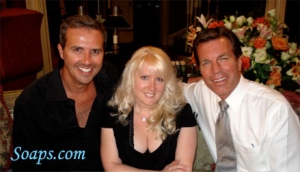 Soaps.com's The Young and The Restless set visit was one of a kind 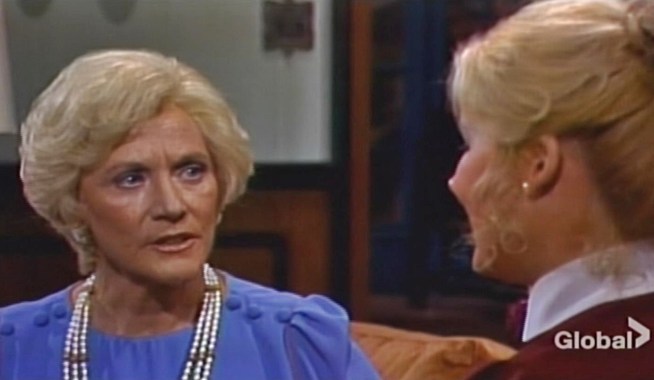