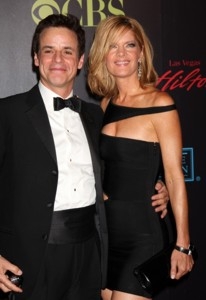 “The Young and the Restless” actors, Christian LeBlanc (Michael Baldwin) and Michelle Stafford (Phyllis Summers) will be taking part in a special theatrical event out front of the Los Angeles Theater Center (LATC) at 514 South Spring Street in Los Angeles, California on September 27. The event, which will run from 8.30 PM to 11.30 PM, will consist of twenty minutes of performance art including poetry, singing homeless, nuns on bikes, stilt walkers, a gospel choir and bubbles. This will be the first of twenty, 20 minute, short plays produced by donations of $20 per producer in celebration of the Playwrights’ Arena’s 20th anniversary. Further information can be found at Playwrights’ Arena.

Do you plan to attend this event? Let Soaps.com know by voting below.

Read about another upcoming "Y&R" actor event through Wildcard Weekend With The Young And The Restless’s Daniel Goddard and Christel Khalil. Join us on Twitter @soapoperafan and Facebook. Come tweet and Facebook with us about "The Young and the Restless," all the other soap operas, "Glee" "Grey's Anatomy," and "Vampire Diaries!"