Interview: The Young And The Restless’s Sean Kanan 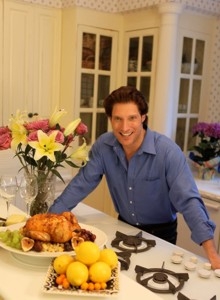 “I think my fans from Daytime will enjoy this book.”

Sean Kanan’s new book, The Modern Gentleman: Cooking and Entertaining With Sean Kanan, goes beyond ‘a cookbook’ and has the potential to appeal to all kinds of readers – not just men. Readers will be drawn in by the easy and witty writing style, the attention to detail, and all of Sean’s fans will be thrilled with the personal anecdotes within. Those who read this book will learn that a man can treat his date or significant other with class and still be cool at the same time, and Sean lays out exactly how to get there by sharing his own travel, culinary, entertaining, and life experiences. The recipes look amazing, and if the kitchen intimidates you, the detail provided about how to approach gourmet cooking is impressive. If you buy the book through The Modern Gentleman, Sean will autograph your copy. Keep reading to hear what Sean told Soaps.com about the book, his busy life right now, and his role in Daytime.

Soaps.com: Your book is so much more than a cookbook, what is the larger concept here?

Sean: I think a lot of guys are confused in the sense that they’re saying, “Am I supposed to be the guy who talks about my feelings – sensitive, vulnerable, communicative – or am I supposed to be the Alpha male – strong, able to take charge, and a problem-solver?” The fact of the matter is it’s somewhere in between and a bit of both. So, really what this book is about is how to take the very best of guys from a generation ago, like Gregory Peck, Paul Newman, Steve McQueen, who know what it was to be a ‘guy’s guy’ and a gentleman effortlessly, and the development that men achieved as a result of the women’s movement, and fuse them together. To help guys become better guys, and to help women understand how guys think (or at least how this guy thinks). That’s the essence of it – that’s one part of it. The other part of it is to teach men, or women, how to use food as a metaphor for connection, how to get in touch with your authentic self, and to learn to engage the senses in the way of engaging people.

Soaps.com: It was interesting that the book went beyond ‘these are the utensils you use, these are the recipes, and this is how you set the table’. You have chapters on entertaining, languages, and even how to buy a diamond ring. What made you decide to take it there?

Sean: I’ve had the good fortune of leading a pretty interesting life. I’ve learned a lot along the way, I’ve made a lot of mistakes, and I’ve been involved with some very interesting women who taught me a lot of stuff. I love to throw dinner parties; a lot of people who have been to my parties say, “Wow, you should open up a restaurant.” That’s probably the quickest way for someone who doesn’t know about the restaurant business to be separated from their money, so I decided to write a book. It began as a more traditional cookbook, and very quickly I realized that I had the opportunity to make more of an impact. In the book I talk about my work with the anti-defamation league – I wanted to find a way to bridge the gap and see what that nexus was between my work with bullying and cyber-bullying and the book. As Michele [Sean’s girlfriend] said, young men who are taught to be gentlemen grow up to be tolerant, giving, loving, strong guys, as opposed to growing up to be insecure bullies. I wanted to fuse my passion for cooking with what I’ve learned about being a guy.

Soaps.com: Your experiences in Italy also figure into the book.

Sean: My experiences in Italy had a profound effect on me. I learned how to speak Italian and I have lifelong friends in Italy. It started out when I was on “The Bold and the Beautiful” and I realized how popular the show was there – something sparked in me, and I realized if I could learn to speak Italian I could probably have an entire second career. I still study every day. When you live in a foreign country, you learn what it means to be a gentleman in a different culture. I also learned some great cooking lessons in Italy. It’s little bits and pieces of my life – I didn’t expect the book to be quite as autobiographical as it turned out to be. I’m working on another book right now that is even more autobiographical and has nothing to do with cooking. It’s kind of like a ‘Chicken Soup for the Soul/Don’t Sweat the Small Stuff’, but in a much more detailed way using my life experiences as a backdrop.

Soaps.com: You’ve got some marketing and contests happening related to The Modern Gentleman?

Sean: Yes, if people would please follow me on Twitter @seankanan. Also, I’m doing a blog right now, leading up to the book coming out, and trying to be really honest and candid about what it’s like. I’m doing one contest where I’m going to give an exact replica of my ‘Elvis Kit’ [from the book] to someone once 10,000 people ‘like’ the book’s Facebook site. I’m also giving three autographed black belts away – because I was in “Karate Kid III” – when I get 5,000 followers on Twitter. There are three beautiful black belts with the person’s name written in silver and a picture of myself and Ralph Macchio from “Karate Kid” for the winners.

Soaps.com: The book is available for pre-order right now?

Sean: Yes, the book is available for pre-order. It comes out on September 13, and people can buy it on Amazon or through my website, where I will be glad to sign it for them if they like.

Soaps.com: Do you have any other appearances coming up besides your book signings?

Sean: I will be appearing on Red Eye on FOX News, which I’m recurring on. I tape it on September 12 and it will air at 3.00 AM EST September 13.

Soaps.com: I heard a funny story about your hair color the other day…

Sean: Oh my God! I did this feature called, My Trip To The Darkside, and I was playing an Italian guy so I dyed my hair dark brown. I was doing the show and it was dark brown – they didn’t seem to notice on “Y&R” – but I was like, “I want to go back to my normal color,” so Michele, my lovely girlfriend, she tried to help me pull out the dark and it went orange! [laughs] So, I was a ‘ginger’ for a couple days.

Soaps.com: What else are you working on?

Sean: I did back-to-back independent films, both of which have not come out yet, and it looks like I’m going to be playing the lead in a film called “Angel Falls,” which is kind of going to be a big deal for me. I’ve been in meetings with the producers and director and it’s one of the best scripts I’ve read in the last five years.

Sean: The last stuff I taped was with Michelle Stafford [Phyllis] where I was sort of starting to date her and tell her I was aware of inconsistencies in her story with the murder of Diane [Maura West]. It looks like there’s something going on [with Deacon and Phyllis] and then it just stops. I have no idea what is going on with my character over there. I have no idea when I’m working next. I have no shows scheduled, and I don’t know if they’re going to be calling me to return, or if I will be available to return if they call me.

Soaps.com: Soaps.com readers have been speculating on the message boards about Deacon returning to “B&B.”

Sean: I saw that too, and I don’t think that’s true either, although that is something I would really love to do. I’ve made no bones about that at all. That was such a great, fun time in my life and I loved working with Brad Bell. I loved what Brad would write for me. If Brad called me to come back and I was available to do it, I would love to. There’s a lot of reason [for the character] to go back.

"I appreciate all of the support the fans have given me, they’ve been very kind over the years, and if they like me and like the character that I play, I certainly talk about some of my experiences in Daytime in the book – not a whole lot - I touch on it," Sean stated. "In the new book I’m doing I talk about it a lot more, but I think my fans from Daytime will enjoy this book."