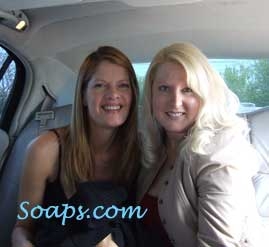 What can I say about Michelle Stafford except that I love, love, love her, even more so after hanging out with her in her limo on Saturday afternoon in my home town of Toronto. Picture seven of us piled into the back of a limo, dishing about her Emmy nomination, the differences between herself and her alter ego, Phyllis, and her love of country music! It was a blast!

Soaps.com received word on Friday May 9 that Michelle Stafford was heading to a local flea market in Toronto May 10 to answer questions and sign autographs. Fans were to purchase glossy photographs of Michelle for a nominal fee for her to sign, with the proceeds of the sale of the photographs going toward ending breast cancer. Since I’m in Toronto, I had to do some fast work in contacting a few of my pals at “Y&R” as well as Michelle’s publicist to request some time to chat with the ultra popular actress the next day. Everything worked out in the end, as it usually does, and Saturday we headed to the Fleastival Flea Market in Etobicoke, Ontario. Five of us (my entourage) piled into the limo along with Michelle and her publicist. We chit-chatted idly about our previous night’s plans, and Michelle mentioned that she had slept on the red-eye on her way to Toronto, and my friend, Gregg explained that the rest of us were at his place, (AKA, the Chancellor Mansion) the night before having a “Y&R” Barbeque. Gregg Brown, for those of you who listen to my Friday Y&R guest segment on ProudFM know that he is known as Gregg Brown-Chancellor-Abbott-Newman-Winters-Bardwell.

We discussed Soaps.com and how our staff does their best to ensure our message boards are well moderated, and how we discourage and remove any actor and actress bashing from our forums. Michelle was clearly impressed with this and said, “The internet has made a turn in the last six months… What with the growth of Youtube, and the way people splice up videos, there is no control over it! You can completely make someone look like a moron by cutting up a video and make them look completely different. You know, you can’t do that on TV, you’d get sued,” she exclaims. Though she doesn’t frequent them, currently, she found herself on a message board in the past and mentioned how upset she was to read a few posts that got personal with her and Sharon Case. She doesn’t visit go to the boards anymore, and we got a taste of why, when she verbalized her displeasure at reading how they’d pit Sharon against Michelle, comparing the two actresses in a derogatory fashion. Being that they’re friends outside of “Genoa City,” one can see how this would cause some annoyance – and this is precisely why we don’t allow this kind of talk in our boards. In fact, while she was answering questions later inside the flea market, Michelle was very clear when she asked the fans not to post things like that on the boards.

When I asked Michelle her honest perspective on the whole storyline with Phyllis, Nick (Joshua Morrow), Sharon (Sharon Case) and Jack (Peter Bergman), and the dynamic of them working at Restless Style together, she told me, "I think that you have four people who've hurt each other a lot, so you have to play that dynamic. You can't play that they're all okay with each other. They've hurt each other a lot…. I have boyfriends from five years ago that I'll be cool with, but the minute they say something that reminds me of something they did, I'm like, 'Hey!' And it brings up everything in your life, so you have to play the reality of the relationship." Recent posters questioned why Sharon Newman was so distraught when she witnessed Phyllis hunting for anniversary gifts during The Anniversary Show on May 1. I asked Michelle to voice her thoughts on this and Michelle, as well as myself, thought it was understandable. "That's kind of cruel. I sort of tried to play it, like when the cake came out… Oh, okay let's put it away, because that's kind of cruel and insensitive. I think the fans who understand Sharon's point of view are the Sharon fans." I argued that I like both Sharon and Phyllis and didn't label myself a "Phick" or "Shick" fan, but even I understood Sharon's point of view. Michelle says she doesn't get involved. "I'm not a Phyllis and Nick fan. I'm just doing my job... paying my mortgage!" Well said.

I could barely get the words out for this next question because I was laughing so hard, but I had to ask Michelle the differences between Michelle and Phyllis! Michelle joked that Phyllis has bigger breasts than she does and then after the laughter died down, Michelle says, "I'd like to think I'm more moral than my friend Phyllis!" Well, that started the laughter up again. Due to one of our Friday segments on ProudFM, where we had discussed Trace Adkins coming to “Y&R,” I had to ask if Michelle was a true country fan. "I personally am. The writer who wrote all that stuff when they went to the country bar in Santa Fe and she (Phyllis) knew how to line dance out of the blue… It wasn't part of the character and I don't think the head writer knew that I liked country music, actually, and knew how to line dance, but all of a sudden, Phyllis loved Country music!" So does she! "I like the lifestyle, I like the songs, even if it's (and she twangs), My big toe..., I like it!"

Michelle told us her reaction to getting the Daytime Emmy nod, "It's a surprise. It's always a surprise. I'm completely grateful, always." I love honesty and Michelle was so honest when I mentioned how I disliked reading those interviews with other actors who claim that everyone deserves recognition for what they're doing. Michelle piped up with a resounding, "No! What is that? I'm willing to lose; I'm willing not to be nominated. There's next year!" I asked her if there was someone she felt specifically deserved a nod this year and Michelle says, "It's kind of a game, sometimes you get it sometimes you don’t. I don't even go there unless somebody was spectacular and had a spectacular storyline and they didn't get it, I'd be like, wow!" To address the common question on how fans feel that CBS seems to always dominate the categories with the Daytime Emmys, Michelle weighed in on this, though she admitted she wasn't sure what to say. "They looked at everybody. I voted in a category and I looked at 24 women in one category and it was the most fair it's ever been," she exclaimed. "I don't know what to say about it, know what I mean? I know CBS sort of dominated, [in the past] but I don't know why." I should mention that I asked this specifically because of all of the negative comments that I read from a Daytime Emmys article.

Wrapping things up, as it was time for Michelle to head into the flea market, we took a few photos and said our goodbyes and thanked her for her time. I should apologize to those who waited patiently for her, while we chit chatted, but in Michelle's words, "This was so much fun!" It was hard to tear ourselves away, so while I'm sorry you had to wait for her because of us, I don't think you'll disagree that she was well worth the wait. For those who didn't make the "Meet and Greet," you missed out on a great gal! Make sure you check our Y&R News Room for updates on when you can see Michelle Stafford soon, and don't forget to head over to Soaps.com's Facebook for more photos of Michelle!

Tyler Smith: 5 Things To Know About Granger Smith’s Brother Who’s On ‘The Bachelorette’