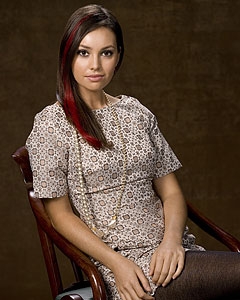 Soaps.com recently had an opportunity to catch up with The Young and the Restless star Emily O’Brien, who has received a Daytime Emmy nomination as ‘Outstanding Younger Actress’ for her role as Jana Hawkes! Soaps.com readers – enjoy!

Soaps.com: Could you please tell us all about how you found out about your Daytime Emmy nomination?! Where were you? What was your initial reaction? Who did you call?

Emily: I was sleeping when the nominations were announced on “The View”. When my phone started ringing at 8:25 in the morning I knew that it had happened and I was overwhelmed! I called my mom first when I had a second to use the phone without it ringing! That was such an exciting day…

Soaps.com: Could you tell us which scenes you felt were your best last year, and which storyline(s) engaged you the most as an actress?

Emily: I really enjoyed my scenes in the hospital during the brain tumor storyline. I did a lot of research so that my performance would be as genuine as possible and I learned so much from watching videos and speaking to nurses and reading numerous articles on tumors. Because there are many different types which result in certain side effects, I had to choose what type of tumor Jana had and what kind of performance I would deliver. That was a great experience for me as an actress.

Soaps.com: Your co-star, Greg Rikaart received a nomination as well. How do you feel about that?

Emily: I must say that I am not surprised. he is just wonderful…

Soaps.com: Also nominated in your category are Vail Bloom (Heather) and Tammin Sursok (Colleen). You must all be so thrilled! Have you spoken to either of them about the Y&R ‘triple threat’?!

Emily: Yes! It’s so fun knowing that our show has 3 nominations in that category!! I haven’t yet really had a chance to congratulate them…

Soaps.com: What are your thoughts on The Young and the Restless being nominated, once again, for ‘Outstanding Daytime Drama’? What storylines stand out in your mind from last year as being Emmy-worthy?

Emily: It is such an honor to be a part of this cast and to be on such a well constructed show. I feel that the scenes that are particularly Emmy-worthy are the “Out of the Ashes” scenes.

Soaps.com: What plans have you made, if any, with regard to Emmy Night? How excited are you?

Emily: No plans yet! I am just taking it easy until the big night…

Soaps.com would like to thank Emily for taking the time to give us a sneak peek into her Daytime Emmy nomination experience! We would also like to wish her the best of luck on the big night! Emily, we’ll be cheering you on! For a peek at Amy Mistretta’s previous interview with Emily click here!