The Young and the Restless – Adam Gets a Life!

Soaps.com readers who have been hoping to find out more about the past of Y&R’s Adam Wilson/Victor Jr. (Chris Engen) are in luck! Industry sources are reporting that early next week, we’ll get our first peek at Adam’s mysterious New York girlfriend!

Adam, who came to Genoa City after his mother, Hope (Signy Coleman) passed away, has been working for newly discovered father, Victor Newman, and is seemingly bent on antagonizing his half-siblings, Nick (Joshua Morrow) and Victoria (Amelia Heinle) as much as possible. His offbeat behavior, bizarre, sniping comments, and flirtation with his brother’s wife, have had Y&R fans wondering what the slick little Harvard graduate is really all about! As the angelic Hope’s son, he sometimes seems to possess her kindness and naivety, but at other times, comes across as being manipulative and egotistical, and much more like his father, “The Victator”, then Hope would ever want to believe!

Adam’s girlfriend, or ex-girlfriend, as the case may be, on Y&R, is named Skye, and will be played by actress Laura Stone. Laura has previously had small roles on television programs such as “Reunion”, “Freddie” and “Seventh Heaven”, and in the feature film, “Dirty Work”!

Soaps.com would like to welcome Laura to the cast of The Young and the Restless! We’ll be tuned in on April 29th just waiting to see what clues Skye’s arrival will give us into the true personality and motivations of the enigmatic Adam/Vic Jr!

The Young and the Restless's Joshua Morrow a Third-Time Dad!

Numerous Daytime Emmy Noms for The Young and the Restless! 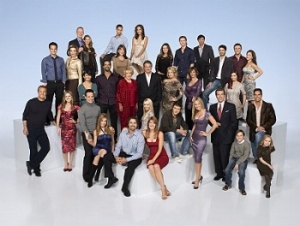