Before the race, I asked Daniel who he thought was his biggest competition, to which he diplomatically replied, "The funny thing about the celebrity contingent this year is that I think everyone is so evenly, it's a very, very close race and I think that all the cars are even and the track is a good passing track." He further speculated, "I think it's who keeps their composure, who doesn't overdrive the car, who doesn't push too hard and keeps themselves in check. It's only ten laps. If you make a mistake, you won't make up for it, so I think everybody's got a fair shot at it."

A huge motorsports fan who was dubbed, "The Young and the Reckless" by his fellow drivers, Daniel is pleased that the celebrity participation will help benefit worthwhile charities. Each celebrity driver will have $5,000 donated in their name to "Racing for Kids," which is a non-profit program benefiting children's hospitals in Long Beach and Orange County, CA. An additional $5,000 will go to the charity of the celebrity winner's choice, in this case Jamie Little's charity, and a $15,000 donation will be made in conjunction with the "PEOPLE Pole Award," which honors the pole-position winner of the qualifying session that was held the day before. This year, that honor was bestowed upon Pixar animation director/producer Brad Lewis.

Had he won, Daniel would have given his additional check to a charity he donates to regularly, AbilityFirst, which provides programs and services for children and adults with disabilities. Goddard supports the organization because, "I couldn't imagine what it would be like to be healthy and at the same time not have the ability to run, to play and do things every kid wants to do."

As a husband and father of a two year old, I asked what his wife, Rachel thought about him participating in the potentially dangerous event. Daniel beamed, "I'm very fortunate because not only does she stand by me with my career, (pauses) I think the great thing about a good relationship with anybody is whether they champion you when you really do have a belief or passion in something. You know it's something special when you find that partner that says, 'I want you to be the best at whatever you want to do.' I'm very lucky for that."

Indeed he his. Soaps.com would like to congratulate Daniel on his impressive showing at the 2008 Toyota Pro/Celebrity Race and thank him for sharing his experience with us.

Click here for more information on the 2008 Toyota Pro/Celebrity Race. 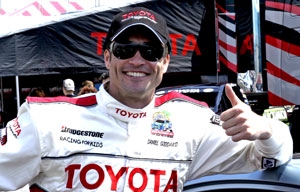 The final odds going into the Toyota Pro/Celebrity Race on Daniel Goddard (Cane) were 26-1. Las Vegas gaming expert Anthony Curtis projected that if Daniel wanted to win, he’d need to tone done his enthusiasm. Even though he didn’t come in first, Goddard may have taken those words to heart, as he came in second place for the celebrity drivers and third place overall, beating out five pro racers and ten other celebrity opponents!

I had the opportunity to go to the race and talk with Daniel before and after about the high-speed event.

Held in Long Beach, CA on April 19th, Daniel qualified for an eighth place starting position the day before, and along with the other celebrity drivers, received a thirty second head start on the pro racers. When I caught up with Daniel immediately after the race, he summed up his third place finish by stating, “I felt good. I felt like I drove my own race. I didn’t overdrive the car, I had a good strategy at the beginning. It paid off.”

Celebrity driver Jamie Little (ESPN Pit reporter) finished in first place, with pro driver Mike Skinner coming in at a close second. Apparently Skinner was a key element in Daniel’s performance, as Goddard’s co-star and two time Toyota Pro/Celebrity driver, Joshua Morrow (Nicholas) advised him to, “Get with Skinner and just drive with [him].” Which is what the Y&R actor did, as he explained, “I was really happy to have Mike Skinner come up behind me at that speed to push me a long a little more. I felt like I had more speed in the car and then it just unfolded and unfolded well.”

While he took Morrow’s advice, Daniel let it be known that he won’t hesitate to brag about placing higher than his co-worker, as he joked, “I’m ecstatic because Josh finished 3rd last year (for celebrities), so at least I get to go back to work and say I came in second! But then he’ll go, ‘You got beaten by a girl!’ And I’ll say, ‘That’s not a girl. That’s a driver!'”

The 32-year-old celebrity race reserves one spot each year for a soap opera personality, with past years seeing stars such as Morrow, Peter Reckell (Bo, Days of Our Lives) and Ingo Rademacher (Jax, General Hospital ) taking the wheel. There’s apparently no real rhyme or reason to who gets picked, as Daniel explained, “The process is you just submit your name and say, ‘I’d like to do it.’ I know that Braeden (Victor) wanted to do it. I think Stafford (Phyllis) tried to do it and I heard Bryton (Devon) wanted to do it as well. I was just the very lucky person that was chosen,” he smiled.

The Young and the Restless's Joshua Morrow a Third-Time Dad!