Read how Tracey fits in as The Young And The Restless Launches Jabot Cosmetics Line. Join us on Twitter @soapoperafan and Facebook. Come tweet and Facebook with us about "The Young and the Restless," all the other soap operas, "Glee" "Grey's Anatomy," and "Vampire Diaries!" 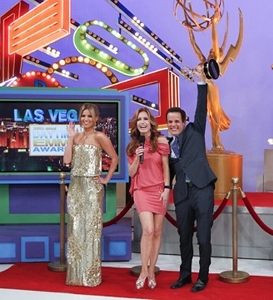 Actor Christian LeBlanc and actress Tracey Bregman (Michael Baldwin and Lauren Fenmore Baldwin, “The Young and the Restless”), will be appearing on “The Price Is Right” on June 16 in celebration of the upcoming 38th Annual Daytime Emmy Awards. The soap stars will be joining model Amber Lancaster for some fun and laughs.

Will you tune in to see Christian and Tracey on “The Price Is Right?” Let Soaps.com know by casting your vote in our snap poll below.

The Young And The Restless Saturday Teaser Poll: Katherine's Next Move