Soaps.com Chats With The Young And The Restless’ Michael Muhney: Part II

Michael: I have a lot of respect for the writing, so I don't do any haphazard ad-libbing. I've got to be careful not to sound like someone who's taking credit for the writing because I'm not the one writing the show. But I certainly have Adam's voice figured out in my head, and his sense of humor and sarcasm. If something is within character for him to say to somebody, I don't mind tweaking things. Little colloquialisms are okay if they're added in a responsible manner. The producers are very supportive of my decisions and it's a great team to collaborate with.

Soaps.com: Adam's sarcasm has me in stitches sometimes, honestly.

Michael: Some of the stuff that comes out of Adam's mouth, like when he said to Jack [Peter Bergman], "That hole in the middle of your face that keeps making noise? Why don't you shut it?" [chuckles] If I could define Adam's snarkiness in one sentence, I would say that Adam makes a cerebral attempt to say, "F*ck you," every chance that he gets. But it's finding a clever, respectable way to say, "F*ck you," that makes it entertaining.

Soaps.com: You've responded to this multiple times on Twitter, but let's settle the score once and for all. What's the deal with Adam's blindness?

Michael: This is exhausting for me. [chuckles] There's a universally different definition between "blind" and "legally blind." Adam is not at all blind, he has retinitis pigmentosa. I take what I do very seriously, and I've sat down on two different occasions with two different people who have this condition. I've asked them questions, walked with them, and watched them take their steps and move around. When you have retinitis pigmentosa, especially at an early stage, you're very functional. You may sometimes see them reach with their hand when they're rounding a corner or being seated, just to feel out their periphery.

Soaps.com: So it's confirmed, Adam can see?

Michael: Adam can see straight ahead, 20/20. Everything's fine. It's the outer reaches of his peripheral vision that's black. There's two major areas where I think things got muddy for the viewers. For one, a couple years back Adam was trying to lead certain people to believe that he was more vision impaired than he really is. The audience wasn't sure what to believe. Secondly, I came into the storyline when Adam was exaggerating his condition, so I had my take on that. After some discussion with CBS, we decided to have me play Adam's eyesight the way it would be for anyone with retinitis pigmentosa. Anything straight ahead, Adam has the same vision as anyone with perfect eyesight.

Soaps.com: Looking ahead, any hints about what the future holds for Adam Newman?

Michael: [pauses] I can safely say that Adam is going to continually keep his feet moving so you can't really knock him off balance. There's going to be a few really big punches that he's going to take soon. The true mark of a strong person is not how many times he gets knocked down, but how many times he gets back up. There's a grand design for Adam to slowly take on more form and function like his father. There is a necessity over time for Adam to accumulate more power and more wealth, sometimes by honest means, and sometimes with vindictive intentions. Then again, that's how Victor operated to win and gain control. Adam will really start to spread his wings, and become even more of a legitimate force to be reckoned with in Genoa City.

Missed Part I of our exclusive chat with Michael, where he discussed Adam's feelings about his dastardly deeds, how Adam fits into the Newman family and the truth behind Adam's feelings for Sharon? Check out Soaps.com Chats With The Young And The Restless' Michael Muhney: Part I.

Have something to say regarding Michael Muhney or Adam Newman? Feel free to share your opinion in the comment section below! Join us on Twitter @soapoperafan, and Facebook. Come tweet and Facebook with us about "The Young and the Restless," all the other soap operas, "Glee," "Grey’s Anatomy" and "Vampire Diaries!" 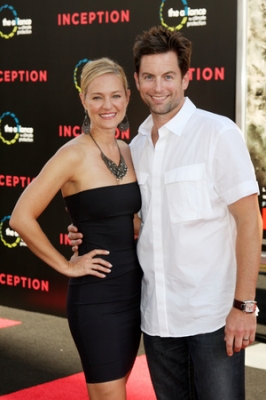 “Phyllis gets under Adam’s skin, but there’s also an attraction there…”

Soaps.com recently sat down to chat with “The Young and the Restless” star Michael Muhney, who plays the “black sheep” Adam Newman in Genoa City’s most infamous family. In Part II of this Soaps.com exclusive, Michael gets candid about the probability of a long-term relationship between Adam and Sharon, the possibility of a hook-up between Adam and Phyllis, the truth behind Adam’s blindness, and much more!

Soaps.com: Based on everything we know about Adam, do you think a future between him and Sharon [Sharon Case] is actually possible?

Michael: Is it possible? Yes. Is it probable? No. Even in the best of circumstances, with two white-washed characters, they’re not interesting to watch for longer than several years. If you want to see people happily married with things working out, then just turn your TV off and hang out with your own family. But if you want to see the heightened drama, well Adam and Sharon’s relationship is severely handicapped from the get-go. Will they be able to persevere? I think they have rather large hurdles ahead of them. But there’s no question in my mind that Adam truly wants Sharon.

Soaps.com: Viewers are raving about Phyllis and Adam’s recent trip to Thailand, stating that the on-screen chemistry between you and Michelle [Stafford] is electric. Any chance we’d ever see a hookup between these two characters?

Michael: That’s an interesting question and an interesting reaction by folks watching the show. We have to be careful with storytelling to not let two characters romantically hook up just because there’s chemistry. I think some of the most powerful relationships I’ve seen on screen have been moonlighting characters. As an audience, it’s often better to be wanting it than actually seeing it. What’s interesting about Phyllis and Adam is that there’s so much distaste between the characters, but almost this unspoken respect between the two of them. When someone walks into a room with a big set of brass balls, and they notice someone else has balls of similar size, you tend to tip your hat to them and go, “Good for you!”

Michael: Yes, Phyllis gets under Adam’s skin, but there’s also an attraction there. It doesn’t have to be a sexual attraction, though. It’s like you being attracted to the bright lights on the Vegas strip. I think Adam doesn’t mind having them put their heads together and work together. I’m thrilled to know that many people enjoy the Phyllis-Adam relationship. For the future, what makes their relationship important, is that they’re not having sex. I think it would be out of character for the two to get physical with one another.

Soaps.com: Your character throws out so many quick zingers to the people around him, whether it’s Phyllis, Victor [Eric Braeden] or anyone else. Do you ad-lib any of those quirky lines?

The Young And The Restless Weekly Video Promo: Sharon's Fate

The Young And The Restless Video Promo: Chloe and Gloria Speculate About Jana