Soaps.com Chats With The Young And The Restless’ Michael Muhney: Part I

Soaps.com: What's really going on in Adam's head with respect to his father?

Michael: I play Adam where he has that alpha male quality, walking around with such bravado, but deep down he's actually very hurt and very insecure. There's a sense of strength and power that Adam carries around Victor, and he does have that strength and power. But within Adam, there's also a broken little boy that never understood why his father, who had all the means in the world to be involved in his life, never made any more attempts than he did. It's almost like petting a snake. You just don't know with Adam. I've got this image in my head where Victor wants to stroke Adam's back and show him that he cares. The question is, will the snake instinctively attack? Or will he be docile and accept that kind of an olive branch?

Soaps.com: What do you think Adam would do?

Michael: I don't know. The more ambiguity there is in a story, the better. For me, things start to get boring once something becomes clear-cut. Nemesis, friend or foe? I like to dangle from the precipice of ambiguity and stay in the grey area without being a good or bad character. I think as humans, we're smarter than we give ourselves credit for. The truth is, we see human interaction all the time and something in our gut tells us if something is right. Viewers want to figure out the mystery that is Adam Newman. I like to keep him as complicated as he is, yet I like to keep him simplified as well.

Soaps.com: How does Adam feel about the dynamic between him and his father?

Michael: I think that as much as Adam is disgusted by his father, he also reveres him. Add my disclaimer here so that what I'm about to say isn't taken as the way that I, Michael Muhney, see my character, but rather the way Adam sees himself. I believe that Adam sees Victor as a hub with endless spokes sticking out, a front wheel that's spinning on the front of a bicycle. Victor is at the center of all this and he's the catalyst. I think that Adam, because of his birth name, and because of his DNA, feels like he's part of the same bicycle, but that he's the rear wheel with all these spokes sticking out from him. He's trying to find a way to put his wheel in front so that he can start to steer things in the direction that he wants.

Soaps.com: It's evident through the way that you peel away the layers of Adam that you think very meaningfully about your character and your role on "Y&R."

Michael: I'm incredibly enthusiastic about the character and about my work. If you don't do something you love, and you work in an art-form, then you don't need to be doing it. I absolutely love the Adam character and his dynamic with all the other residents of Genoa City.

Soaps.com: Recently, it's been evident that Adam is trying to right some wrongs in his life, especially where Sharon [Sharon Case] is concerned. Does Adam give full credit to Sharon for invoking this change, or are there other factors at play?

Michael: That's a really good question. I think that Sharon is largely responsible for where Adam has started to find some focus. But I would be remiss if I didn't also mention that it's sort of hand-in-hand with Hope. Yes, Sharon is responsible, but something has awakened within Adam that reminds him of Hope whenever Sharon is around. It makes him focused again, and wanting to be good and on track.

Soaps.com: What are Adam's true feelings for Sharon?

Michael: There's a quiet strength that Adam sees in Sharon, and he saw that same sort of strength in Hope. Adam finds himself wanting to be a better man because of Sharon. I'll be honest, I think that in real life, if you left most men to their vices and women weren't in the world, men would be even more corrupt than they are now! I think that Adam feels he has a lot more to lose now that he has Sharon.

Soaps.com: Is being with Sharon the main motivation of Adam right now?

Michael: Bill Bell, the genius behind this show, architected the Adam character with a master plan. He didn't arbitrarily name the baby that was born to Hope, "Victor Jr." It was part of a grand design for the future of the show, to have Victor 2.0. Though Sharon is in his life, Adam deep down has this urge to be like his father. Just like how Victor changed his name to "Victor Newman," Adam always needs to be the victor. The winner.

Have something to say regarding Michael Muhney or Adam Newman? Feel free to share your opinion in the comment section below! Join us on Twitter @soapoperafan, and Facebook. Come tweet and Facebook with us about "The Young and the Restless," all the other soap operas, "Glee," "Grey’s Anatomy" and "Vampire Diaries!" 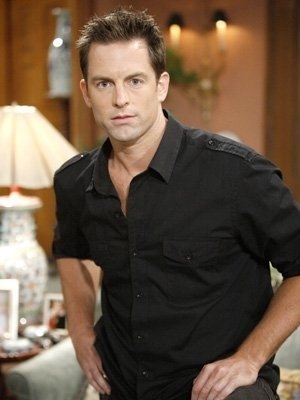 “It’s almost like petting a snake. You just don’t know with Adam.”

Soaps.com recently sat down to chat with “The Young and the Restless” star Michael Muhney, who plays the “black sheep” Adam Newman in Genoa City’s most infamous family. In Part I of this Soaps.com exclusive, Michael goes in-depth as he explores Adam’s feelings about his dastardly deeds, where Adam fits into the Newman family, the truth behind Adam’s feelings for Sharon, and much more!

Soaps.com: From forgery to baby-stealing, Adam’s developed quite the rap sheet since showing up in Genoa City. How does he feel about the dastardly deeds he’s committed in the past couple of years?

Michael: When I came in and took the reins of Adam, things were already underway that were sending him in a different path than we ultimately ended up taking him. I knew I was going to come in and have to dive into a sh*t storm with no proper gear or protection. My goal was to work my way through the tornado into the calm center. I was quickly able to get to the eye of the storm and got to have some control over what Adam was doing. The horrible missteps of sending Ashley [Eileen Davidson] down the stairs really tore into Adam’s psyche. He felt really guilty and it became a “two wrongs attempting to make a right” situation, trying to find a way to give Ashley a baby. Of course, that opened up Pandora’s Box from that point on.

Soaps.com: Take us through the evolution of Adam Newman, from then to now.

Michael: Adam was introduced to the show as Hope’s [Signy Coleman] son, a good guy from Kansas. To swing in the opposite direction and have Adam do some cruel and manipulative things, that took everyone by surprise. But after going from the extreme right to the extreme left, you kind of want to find that chewy center, and that’s where I’m most comfortable playing the character. To create that grey area. There’s no black and there’s no white. It’s always so much fun seeing fans’ reactions to things they think are going to happen. But consistently, there’s this universal truth that Adam is unpredictable.

Soaps.com: If someone would have told me two years ago that I’d end up rooting for Adam, I’d have called them a liar.

Michael: I’m so grateful for that kind of sentiment, which is what a lot of people have. I remember what it was like when the character was pitched to me two years ago. I felt like I was walking around with this dirty little secret. [chuckles] I always knew that there would be a contingent of haters, and people who would shut their minds out to Adam, but that there’d also be this large group who would grow with the character. I had never done a soap but this was the reason I agreed to do it. This particular character made me think that I could have a large impact and bring the audience somewhere they never saw themselves going. I really appreciate the compliments, and not to be cliche, but it’s like “the dream coming true.” I had a dream to make this happen, and for it to come to fruition, is most satisfying.

Soaps.com: Family wise, Adam’s often been viewed as the “black sheep” of the Newman clan. Is this an accurate statement, or does Adam have more positive feelings toward his family than meet the eye?

Michael: It’s interesting. Adam is reactive but also creates action. Is he going to be reactive to the way his family treats him or is he going to make the first move to bridge any gaps between them? I think it’s an organic thing that will happen over time.

Soaps.com: Do you see the character eventually becoming closer to his siblings or does he remain the outsider?

Michael: I have it sort of plotted in my head, that moment where Adam and his siblings have a moment of humanity where they go, “Why have we truly hated each other for as long as we have?” But that being said, I think his relationship with Victor [Eric Braeden] is more important than his relationships with his siblings.

The Young And The Restless Weekly Video Promo: Sharon's Fate

The Young And The Restless Video Promo: Adam Wants Sharon To Run