Soaps.com Chats With The Young And The Restless’ Emily O’Brien 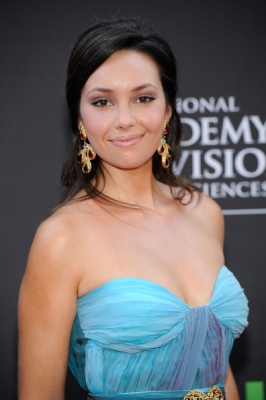 “There will be a major turn of events. Major.”

Soaps.com recently sat down to chat with The Young and the Restless star Emily O’Brien, who plays Genoa City’s ever-evolving British beauty, Jana Hawkes. Read on as Emily gets candid about Jana’s breakup with Kevin, the meaning of Ryder’s return, the truth about her real-life accent, and much more!

Soaps.com: It’s been almost five years since Jana Hawkes first showed up in Genoa City. Compare the Jana from 2006 with the Jana of 2011.

Emily: Ha! [laughs] She’s probably been 25 different people in the five years, I would say. She started off with this edgy, kind of goth-punk look to her, and she went through her karma stage. She went through the aneurysm and tumor stages where she didn’t know what the hell she was doing. Then she kind of toned everything down and became spiritual. It’s been incredibly exciting but now I can’t compare the character I began with to the character I play now.

Soaps.com: A lot of viewers have been disgusted with Jana and how crazy she now seems to be. As the actor who portrays Jana, take us through what’s currently going on inside Jana’s mind.

Emily: I think that all Jana understands is love, her genuine love for Kevin [Greg Rikaart]. Everything that she does comes from a place of love. It may cross the line and be obsessive at times, so that’s why people may think that she’s lost her marbles. To Jana, that’s just love, and what she’s doing to try to get Kevin back.

Soaps.com: What are your thoughts about the way Jana is handling the breakup with Kevin? Borderline stalker?

Emily: Look at where Jana’s come from. I can’t really judge her because she’s gone through so much. Everything that happened was not her fault. She had this aneurysm and ended up with Kevin’s brother, Ryder [Wilson Bethel]. I don’t think that was something she actually wanted. She just wanted to feel something. I don’t think she was herself at all, until she gets to the point where she realizes, “I’m starting to feel things again and I’ve made this terrible mistake.” Then she started turning back to normal, but on the other side now. Obsessive, and maybe you can call it “stalkerish,” but I think she just cares about Kevin and wants to know where he is all the time. She wants to make sure there’s still room for her in his life.

Soaps.com: Where does Jana stand on Ryder’s recent return to Genoa City?

Emily: Jana is very afraid and very bothered by Ryder’s return. She knows that if Kevin were to find out, it would ruin every little chance that she has to fix things with him again.

Soaps.com: Would Jana actually use Daisy Carter's [Yvonne Zima] innocent baby to try and get what she wants?

Emily: I think that she would, once again, because she thinks that she's doing it for a good cause. She's not only using this child to get back together with Kevin, but she's making sure this child is safe as well. By finding Daisy's child, it would take her out of foster care or off of the streets, or wherever else this kid might be. She feels she's doing two good deeds so that everyone can be happy.

Soaps.com: You've been nominated twice for a Daytime Emmy Award and you've been prenominated again this year. What does it mean to you to be recognized for your work on "Y&R" as Jana Hawkes?

Emily: It's really amazing, I was actually just thinking about it this morning. I feel like I have such an amazing time playing this role on the show, and it's so fun to discover Jana and see which directions she's going to go. It's almost so bizarre for me that I'm being awarded or recognized for just having such a great time. I don't go to work huffing and puffing every day. I'm excited and always looking forward to reading a new script to learn more about Jana. Even when I think a scene might go in one direction, it never does. It ends up completely different, and I thoroughly enjoy it! Someone recognizing my work, me just enjoying my work, is a gift.

Soaps.com: You were born in England but raised in California. Are a lot of fans surprised when they meet you to hear that you actually don't speak with a British accent?

Emily: Always. I was teased so much that I forced myself to get rid of my accent when I was 15-years-old. Now, I find that it's an enormous asset and I wish that I would have been smart enough to keep it. [laughs]

Soaps.com: How did the accent work for getting the job with "Y&R?" Was the show calling for someone with a British accent?

Emily: I was originally going out for a role called, "Jade." She was supposed to be a love interest but not a long-term thing at all. When I was reading for the role, the casting director gave me some notes and said, "I was just looking at your resume and it says you're from England. That'll be interesting. I want you to read for the producers with your natural British dialect." I did, and then they changed the name to "Jana" and here I am, five years later.

Soaps.com: Looking ahead, what can we expect from Jana in the near future?

Emily: Oh goodness, how can I put this in the best way? [pauses] There will be a major turn of events. Major.

Feel free to read Soaps.com's interview with Emily O'Brien regarding her Daytime Emmy nomination in 2009.

Update: After this interview, Soaps.com learned that Emily O'Brien has been let go from the soap. We'll update you after we speak with her regarding this shocking news.