Elizabeth Hendrickson talks to Soaps.com About Her New Role 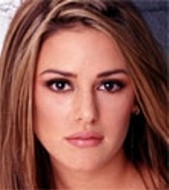 After playing both Frankie and Maggie Stone on All My Children for several years and then pursuing primetime for a couple more, Elizabeth Hendrickson has returned to soaps as Chloe on The Young and the Restless. I recently caught up with Genoa City’s newest arrival and discovered just how happy she is in her new daytime home.

“I’m really, really, really enjoying myself. I’m super excited,” she exclaimed about playing Jabot’s new fashion coordinator. She added, “I am so ecstatic you don’t even know. It is just such a delight.”

The role of Chloe came about when Barbara Bloom, Senior Vice President of Daytime Programs for CBS Entertainment, saw Elizabeth in a staged reading with Greg Rikaart (Kevin, Y&R). She was asked to come in and read with different actors to test their chemistry and eventually landed the part.

While not much is known about Chloe, the actress shared, “She takes her job very seriously. [She] is used to working with more professional models and is very hard on Lily regarding, you know, keeping up some sort of appearance if you will, regarding the fashion industry, which is weight. So [Chloe] starts to give [Lily] a little weight complex because she is constantly throwing in her face that either she doesn’t fit into things or they have to make things larger for her, etc., etc.”

Playing a character with a bit more edge, than say Maggie on AMC, is something Elizabeth relishes. “It’s really fun cause, yeah I get to play, not only this edgy, spicy kind of character, but she’s actually pretty funny too, so it’s nice to bring some humor into it as well,” she explained.

Taking on the new role also meant walking into a new situation, but while she was in new surroundings, Elizabeth was familiar with some of the cast. She and Vincent Irizarry (David, Y&R; ex-David, AMC) played cousins on AMC and even though the two have passed each other in scenes, they have yet to interact in them. It seems that’s good enough for now though, as she said, “It’s so comforting even just having him just a few feet away. It was really great to have him and Amelia (Heinle, Victoria, Y&R; ex-Mia, AMC) and I know Greg and Michael Graziadei (Daniel, Y&R). Michael Graziadei and I have mutual friends so it was nice to come and see some recognizable faces. It makes you feel a little bit comfortable.”

During her break between daytime stints, Elizabeth has kept busy working on a short film, appearing in commercials and guest starring on "Medium," "Cold Case," "CSI: Miami" and "Criminal Minds." Even though she enjoys working in primetime, she also finds it to be a bit stressful, explaining, "I loved it, but going on as a guest star is just hard because you know they have a new guest star in every episode and you really just sort of get thrown into it and sort of have to fend for yourself."

For now she couldn't be happier to be on The Young and the Restless, and would love for it to became a long term gig. "Everyone is so pleasant here and it's such a great, warm environment and it just feels really right. If they ask me to stay that would be a blessing," she stated.

As a recurring character her future is uncertain, but as for what Elizabeth would like to see happen for Chloe, it couldn't be more clear. "I'm obsessed with Judith (Chapman, Gloria)...I would love to be her little side kick. Like she could just teach me everything. I love her character and I think she's just one of the most innovate women I've ever seen on daytime. I think she's so great," she gushed, adding, "I just love that she has this crazy over the top character and she just commits to it and it just works so well. She just, like there's such a fine line with the role and she's just brilliant. Every time I see her, she's just, I just think she's a force to be reckoned with. I really enjoy her work."

While it remains to be seen if Hendrickson will get her wish of Gloria and Chloe teaming up, the 5'1 actress let me know that so far, "I am really happy about 2008."

Soaps.com would like to thank Elizabeth for taking the time to talk with us and hope to see Chloe in Genoa City for a long time to come.

The Young and the Restless To Mark...