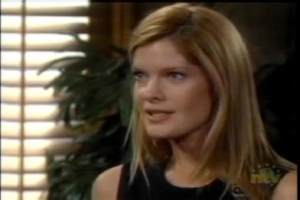 Taking time out from playing larger-than-life redhead Phyllis on The Young and the Restless, Michelle Stafford has recently completed work on a new film about the mob! Soaps.com can tell you that Director Scott McCullough is shopping the movie around on the festival circuit in order to find an appropriate theatrical distributor.

“3 Days Gone” is billed as an action/mystery/thriller about a man who wakes up after being buried alive for three days to find that he is being pursued by the mob and is a suspect in the murder of his best friend. The story follows the man’s quest to find out who set him up. Sounds good!

Michelle landed the feature role of Detective Holloway, playing opposite actor Christopher Backus, who portrays Lucas, the man at the center of the story. Michelle, a two time Emmy Award winner for her role on Y&R was a logical choice for lead actress, and Backus has appeared on such television shows as The O.C. and Will and Grace, as well as having a role in the 2007 film “Redline” which starred Nadia Bjorlin (Chloe, Days of Our Lives).

Michelle Stafford was born in Chicago, Illinois, but grew up in Los Angeles. She moved to Italy to pursue a modeling career, before returning to the United States and launching her acting career. After many television guest spots, Michelle’s career finally took off when she landed the role of Phyllis on The Young and the Restless, a role which was supposed to be brief, but the character, fueled by Michelle’s presence as an actress, became so popular, they decided not to let her go! Michelle has also had many television roles over the years, including Aaron Spelling’s short-lived effort “Pacific Palisades”. She also had the opportunity to work with Ashley Judd in the film “Double Jeopardy,” and had a lead role in the psychological thriller “Attraction,” which also featured actor Tom Everett Scott.

Soaps.com would like to offer Michelle congratulations on her latest endeavor. We are looking forward to “3 Days Gone” turning up in theaters! Meanwhile, we’ll happily continue to enjoy the exploits of her alter-ego Phyllis on The Young and the Restless!