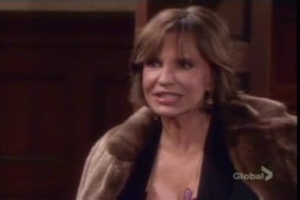 There’s been a lot of discussion lately on the Soaps.com Y&R message board about the recent dynamics between Jill Foster Abbott (Jess Walton) and Amber Moore (Adrienne Frantz). In a nutshell, Jill hasn’t been nice to Amber. Some posters agree that Jill is perfectly justified in her feelings about Amber, given that Amber tricked her son Cane into marriage. Other posters, however, feel that Jill is being too hard on Amber. Since Jill’s mother, Katherine, has taken Amber under her wing lately, Jill and Amber may be butting heads more often than usual in the weeks ahead. Soaps.com decided to take a look at the dynamic between the two characters and delve into their backgrounds a little to see what makes them tick!

It has come up in discussion that Jill may see something of her younger self in Amber, just as it was often speculated that Nikki (Melody Thomas Scott) saw herself in Sharon (Sharon Case) when she first started dating Nick. One would think that this would inspire sympathy, or at least empathy, but it appears not! Is it possible that Jill, who worked so hard to leave behind her working-class roots, shudders at the reminders brought to mind by Amber, a girl who she perceives is trying to do the same thing?

The characters both started out as innocents; working girls dreaming of better lives for themselves. Interestingly, it was Katherine who took Jill under her wing in the beginning on Y&R, hiring her as a paid companion and offering to pay for a college education. Jill was horrified to find herself in love with Katherine’s husband, Phillip Chancellor II, and tried to break it off. When she discovered she was pregnant, however, and that Kay had almost killed the man she loved in an alcohol-fueled car accident, Jill turned a corner in her mind, marrying Phillip on his deathbed, never to revisit her innocence again. What followed in Jill’s life for many years was a series of seemingly very calculated efforts at marrying into money. John and Jack Abbott, Victor Newman, even her own adopted mother’s fiancé, Stuart Brooks, were all targets of Jill’s measured plans to secure her future. Jill has since grown into a successful woman in her own right. Running a company is all in a day’s work for her, and she is free to pursue relationships for reasons of love now. She hasn’t had much luck, though, and seems bitter at times.

On sister soap, The Bold and the Beautiful, Amber started out with much the same origins as Jill and found herself in love with the wealthy, but younger, Rick Forrester. She married Rick for love and was accepted by the family until she hid a still-birth baby and got caught passing off her cousin’s child as Rick’s! Amber has gotten herself into many fixes, but they seem to always be attributable to the character being misguided as opposed to having sinister plans. Until greed got the better of her with Cane, Amber hadn’t particularly made a career for herself of pursuing rich men for the sole purpose of ensnaring their fortunes. In fact, she had, at one point, become a head designer at Forrester Creations on the merits of her own talent. That said, Amber continues to make poor choices, although that may change now that she has Katherine to guide her.

Of course, to see herself in Amber, Jill would have to step outside of her carefully constructed world of wealth, privilege and power, and admit that she came from the wrong side of the tracks. That may be difficult for her to do, so she may never be able to relate to someone like Amber. Conversely, perhaps she sees herself in Amber all too clearly, which is why she reacts the way she does to her, as though she is repulsed by that type of person (and therefore, repulsed by where she came from herself).

Well, we'd have to be students of Psych 101 to figure all of this out, but there is no denying how interesting it is to read through the histories of two characters of differing generations and note their similarities and differences. It was surprising to realize that Jill was actually a fair bit more cold and calculating than Amber!

Where The Young and the Restless will take the dynamics of the relationship between Jill and Amber is anyone's guess. But we predict a lot more fireworks as Amber grows closer to Kay! With wonderfully capable actresses Jess Walton and Adrienne Frantz in the roles, one thing is certain - it will be a thoroughly enjoyable display of acting!