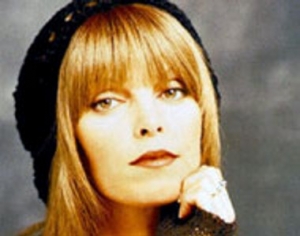 Soaps.com is excited to share that tomorrow, Thursday January 24th, the Y&R set will be abuzz as superstar singer Pat Benetar and her husband Neil Giraldo arrive to tape two episodes of the show! Pat, best known for her 80’s mega-song “Hit Me With Your Best Shot”, and Neil will perform their original duet “Every Time I Fall” on The Young and the Restless, presumably at Neil’s club, Indigo.

Benetar will also try her hand at acting, as part of her Y&R story line has her attempting to help Karen (Nia Peeples) overcome her stage fright so that she can take a stab at singing in boyfriend Neil’s (Kristoff St. John) establishment! Pat first acted in an ABC Afterschool Special called “Torn Between Two Fathers” in 1989.

Pat Benetar songs have been featured in many television shows and movies over the years. Most recently her tune “We Belong” was used in “Talledega Nights: The Ballad of Ricky Bobby”, and her hit “Love is a Battlefield” was heard in “13 Going On 30”. “Hit Me With Your Best Shot” was last used in the film “Bring It On Again” a movie about cheerleading from 2004.

We’re speculating that Karen will be able to croon Neil a romantic ballad on Valentine’s Day, as the two-day arc featuring Pat Benetar will air February 14th and 15th!