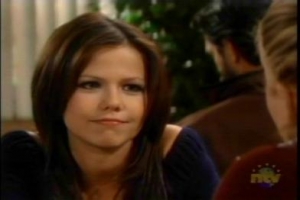 Looks like at least one Y&R actress made the long trek home for the holidays. Australian media is reporting that Tammin Sursok (Colleen Carlton) turned up at her parents North Shore home with her new boyfriend in tow!

Tammin, who moved to the United States in 2006 to pursue her acting career, enjoys great popularity in her home country of Australia. She is celebrated not only for her former role on the Australian television series “Home and Away”, but also as a recording artist who made her mark on Australian radio charts with the hit singles “Pointless Relationship” and “Whatever Will Be”.

Shortly after her move to Beverly Hills, Tammin booked a guest spot on “Rules of Engagement”, as well as a lead role in the indie film “Albino Farm” co-starring Chris Jericho (of wrestling fame) which is due for release later this year. Soaps.com readers know that her next gig was the re-cast role of Colleen Carlton on The Young and the Restless. Her prior soap experience has served her well, as she has easily filled the role of Brad Carlton’s daughter and Adrian’s love interest. Tammin also has a supporting film role to her name now, in the upcoming flick “Crossing Over”, which features big names such as Ray Liotta, Sean Penn and Ashley Judd!

The Aussies don’t seem to know who Tammin’s American boyfriend is, and she only hinted that he is involved in the acting industry, just not in front of the camera! She also noted that it was her favorite guy’s first trip Down Under, and they made it a point to spend time at the well-known Australian beaches and at least one nightclub! Reports say, however, that the majority of their trip was spent visiting with her relatives.

It was wonderful to note the pride expressed in Tammin in the Australian news report. She certainly seems to enjoy a great deal of support from her ‘mates’ at home. Genuine excitement appears to abound with regard to Tammin’s career in America in 2008! Soaps.com would like to join right in and wish her the best in the future, and say how glad we are that she is a part of the cast of The Young and the Restless.