Report Card: 2010 The Young and The Restless Year In Review 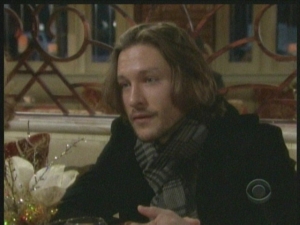 Skye's the limit! Could she return? (Soaps.com)

The grades are in!

As I write this, the annual Genoa City tradition of bringing tears to our eyes at Christmas is underway. Lauren warms to sudden-sister Jill long enough to invite her to stay with her husband and son on Christmas Eve – pass the Kleenex. Billy goes to great lengths to ensure Reed is brought home and into mother Victoria’s arms – there goes my mascara. Terminally ill Ronan arrives on the doorstep of long-lost mother Nina, and the look on her face as she opens the door – now even my dogs are crying. Not to mention a black and white teary-eyed Victor yelling at his computer (we’ve all had days like that).

In other words, a perfect time for a final, end-of-year The Young and the Restless Report Card:

Storyline: The Black Widow.
Y&R portrayed Ottawa as some backwoods trash town, leaving both Canada and its capital city insulted, but still, that’s where we met Sean Young’s Meggie, Murphy’s ex-daughter-in-law, the kook audiences couldn’t decide whether they loved or hated but who didn’t seem to care, anyway. Meggie nearly killed Murphy, tried to do in Victor for his billions, and turned Nikki back to the bottle. I loved Young’s weird whack take and the resulting chaos this unique character created: Grade: A

Storyline: Sister dearest.
We’re used to weird family twists when it comes to Jill, so it was easy to buy that her real daddy turned out to be Lauren’s daddy too. What wasn’t easy to buy was the sudden back-burnering of this development in order to bring Daisy back to torture Lauren further. That was a decision that has opened up a delicious can of worms, but Jill was suddenly pushed off the canvas, and, frankly, that should never be the case where Jess Walton is concerned. Grade: B (upgraded to B+ if the fun possibilities of this story are explored further and faster) next year.

Storyline: Sara snore.
Ooops, I mean Smythe. After a long teasing that felt like Sheila Carter was back in town, turns out that no, it was just some sister we never knew Sheila had, who looked just like Lauren, arriving in town complete with Devil’s Spawn, Daisy and Ryder – the kidlets of Terrible Tom and Satanic Sheila. The only catch? Neither Sara, Daisy or Ryder came off as remotely intimidating and the whole misguided mess was painful to watch, especially when there was another doppelganger storyline already underway on Y&R that was in a league of its own. Grade: F.

Storyline: Pushing Daisy.
So the completely non-terrifying Daisy is back in town and pregnant with a square pillow. The good news is that the competition is on to see who will become Genoa City’s Next Top Parent, and that’s fun viewing. Crazy Jana is in the lead, while former BFFs Kevin and a reluctant, ever-scowling Daniel get set to duke it out. Don’t discount Phyllis either; it’s great to see her being given fun storylines that don’t depend on a relationship that was beneath her to begin with. Grade: B+, but Daisy can go back to jail as soon as she pops.

Storyline: Take a chance.
This is how you clean up a story featuring a major character that isn’t working: send him out of town, let most of GC think he’s dead so that there’s plenty of room for secrets and fresh hot wounds, and then bring back a new and improved version at a later date and with a better story than that silly “drugs in the prison system” crap. Grade: F (while Chance was alive), B (“killing” him).

Storyline: Glo-A-Go-Go.
Isn’t Gloria the perfect character to run a naughty hot spot? She already has the gaudy hostess wardrobe, why not stick the word ‘worm’ next to her name and call it a day? This year, Y&R did just that, giving us a fun new set to enjoy, a place for Nikki to drink, and somewhere for a new Scooby Doo caper for Kevin to muddle through, a la Silver Chipmunk. My only worry is that Gloria is this close to becoming the new Gina, relegated to forever showing people to their tables, a new story ever 24 months if we’re lucky. She seems to be on to her husband’s bookkeeping shenanigans but has done nothing about it – not very Gloria at all. Or maybe she’s not noticed a thing and I’ve completely missed it because the story is just moving too slowly to notice. Grade: A- for Glowworm, C+ for Gloria and her stealing husband and sidekick son story that’s gone nowhere.

Storyline: Vail Bloom, can you hear me?
I like Eden Riegel, but I don’t like her as Heather, and watching the woman who was always wrong in her vendettas against Victor Newman, who in fact has never won a case at all, suddenly trying to run to be elected the District Attorney made my eyes burn. Plus she slept with Chance even though he was with Chloe, is now humping the guy who “killed” Chance, who happens to be Chance’s brother, and, in general, is a nag? This character is not likeable in the least and gets way too much screen time. Less is more in 2011 please. Grade: F

Storyline: The bitch is back.
Maura West is easily one of the most dynamic actors in Daytime and I love her as the latest Diane, the end. I like the slow burn happening now as we get reacquainted with the various relationships Diane has had with the denizens of Genoa City – I just hope she doesn’t get used to prop up a story with Nick, if only for the fact that Nick shagging his ex-step-mother is gross, despite West’s hotness. Grade: A-

Storyline: Double trouble.
I wasn’t going to let this Report Card go without giving kudos for the Patti/Emily storyline, which brought out the best in brother Paul (Doug Davidson was incredible) and gave us the incredible talents of Stacy Haiduk playing the look-a-likes. I wish they’d never written Emily off, if only to enjoy Haiduk’s mad skills some more, but the story ended so satisfyingly, was so edge-of-seat at its climax and was so ably played (especially when it drove down Absurd Street once or twice too often) by all involved that I’m giving this a Grade A+ and calling it Y&R’s Story Of The Year, a tie for first place with …

Storyline: Are you there, Vodka? It’s me, Nikki.
Grade A+ as well for giving Melody Thomas Scott having something to sink her teeth into – I hope Nikki’s booze battles continue into next year. So well played out and so well-written and bringing us the combo I like to call Dikki – Deacon of all people as Nik’s new knight in a story twist allowing Scott and Sean Kanan to shine.

Storyline: Long cold winters.
Okay, so we’ve had a new Malcolm for a while, Sophia is here, all curvaceous, now what? Nothing for the Winters family this year, Devon is constantly absent, Neil just sits and complains about his family’s business every couple of weeks and I don’t count Lily much anymore either; now that Tristan Rogers is in town it’s the Cane and Colin story; Mrs. Ashby seems to be a reason for Cane’s heroics rather than someone with a story of her own. Grade: D.

Storyline: Thunder from down under.
Tristan Rogers, whom I loved as Scorpio back in his General Hospital days, is everything as Colin that I felt Tucker was meant to be. I want to see him pitted against Victor Newman, I love the icy energy he gives off, he’s bringing out the best in Daniel Goddard as Cane, and I watch all his scenes hiding under my covers. May he never leave: Grade A.

Storyline: The only gay in the village.
Dear Y&R: Rafe is a homo. Explore it. Grade: D

Storyline: The Young & The Miscellany:
The Naked Heiress has lost her oomph since it went all legal (Grade: C), but it has introduced us to the sexy slime ball Vance Abrams (Grade: B+). From her very beginnings on Y&R I have thought that Skye’s the limit, and given that we know she’s alive and hiding out at The Newman Cabana, please let’s have her back and calling Adam on his crap some more – or even going on to a Story To Call Her Own next year; it’s deserved (Grade A-). The good news is: the reigning champs of the dullness category have left town: bub-bye JT and Mac! The bad news: Ashley and Tucker have replaced them, all newly engaged as if the dust has even settled from Ashley’s latest divorce and who cares? (Grade: C).

Last but not least, a Most Improved grade: Thank you to whoever decided to let everyone in GC call Sharon out for the whack job she is, thank you for letting her chose Adam over Nick, thank you for the return of the klepto, thank you for the fact she’s actually right about Adam not murdering Skye, thank you for making this character watchable, since she’s on almost every day. Grade: A

Overall Grade Y&R 2010: B+. Add in bonus marks for being daring even when that sometimes failed: A.

Shaun Proulx is the host of television’s "The Shaun Proulx Show," and a confirmed Y&R addict with no desire for re-hab. Join him on Facebook and Twitter and read his blog HIMBO! regularly, where he ‘Deconstructs Genoa City’.