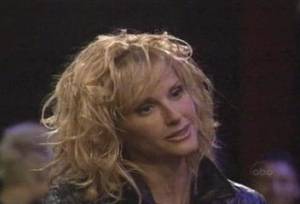 Soaps.com can tell it’s readers that according to insiders, and at least one soap publication, the role of Heather’s mother and Paul’s ex, April Stevens, has been re-cast! How will this affect the dynamic between the estranged father and daughter? There is no answer to that question yet. Many Soaps.com readers, of course, will be hoping that April can help ease relations between Heather and Paul who are struggling to overcome the pain of their long-term separation.

The role of April, previously played by Cynthia Elibacher, will reportedly be filled by well-known daytime actress, Rebecca Staab (Elizabeth, Port Charles, ex-Jessie, GL). Staab has told media that Y&R approached her with an offer – no audition necessary!

After Port Charles ended, Rebecca has done television appearances on programs such as “Nip/Tuck” and “CSI”. Staab has also been involved in film projects, including Danielle Steele’s “Safe Harbor” and the recently completed, “All Ages Night”.

Although April’s appearance is only slated to be one or two episodes at this point, perhaps The Young and the Restless will elect to keep the character around longer to enhance the Paul/Maggie storyline and to build support for the character of Heather! One never knows! It is important to note that Y&R representatives are not commenting on this casting matter at this time.