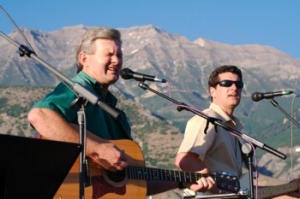 Soaps.com readers are always asking about the great songs featured on The Young and the Restless, so this time, when we were lucky enough to get a heads-up on a song to be used this week, we thought we’d pass on the information!

On Friday morning, December 21st, Utah band, “Joshua Tree” will have their Christmas song, “Everything I Need” played for about a minute and a half on Y&R. The song is Christian-themed and was co-written by Deana Hinton. The song tells the story of a child who sets out to see Santa, but winds up visiting a manger scene. The song’s publisher, Justin Wilde, told media he was surprised that a daytime drama would choose to utilize a song with a religious theme.

Joshua Tree band members, Jeff Hinton and Quint Randle, said they don’t know whether The Young and the Restless will opt to have “Everything I Need” playing in the background of a scene, or use it so that the lyrics can be heard, but either way – they’re excited! They feel the exposure on a national level is all good!

So, Soaps.com readers and Y&R fans, tune in and pay close attention Friday morning and see if you can pick out “Everything I Need” by Utah’s Joshua Tree! Be sure to post on the Soaps.com message boards if you hear it and let us know what you think! If interested, you can find out more about this
band at Joshua Creek Music!