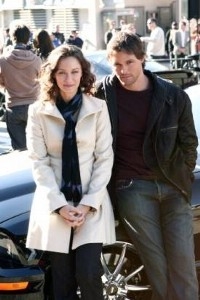 Soaps.com is excited to pass on the news that The Young and the Restless’s Deanna Russo (Logan) has landed the female lead role in the upcoming television movie, ‘Rider’! She joins Justin Bruening (ex-Jamie, All My Children) who will star as Michael Tracer, son of Michael Knight, the original Knight Rider, played in the television series by David Hasslehoff (ex-Snapper, Y&R).

Amazingly, Deanna may also get to play opposite David Hasslehoff as well, since he is currently in negotiations to reprise his role for the film!

Deanna will play Sarah, daughter of the man who created the talking car, K.I.T.T (Knight Industries Three Thousand), and the lost love and childhood friend of Bruening’s character, Michael Tracer. Bitter about his split with Sarah, Michael (Mike) is languishing in Las Vegas when Sarah reappears with an offer to pay off his gambling debts in return for help finding her estranged father, who has gone missing.

The busy actress has also just finished making the movie “Ghost Voyage” with Antonio Sabato Jr. (ex-Dante, The Bold and the Beautiful), about a group of people trying to escape from a haunted ship set on a course to hell!

Where Are They Now? Penn Badgley