Judith Chapman Directs & Performs in ‘Trial of the Catonsville 9’ 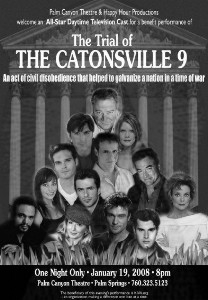 The Young and the Restless actress, Judith Chapman (Gloria) is bringing together a very special cast of daytime performers for the one-night-only performance of the play, ‘The Trial of the Catonsville 9’ at the Palm Canyon Theatre in Palm Springs, California. Judith, along with Happy Hour Productions will present the play on January 19th, 2008, with tickets going for $60 apiece, which includes a wine-catered reception with the cast immediately following the show!

The story behind the production is based on a real-life event in 1968, in which a group of priests, nuns, and lay persons entered a Federal Building in Catonsville, Maryland and burned selective service cards in protest of America’s involvement in Vietnam. All were brought to trial. Chapman states that the play is “not so much about politics as about human decency.”

On her personal website, Judith describes how she was contacted by Maria, one of the actual members of the group depicted in the play. She says she spoke to her for over an hour on the telephone and was absolutely moved by her interest in the production. Maria (who will be played by Emily O’Brien) will be in attendance on the night of the performance, as will other members of her family! To read more, go to Judith’s Website.

Soaps.com offers congratulations and good luck to Judith and all of the actors and actresses involved as they work to bring this touching drama to life. For tickets and additional information, Soaps.com readers can call the Box Office of the Palm Canyon Theatre at 760-323-5123.