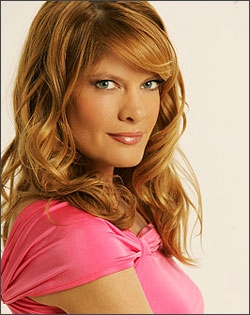 Recently, Soaps.com had the pleasure of talking to The Young and the Restless actress Michelle Stafford!

Taking over the role of Phyllis in 1994, Michelle has been a fan favorite among many, so I had to ask how it feels to be one of the most popular characters on the show?

Michelle, “I didn’t realize I was one of the most popular characters.” (Note from Christine, Editor-in-Chief: She has no idea, guys! We love Phyllis!)

No matter what, every character has their ups and downs, and Phyllis is no exception! Having done her fair share of misdeeds over the years, but loving her in spite of this, I asked Michelle, “Do you prefer playing the bad girl vs the angel?”
“No… I like doing both actually,” Michelle admits.
After making the show a daily part of our lives, we know it’s sometimes hard to distinguish the character from the actors who play them. We’ve even heard from some actors that the odd fan has actually stopped them on the street to confront them for their character’s actions! So I asked Michelle if this is something she’s experienced due to some of Phyllis’s actions…Happily, Michelle answers, “No, the fans are always nice to me.”

Although some actors have different thoughts on my next question, and claim it’s one of the most difficult tasks, Michelle was very honest in her answer when I asked what it’s like to act in a love scene? We hear it’s one of the most difficult tasks. “Oh my gosh,” Michelle boosts. “They’re liars. It’s not difficult at all. People are lying because they don’t want their wife or husband or girlfriend or boyfriend to get pissed off with them saying they’re having a good time. But let me be honest with you we’re having a fun time.” Which brings me to my next question, “What’s the main difference between doing love scenes with Nick (Joshua Morrow) compared to Jack (Peter Bergman)?” “Well,” Michelle explains. “They’re just different people all together. So by virtue of them being different guys it is in fact different.”

Michelle did such a wonderful job playing a dual role and jumping into Shelia’s shoes, a character that has become one of daytime’s biggest villains. Knowing the hours must have been grueling, I was curious to know how Michelle prepared for this…
“The hours were very long and tough. Lots of prep. It would be boring to get into. But there you go. Lots of prep. Totally different character.”

Having seen, and enjoyed, Michelle’s Lifetime Movie “Like Mother, Like Daughter,” I wanted to get Michelle’s take on how primetime is different from daytime? She tells us, “It takes longer to shoot scenes in primetime and that’s really the only difference, to be honest with you.”

Although the actors aren’t supposed to talk about storylines, I had to give it a shot and ask if Michelle could give us any hints as to what’s to come for Phyllis in the near future… “I don’t even know. I have no idea,” Michelle admitted. “Eventually she’ll get out of prison.”

Fans sometimes wonder if the actors receive the gifts they send them and what their response is to the gestures, so I asked Michelle how she feels regarding fan gifts – or if she’s ever received a ‘scary’ gift… Michelle says, “They’re all cool. Just knowing that someone wants to give me a gift makes me feel good. There hasn’t been anything scary. Everyone has been very nice.”

As our interview comes to a close, Michelle was generous enough to answer some of the questions of Soaps.com’s loyal readers!

Pussycat asks: How do you prepare for your story lines when they are so intense day after day? Your fans love you and look forward each day to see what Phyllis is going to do.

Michelle: “That’s very sweet. I just prepare like anyone else would for a job. I just do it.”

Michelle: “Hockey: LA Kings. I’m from LA. You gotta support the home team. Football: I don’t have one because we don’t have a football team in LA.”

Truetalltales asks: You have such a slender body. What is your diet and fitness routine?

Michelle: “My fitness routine is: I work out a lot. I’m extremely active. I walk very fast – I almost run. I’m just a very active person – I think that’s why I keep my weight down.”

Kimyla asks: What would you like to see your character develop into in the future?

Michelle: “I really don’t have any answer for that question. I just leave it up to the writers.”

Gommie asks: I’d like to know if you ever disagree with the storylines you are given – Do you have any input. Can you voice your opinions – and if so are they taken into consideration or is the writing set in stone and followed to the letter sort of thing…

Michelle: “I don’t really disagree with storylines. It’s my job to make it work. It’s my job – it’s what I do for a living.”

Krist07 asks: If you could trade characters for one day, who would you want to portray and why?

Soaps.com wants to thank Michelle for taking the time out of her busy schedule to talk with us today! To learn more about Michelle and her career, please visit her official website at Michelle Stafford.com!

Explosion! Out Of The Ashes!!!