Laura Saltman Returns To The Young And The Restless 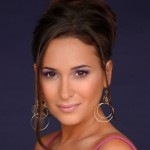 Laura Saltman will be appearing in Genoa City once again, this time she will portray a gossip reporter named Mona Madden, who dishes dirt on Nick (Josh Morrow) and Avery’s (Jessica Collins) fling. Watch for her on Thursday November 15.

Laura Saltman from “Access Hollywood” has already appeared on The Young and the Restless back in August of last year. At that time she played a character named Sonia Wells who was a reporter for a gossip rag. This time, Laura will appear as an anchorwoman by the name of Lynda Culpepper. Laura will appear with Jess Walton (Jill Fenmore) and Tracey Bregman (Lauren Fenmore) in scenes taking place beside Neil Fenmore’s gravesite! Her airdate is August 2. Visit our Y&R Comings and Goings for more casting news.