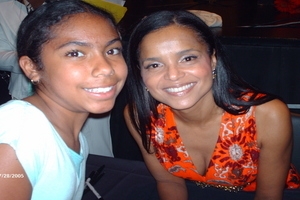 Victoria autographing a novel for Kathy!

Recently I had the pleasure of speaking with a couple of our Soaps.com readers who actually met ex-Young and the Restless actress Victoria Rowell (Dru Winters) on one of her book tour stops! Now sit back, as these two fans describe their up close and personal real-life experiences and how it felt to meet one of daytime’s number one divas!

Kathy K. (aka CantgetenoughYandR), who was kind enough to send along some pictures of Victoria (within the article), started out by describing Victoria’s appearance when arriving at the Madame Walker Theater…

“Victoria was so sweet and kind and just plain down to earth. She is much smaller and delicate in person than she looks on TV and very soft-spoken. She told the audience that she chose to come to the Madame Walker Theater due to its rich African-American History. While Victoria Rowell was in Indy previously she stumbled across this theatre and was told of its historical significance. She felt as though it was fate and said that she became intrigued by Madame Walker and started doing more research. She said she is currently writing a screenplay and hopes to turn it into a movie. This information was shared with us in Indianapolis since the Madame Walker theatre is where she appeared. I thought this was very interesting too.”

Now fans, here’s the really fun part! Kathy was fortunate enough to not only meet Victoria but to sit in on a ‘Questions and Answers’ session, to which she has shared with Soaps.com! Take it away, Kathy!

“When asked if Dru will return to Y&R, Victoria smiled and said that they only found Dru’s jacket and since they did not find her hat (and she added we all know that Dru would not be caught “dead” without her hat) that there is a possibility that we may see her in the future but she did not commit one way or another.”

“When asked if she held any resentment toward her biological mother for the way she was raised, Victoria said that she held no resentment and in fact that it took a great deal of love from her mother to allow her to be raised in an environment that was healthy for her to learn and develop into who she is today.”

“When asked who was a better kisser, Malcolm or Neal, she replied that they both were great.”

“When asked if she based the character of Dru after anyone in particular, she replied that when she was in foster care, there was another foster sister (not her real life sister) who was very street wise and tough but who had a soft side to her. When the writers told her about the character as being a street wise urchin, she knew that she wanted Dru to emulate the personality of her foster sister (who also is mentioned in her book).

On a final note to Kathy’s once in a lifetime experience, she told Amy and Soaps.com, “Victoria shared so many memories about her childhood and her life and made sure that anyone who wanted to talk to her or have a picture with her was able to do so. I found that she is such a gracious woman and I could listen to her read excerpts from her book all evening.”

While Kathy was able to touch base on many different aspects of her experience, I also heard from a fan who couldn’t have been happier with Victoria’s book and wanted to pass along her praise to every Victoria fan out there… Bettye J., another great Soaps.com reader, told us…

“On May 11,2007, the day after Victoria's birthday, I met her in Savannah Georgia and got a chance to celebrate her birthday. When she glided into Barnes and Noble, the first thing you notice is how tall she is. Then her flawless skin without a drop of makeup, but looking like a million dollars. Then you notice her smile, that lit up the entire room. Her voice was very distinguished and she carried herself with dignity. She was dressed in a well-cut designer suit and blouse with heels and a trademark brim-hat to top it off. She is a very beautiful person who was warm and friendly to everyone she met at her book signing at Barnes and Noble. I had already read the book, which I personally rated 5 stars. It should be in every school across the nation because it is a very educated and true-life story about the strong women in her life who gave her a foundation that has kept her well rounded. Victoria is a very gifted author who made every page come alive and gave us all some very important history information and made you cry and laugh out loud all at the same time. This is a book that can be read by everyone because it is also a learning tool. "The Women Who Raised Me", is the kind of book that I bought for family members to share and I enjoy reading my autographed copy over and over again.

Soaps.com wants to thank Kathy K. and Bettye J. for taking the time out to contact us and share their experiences from a fan’s point of view! Everyone should be so lucky to meet such a wonderful person as Victoria Rowell!