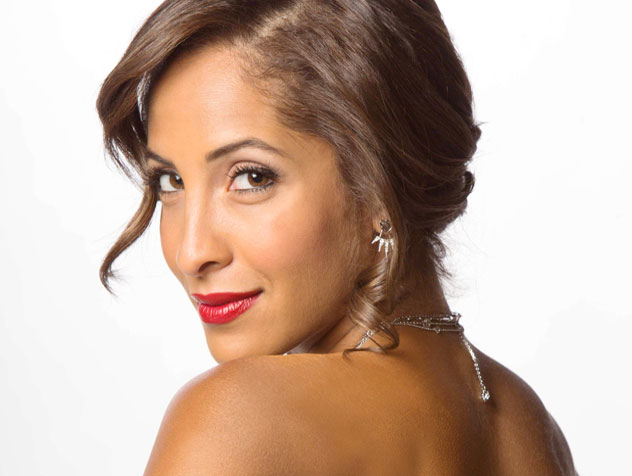 * Resides with husband Cane.
* Lost her virginity to Kevin Fisher.
* Caught an STD after sleeping with Kevin.
* Was drugged and attacked at the Rec Center by Alex.
* Ran away to California with Daniel.
* Was arrested for aiding and abetting a fugitive: Daniel Romalotti.
* Became engaged to Cane Ashby.
* Won the Fresh Face of Jabot modeling contest.
* Was devastated to learn that Cane was possibly the father of Chloe's baby.
* Broke off engagement with Cane and encouraged him to do right by Chloe and his child.
* Dated Billy Abbott
* Reconciled with, and married Cane.
* Fought ovarian cancer.
* Raising twins.
* Pushed Tyler Michaelson away after they shared a kiss.
* Began working for brother Devon after he bought the Genoa City Athletic Club.
* Worked hard to break up Neil and Hilary.

Who's played Lily Winters Ashby over the years?

While spending most of her childhood in Paris, Lily returned to Genoa City in 1996 with her mother Drucilla who had a successful career as a model. Shortly after, her parents reconciled, but it was short lived. Lily and her mother then returned back to Paris until 2002.

Arriving home, now a teenager, Lily watched as her father Neil battled alcoholism. In an attempt to help in Neil's recovery, Lily and Dru moved back in and in time became a family again. At first, Lily detested her mother for taking her away from the excitement of Paris, but soon found a new friend in Colleen Carlton and Sierra Hoffman.

After meeting Kevin Fisher on the internet, Lily found herself in a predicament when her much older boyfriend wanted more from her than she was ready for. However, Lily gave into Kevin and the two had sex. It wasn't long before Lily realized that Kevin wasn't who she thought he was. After Lily broke up with him, Kevin went crazy on her friends and the people who loved her and also left Lily with a sexually transmitted disease.

Lily had a hard time trusting boys after that. While volunteering at the Rec Center, a boy named Alex drugged her orange juice and tried to rape her in the elevator! To everyone's surprise, Kevin Fisher saved her and regained some respect within the community. It would come out later that Kevin and Lily's current husband Daniel actually set the whole thing up to make Kevin look like a hero! In time, Lily forgave Daniel.

During her time at the Rec Center, Lily met Devon Hamilton, a boy who had grown up in the foster system, but found that he resented people of her stature. After finding out that Devon was losing yet another foster parent, Lily convinced her mother to allow him the stay with them. Although Devon gave the Winters a hard time at first, with Lily's help, he was able to turn his life around and is now part of their family.

When Lily's Uncle Malcolm returned to GC after everyone thought he was dead, they became really close. Malcolm took on a new job as Jabot's photographer and made Lily the lead model for the teen line. Lily soon fell for Daniel Romalotti and the two became madly in love! However, with young love came heartache.

As their relationship hit the rocks, Daniel got drunk at a party and passed out. Without his knowing, Cassie Newman, an underage driver, drove his car home and got in an accident that ultimately caused her death. On the run from the law, Lily traveled across the country with Daniel. In the end, they were caught and Lily was slapped with probation and forced to move to New Hampshire to attend boarding school. Although it was only through the internet, Lily and Daniel's relationship remained intact.

When Lily came home for a visit on Devon's birthday, she and Daniel acted as though they were broken up. After her parents found out, Lily was at risk of them telling the police to teach her a lesson, so she and Daniel ran off to Vegas and eloped! Upon their return, the young couple moved into the Abbott guesthouse and got jobs to make a go of it.

Lily's life really changed after she overheard her and Daniel's mother arguing about Dru keeping the secret that Lily was really Malcolm's biological daughter! Totally distraught, Lily and Dru's relationship was damaged for a very long time. When Neil found out, the Winters family almost fell apart after he turned to Carmen Mesta for comfort.

Lily bounced back, and fell in love again and became engaged to Cane Ashby. She won the Fresh Face of Jabot contest and started modeling just like her mother before her. But when Cane was fingered as the father of Chloe Mitchell's unborn child, Lily broke her engagement and quit her job at Jabot, where Cane is CEO. She then dated Billy Abbott. She and Cane reconciled and finally married, but briefly separated when it came out that he isn't really a Chancellor. Lily found out she had ovarian cancer and wanted her husband. When she learned she would have to have a hysterectomy, Lily and Cane decided to take Mac up on her offer up surrogacy. Lily's eggs were harvested and Mac became pregnant. The twins were born prematurely, and the stem cells from the cord blood were used to help build up Lily's strength so she could defeat the cancer once and for all.

Lily and Cane were raising the twins at home when the specter of Cane's past with the cattle rustlers in Australia came back to haunt them as someone was watching the house, a dangerous threat to the family.

At a party Lily and Cane threw at the Athletic Club to celebrate the twins’ turning 2, a mysterious gift of an antique doll and car was left behind. They were old toys belonging to Cane and his dead sister Samantha, but no one knew how they got there. Lily told Ronan the family was being stalked. Meanwhile, Lily took over as head of the Jabot marketing team. New hire Tyler Michaelson was drawn to Lily and flirted with her often. This made Cane jealous and he fired Tyler when he could. Lily convinced Cane to give Tyler another chance but eventually agreed to cut ties with him herself for the good of her marriage. When Tyler then drunkenly kissed Lily one night, she kissed him back before pushing him away. After Lily masterminded the marketing campaign for Chelsea Lawson’s new line for Jabot fashion she was paired with Tyler again on the project. He couldn’t stop thinking about Lily and tried to quit, but she took herself off the project instead and Devon took her place.

Cane sought Lily’s approval when hiring a new assistant and she signed off on his top choice, Hilary Curtis. But Lily soon realized Hilary was after her husband and eventually convinced dubious Cane that she was right. When Lily discovered Hilary was actually the daughter of someone from her father’s past seeking revenge, she worked with Cane to set Hilary up and exposed her as the person leaking info about the family to GC Buzz.
At the same time Lily was celebrating being cancer-free for five years, she took a job as manager of the Genoa City Athletic Club – along with Cane as business manager - once Devon bought it. Her first big project was organizing the Delia Project's fundraiser, and she butted heads with Hilary on the planning. At the benefit Lily saw a strange man trying to leave with the antique doll which was up for auction and grabbed for it. The doll broke and diamonds went everywhere, and the man named Richard Womack held everyone hostage. He made Lily scoop up the diamonds, then made a deal to let the hostages go for an escape in Jack’s private jet. He let everyone go except Lily, but she fought back and the gun went off, shooting Cane. Colin held Womack while Lily and Cane escaped. Not knowing Colin played a role in the situation, Lily thanked him and told him they were even for when he kidnapped the twins. But, she warned Colin she would still never trust him.

Lily arranged for Chelsea’s new line for Jabot to premier at the athletic club, but had a serious problem with Hilary and Neil going to LA to meet with Forrester Creations for a partnership. Hilary and Lily fought throughout the planning of the event. Lily was incensed when she learned her father and Hilary were an item and suggested Devon pay off the woman with a million dollars to get rid of her. She then thought it would work better if Devon seduced Hilary to get her away from Neil, but he refused. Lily tried everything to break up Hilary and Neil but nothing worked and the pair were married. Lily did not go to the wedding and continued to browbeat Hilary, even after Neil finally yelled at her to grow up and get over it. Cane even told Lily to drop it.

After Cane and Hilary found Neil unconscious and electrocuted Lily blamed Hilary since the old house Neil was hurt in was a surprise for her. Neil woke up but was blind and was warned it could be permanent. At first Neil pushed Lily away but then let her in, and Lily eventually forgave Hilary when she saw how much Hilary cared for Neil and stood by him after the accident. She began to grow close to Hilary, even going on a spa trip with her, not knowing Hilary was cheating on Neil with Devon.

Charlie and Matilda (with Cane Ashby)