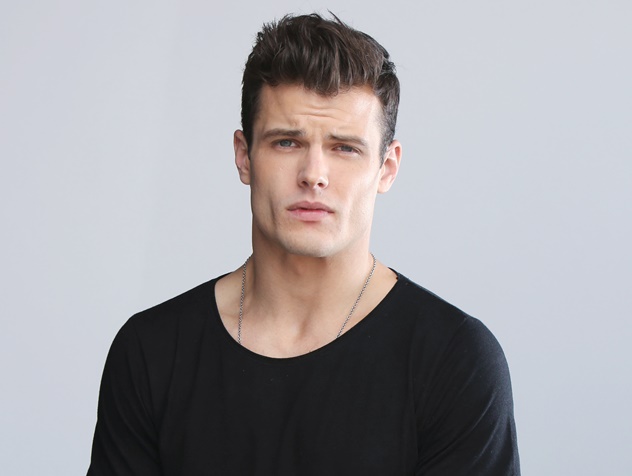 * Was originally thought to be Victor's son.
* Hated Nikki Newman for killing his mother.
* Left as a youngster to go to boarding school in Lake Placid following his mother's death.
* Returned to Genoa City after 15 years away.

Who's played Kyle Abbott over the years?

Kyle returned to Genoa City as a twenty-something, still harboring a grudge against Nikki Newman for killing Diane, even though it was ruled as self-defense. Kyle shunned his father for having a relationship with Nikki, and moved in with Victor at the ranch. Kyle began dating Eden Baldwin. After Victor married Sharon and then went missing, Kyle elected to move back in with Jack after a falling out with Sharon.

Kyle's romantic life with Eden fizzled after he began flirting with Phyllis in front of her. Kyle wound up working at Newman after Jack took it over, but ended up fired after confronting Jack about his pill addiction. Kyle was rehired at Jabot after Jack got clean, and Summer Newman began pursuing him romantically. Nick got wind of Summer wanting to have her first sexual experience with Kyle and it was revealed that Summer's paternity test from back in the day was inconclusive. When things began heating up with Summer and Kyle, Nick arranged for a paternity test to confirm whether he or Jack was Summer's father, and Phyllis ran interference, kissing Kyle and causing him to dump Summer. Kyle later regretted hurting Summer and asked for another chance, but by this time the results of the paternity test had been revealed to Summer and she was forced to tell Kyle that since Jack was her biological father they were siblings. Kyle had a hard time dealing with this news and found himself caught up in work. He became involved in Jack and Jill's plot against Victor, and managed to get himself hired at Newman Enterprises so he could be a mole. This was despite Jack asking him not to as he didn't want to use his son the way Victor used his children. Victor pitted Kyle against Noah at the company, where he remained until Noah caught him photographing files in Victor's office. Not long afterward, Kyle left Genoa City for New York on Jabot business.

After several years working as a Jabot executive in New York, and casting a surprising vote against Jack when Ashley challenged him to become CEO of Jabot, Kyle returned to Genoa City single and still with an axe to grind against his father. After Victor was left for dead in the ranch following a fight with JT, Jack showed up and discovered a hard drive on which he found emails proving Kyle was in cahoots with Victor. Kyle stepped in as interim CEO at Jabot when Jack was arrested for the attack on Victor, who was in a coma. Kyle became suspicious of Ashley and Abby hiding something from him, and got his hands on the memory card containing footage of Dina claiming that John Abbott was not Jack's father. By now, Jack was out of jail and Victor was out of the coma. Kyle was bitter after being ousted from the executive suite once again and took the damaging information to Victor. When a screening was held for the documentary on Dina's life, the shocking reveal about Jack's paternity had been edited in, and Kyle blamed Victor. With Jack nor Kyle being a blood Abbott, Billy took over as CEO of Jabot, and Kyle chose to continue to work there alongside his uncle, though Jack left. Kyle engineered a 'wardrobe malfunction' that had him appear in his birthday suit on live TV, and it helped boost sales of Billy's new sunscreen. Kyle softened toward Jack, and helped him find evidence as to the identity of his father as they were led to a safety deposit box containing a photo of Phillip Chancellor. In the meantime, his ex, Summer, returned, and Kyle wanted nothing to do with her, though there was clearly still an attraction.