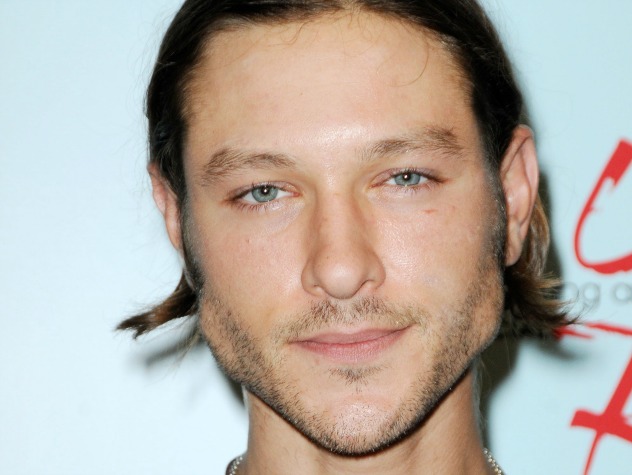 * Grew up in a Swiss Boarding School.
* Developed a relationship with his estranged mother Phyllis in his teenage years.
* Found out that Danny wasn't his biological father.
* He and Kevin Fisher hired a dirtbag, Alex, to attack Lily Winters so Kevin could save her and look like a hero.
* Was expelled from Walnut Grove Academy for his involvement in the death of Cassie Newman.
* Was on the run from the law with Lily Winters.
* Was married to Lily Winters. They divorced to to his pornography addiction.
* Survived a car accident during the "Ice Storm" on the way to club Indigo.
* Fell in love with Amber Moore and moved in with her.
* Took a job at Restless Style, and went on tour with father Danny for brief time.
* Came home from tour to discover Amber had cheated, so broke up with her.
* Resided with Kevin and Jana.
* Dated Colleen Carlton.
* Was framed for murder by Deacon Sharpe.
* Divorced from Amber Moore.
* Dated Abby Carlton Newman
* Was drugged by Daisy Callahan and fathered a child.

Who's played Daniel Romalotti over the years?

In 1994, after Daniel's mother Phyllis was deemed an unfit mother, he was whisked off by his father Danny to a Swiss boarding school to where he was forced to grow up - and fast.

In 2003, Daniel returned to Genoa City and briefly lived with Christine Blair. Although it took a lot of mending, Daniel and his mother were able to put the past behind them and managed to become close, even after he found out that Danny Romalotti wasn't his biological father.

Daniel became friends with Colleen, Lily and Sierra and went on to volunteer at the new Rec Center where he fell hard for Mackenzie Browning. The two became close until Mac found out that Daniel was younger than he had let on, leaving Mac to break off their budding romance.

Daniel befriended Kevin Fisher and plotted with a boy named Alex to help Kevin once again look good in the eyes of Lily Winters. Alex drugged her orange juice and tried to rape her in the elevator! To everyone's surprise, Kevin Fisher saved her and regained some respect within the community. It would come out later that Daniel actually set the whole thing up to make Kevin look like a hero! Much later, Lily found out but, in time, forgave Daniel.

Daniel and Lily soon became close and fell madly in love! However, with young love came heartache. After finding their young love on the rocks, Daniel got drunk at a party and passed out. Without his knowing, Cassie Newman, an underage driver, drove his car home and got in an accident that ultimately caused her death. On the run from the law, and with no memory of the accident, Lily traveled across the country with Daniel. In the end, they were caught and Lily was slapped with probation and forced to move to New Hampshire to attend boarding school while Daniel was left to face vehicular manslaughter charges. The truth soon came out when Nick Newman came forward with evidence to prove that Daniel hadn't been driving the car the night his daughter was killed.

Although it was only through the internet, against their parents' wishes, Lily and Daniel's relationship remained intact. When Lily came home for a visit, she and Daniel acted as though they were broken up. After her parents found out, Lily was at risk of them telling the police to teach her a lesson, so she and Daniel ran off to Vegas and eloped! Upon their return, the young couple moved into the Abbott guesthouse and got jobs to make a go of it. As a favor to Phyllis, Victor Newman gave Daniel a job in the Newman Enterprises mailroom.

Months later, Daniel walked in on his mother and Nick Newman having an affair on their couch! Once again, Phyllis and Daniel's relationship was put to the test, but they managed to get through it. With his mother and Nick now married, Daniel welcomed a new baby sister into his family in 2006.

Daniel and Amber couldn't stay apart for long, however, and they reconciled. When Amber got in over her head helping Kevin, Daniel searched for her. Another threat to their relationship came when Amber's old flame, Deacon Sharpe, showed up in town and framed Daniel for murder. Daniel married Amber in a romantic rooftop ceremony performed by Katherine Chancellor!

After Amber found Daniel in bed with Daisy (she drugged him) and Amber's 'son' Eric turned up in town, she left to go back to L.A. and divorced Daniel. Single Daniel fooled around with Abby Newman, and surprisingly for both of them, it turned more serious. Daniel was briefly dumped by Abby when Daisy turned up in Genoa City pregnant with his baby, but they reconciled. Daniel helped deliver the baby when he caught up with Daisy, who was running from the law. She knocked him out as he held his daughter and he was unconscious for days. He awoke to realize his daughter was in the arms of Billy and Victoria, who had somehow acquired her through a quickie adoption. Daniel tried to help Billy and Victoria retain custody, but Phyllis brought Daisy back and won in court against them. Daniel and Abby split for good.

Daniel supported Lily throughout the time where Cane was believed dead and she thought she was seeing his ghost. Daniel and Lily made love after she knew Cane was alive, but they parted ways when she began to be drawn to Cane again. Daniel dated Eden when she came back to town, but things cooled when he provided a jilted Chloe with support and Eden witnessed them kissing.

After Avery got Daisy out of jail, Daniel decided to petition the court to get his parental rights to Lucy back in order to prevent her from being raised by Daisy. Ricky briefly kidnapped Lucy while she was in Daniel's care and he lost his bid for custody. Weeks later, Daniel ended up proposing to Daisy, marrying her, and moved her and Lucy into his apartment. He wanted to protect his daughter. After Daisy failed to get Phyllis help when she was miscarrying, Daniel became part of a plot to get rid of his wife. As it turned out, Daisy got too close to Ricky and inadvertently found out that he had murdered his ex-girlfriend. Soon after, she went missing.

Daniel became involved with Heather Stevens secretly, as she was part of the team prosecuting his mother for running down Paul and Cricket in her rental car years before. When the court drama was behind them, Daniel and Heather ended up moving to Chicago with Lucy where they now reside.

In August of 2016, Daniel returned home to Genoa City.