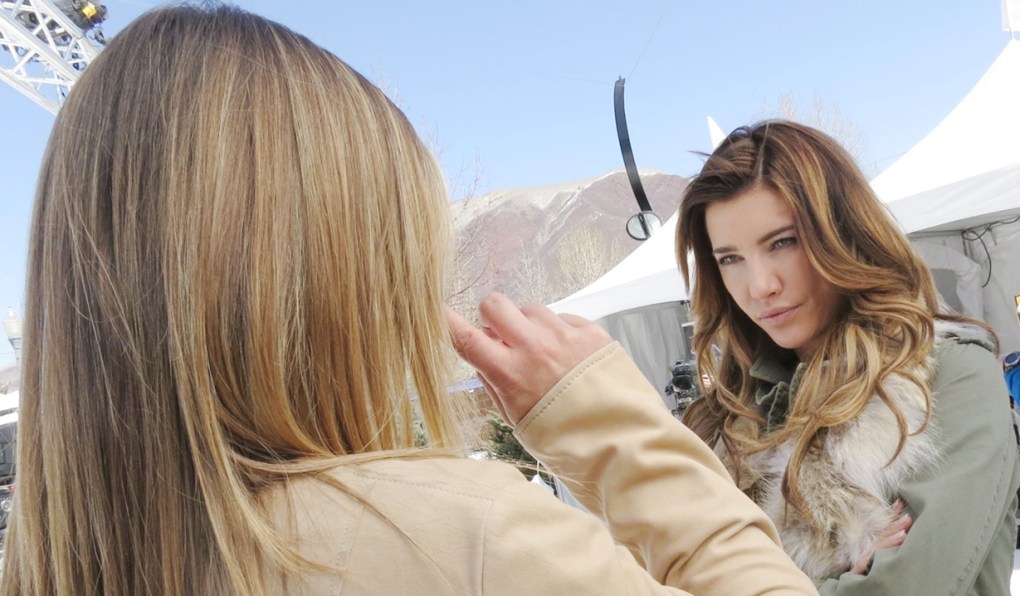 In the newest Young and the Restless spoilers, it’s “Rivals Week,” as classic episodes dating back to 1993.

Please note: Due to CBS soaps running out of original programming, classic episodes are airing Monday through Friday. CBS Daytime brings style, sophistication, seduction and sniping as “Theme Weeks” featuring classic episodes of Bold and Beautifulcontinues. Soaps.com will continue to bring our readers features on some of the favorite characters and actors.

11 Things to know about Bold and Beautiful’s Stephen Logan, who was a family man and frequent traveler.

Bold and Beautiful spoilers for Friday May 8:

Wrapping up on Friday, May 8: Having overcome astounding obstacles, Hope (Kim Matula, in a role currently played by Annika Noelle) and Liam (Scott Clifton) joyously say “I Do” in front of family, friends, and the many residents of the beautiful city of Puglia, Italy. Frustrated and brokenhearted, Steffy (Jacqueline Wood) updates Eric (John McCook) and Stephanie (Susan Flannery) on the dramatic events transpiring in Puglia. CBS airs the encore episode from June 26, 2012. 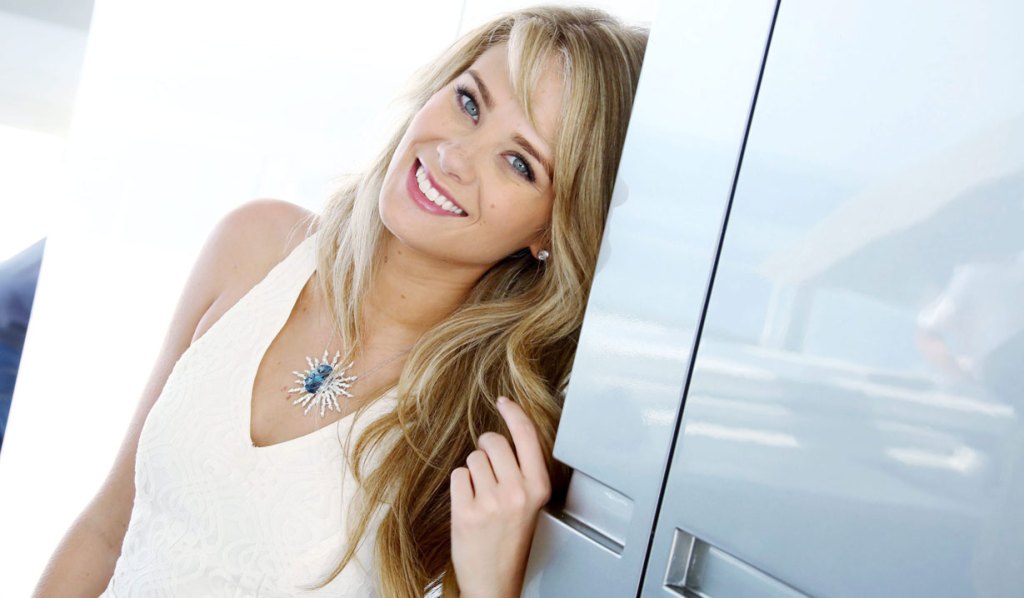 Bold and Beautiful spoilers week of May 11:

In this week’s Soaps Spoiler Digest, famous feuds, brutal attacks & courtroom conflict, we have new spoilers for all four soaps including Bold and the Beautiful, Days of our Lives, General Hospital and Young and the Restless.

One Life to Live and Young and Restless special guest, legendary musician Little Richard dead at 87 from cancer.

In the season six, episode two Good Witch recap, secrets are revealed at the chili cook-off.

Grab a front row seat because #BoldandBeautiful’s Fashion Week starts on Monday. ✨You won’t want to miss it! pic.twitter.com/yghx7rKrq7

In this week’s Soaps Spoiler Digest, famous feuds, brutal attacks & courtroom conflict, we have new spoilers for all four soaps including Bold and the Beautiful, Days of our Lives, General Hospital and Young and the Restless.

Bold and Beautiful spoilers for Monday May 11: 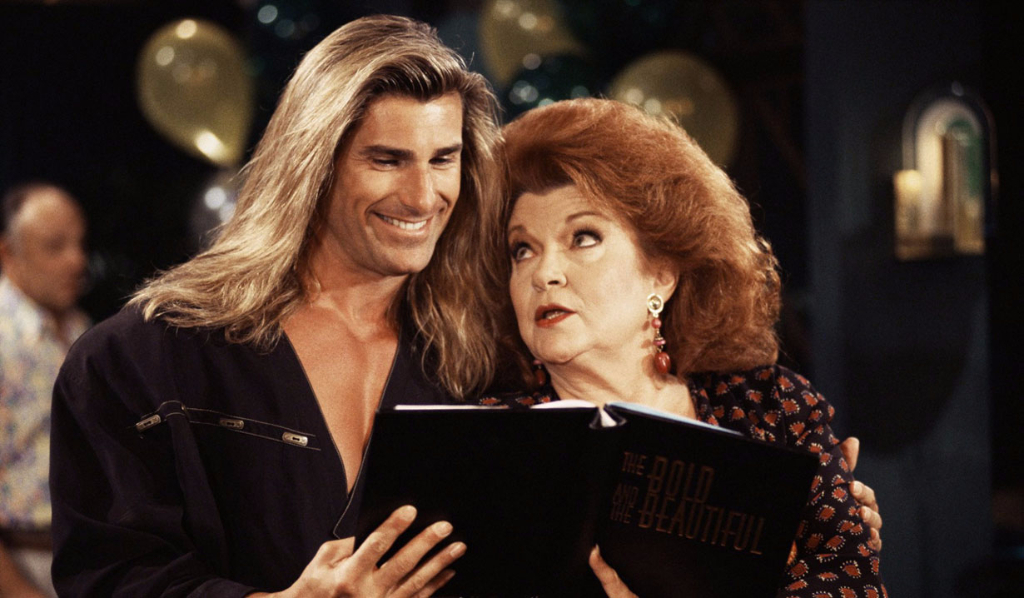 Interview… Darin Brooks talks B&B cliffhanger, wanting to be bad on the show and more.

In the magical setting of Villa d’Este on Lake Como, Eric (original cast member John McCook) and Stephanie (Susan Flannery) worry that the delayed Forrester Spring Collection may be their last, and Brooke (original cast member Katherine Kelly Lang) attempts to calm a distraught Ridge (then played by Ronn Moss). Also, Sally (Darlene Conley) and Lauren (Tracey Bregman) cause a scene in order to crash the runway show, hoping to witness the demise of their rivals. The episode originally aired Oct. 29, 1997.

Photo gallery! Refresh your memory on the fabulous and feisty character with 15 things to know about Sally Spectra.

Where are they now? The original cast of Dallas including Linda Gray and Patrick Duffy.

Bold and Beautiful spoilers for Tuesday May 12: 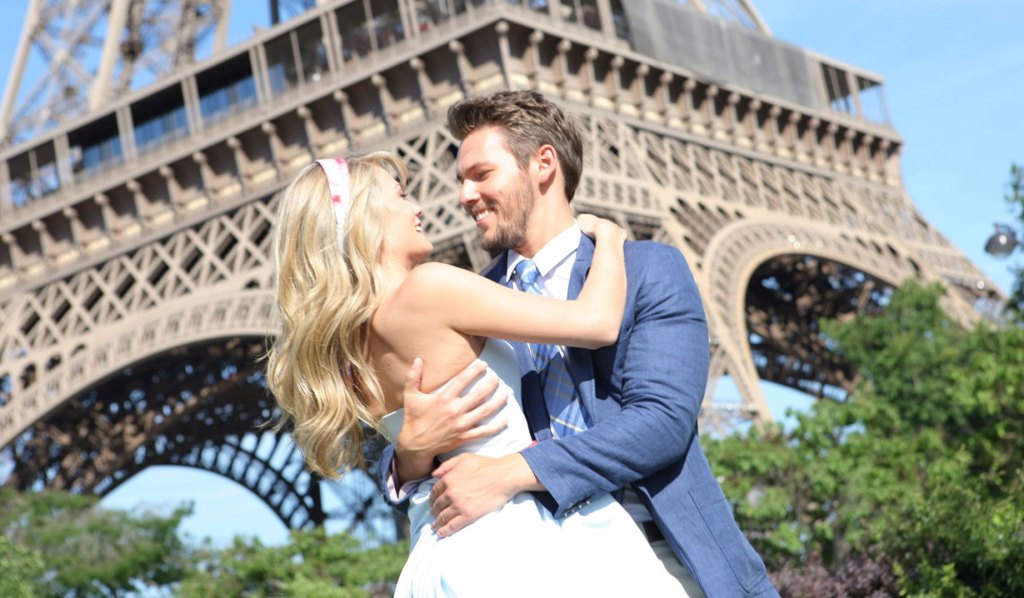 As Aspen Fashion Week gets underway, Hope (then played by Kim Matula) says goodbye to Liam (Scott Clifton) as paparazzi swarm her with questions and call her a fraud. Unaware that his father’s plan to attack Hope is in progress, Liam and Steffy (Jacqueline MacInnes Wood) talk about the memories they shared together in the beautiful mountainside town. The episode originally aired April 27, 2012.

Bold and Beautiful spoilers for Wednesday May 13: 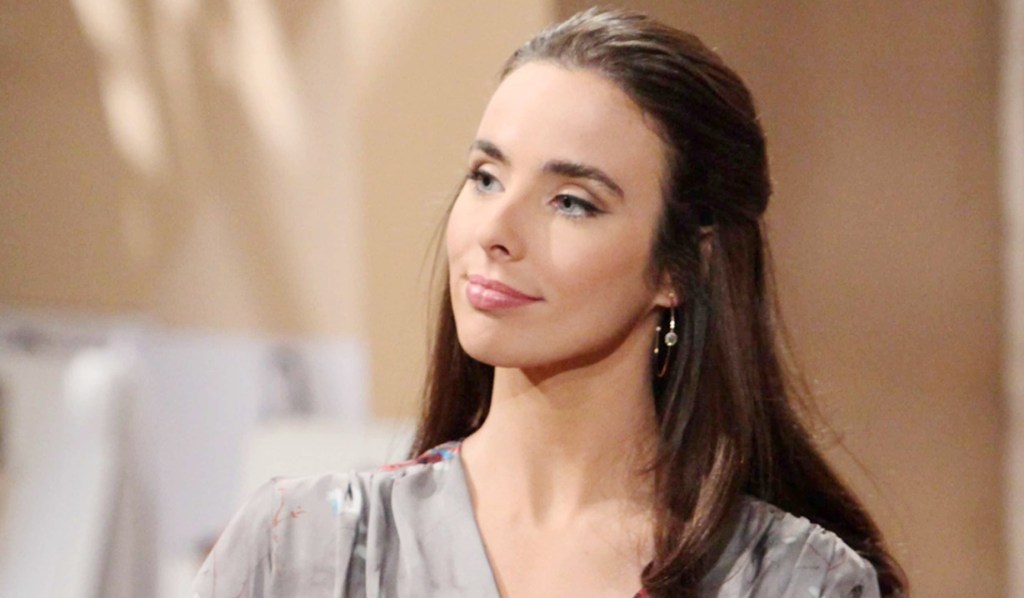 As Quinn (Rena Sofer) attempts to take the lead in final preparations for her fashion show, not everyone at Forrester Creations is on board. Wyatt (Darin Brooks) and Ivy (Ashleigh Brewer) encourage Quinn to move forward with her original plan for the show-stopper in spite of ruffling the feathers of Eric’s (original cast member John McCook) family. When Katie (Heather Tom) pays another visit to Eric’s home to thank him for his favor, he invites her to stay and watch the fashion show with him. As a sign of protest against Quinn, Ridge (Thorsten Kaye) decides to sabotage her presentation. The episode originally aired Nov. 11, 2016.

Interview! Darin Brooks and Kelly Kruger talk parenthood and surviving the quarantine as a couple.

Bold and Beautiful spoilers for Thursday May 14: 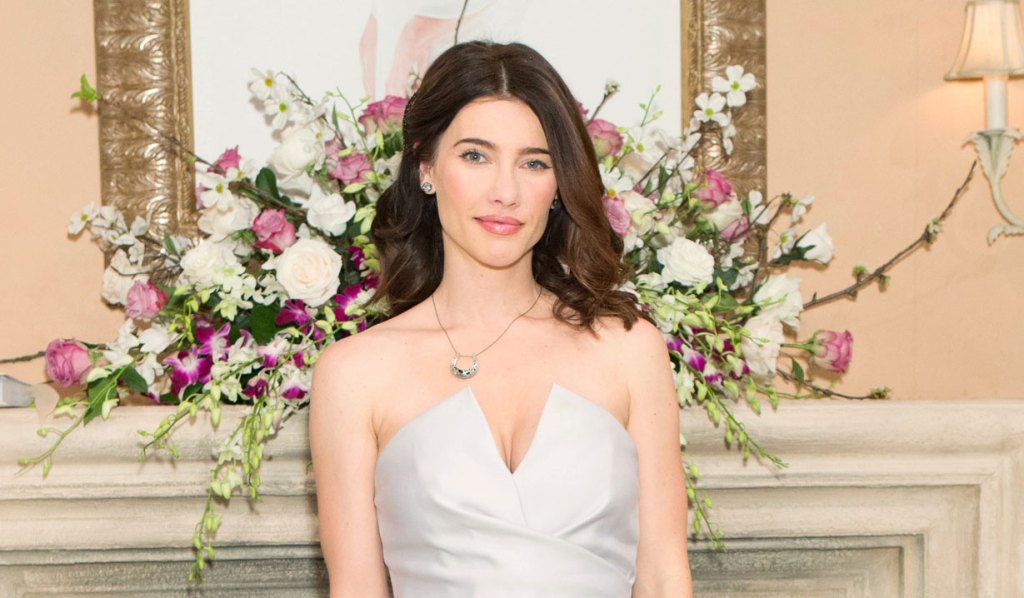 Before walking down the aisle to become Mrs. Liam Spencer, Steffy (Wood) participates in a Forrester Creations photoshoot with her cousin Ivy (Brewer) in front of Australia’s magnificent Sydney Opera House. In spite of how difficult it will be to see Brooke (original cast member Katherine Kelly Lang) with Ridge (Kaye) at the ceremony, Bill (Don Diamont) assists his son Liam (Clifton) with some last-minute wedding preparations. The episode originally aired March 21, 2017.

Fun speculation with poll! How Bold and Beautiful’s Sally and Thomas could team up when the show returns.

Bold and Beautiful spoilers for Friday May 15: 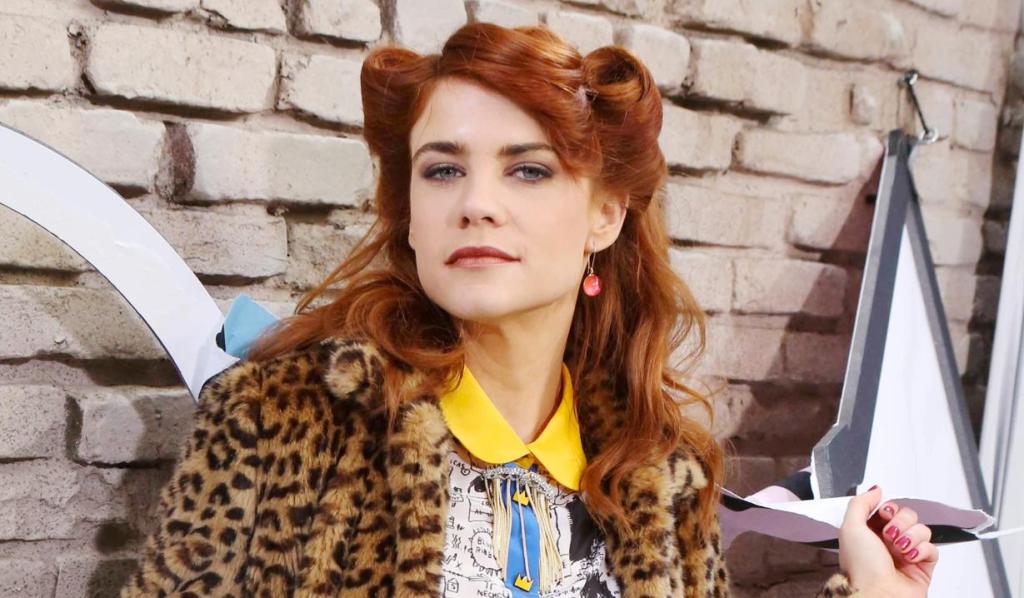 Stolen designs are in play as the Spectra fashion show is about to begin. Sally (Courtney Hope) feels pangs of guilt for betraying both Coco (Courtney Grosbeck) and Thomas (Pierson Fodé), while CJ (Mick Cain) arrives and reminds Sally about their deal regarding the sale of the building – if the show doesn’t go well, he will be forced to sell. Bill (Don Diamont) is less than pleased with the idea when Wyatt (Brooks) plays devil’s advocate, stating that the Spectra show could be a success. The episode originally aired April 14, 2017.

Soap opera poll! If it’s the only way they can return, would you watch soap operas without love scenes or touching of any kind? 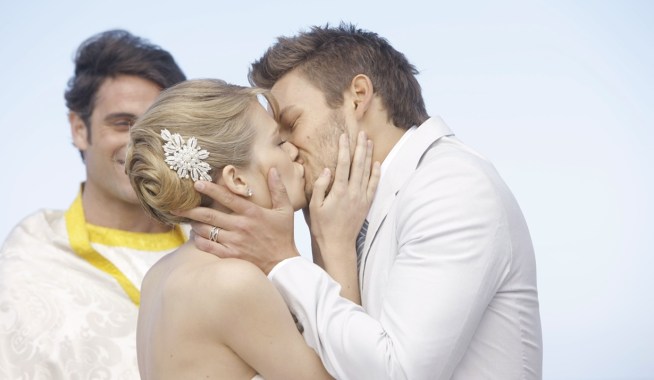 The Bold and the Beautiful spoilers May 4 - 8

The Bold and the Beautiful spoilers May 18 - 22 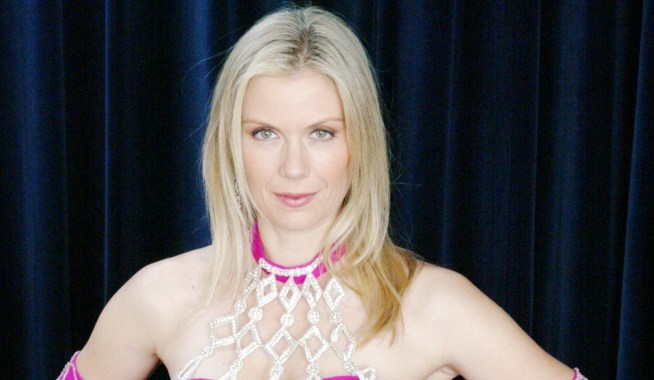 Salman Rushdie On “Road To Recovery,” His Agent Says

Never Have I Ever Season 3 Finale Recap: Devi Makes Two Life-Changing Decisions — Plus, Grade It!