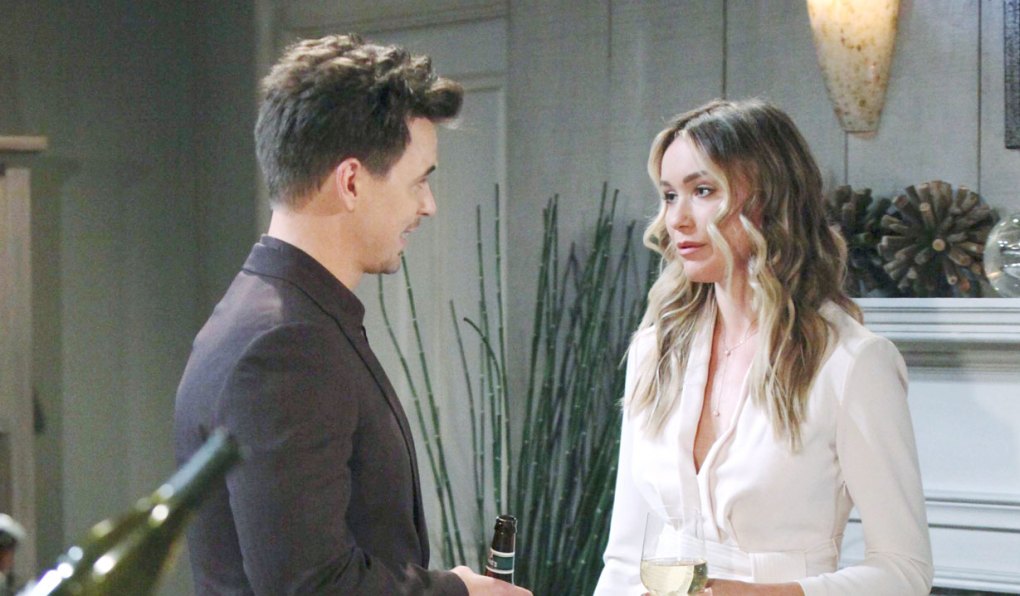 In Soaps.com’s newest The Bold and the Beautiful spoilers, guilt comes into play as Florence and Hope meet, Liam gets a bad feeling, and Wyatt crosses paths with a former acquaintance. Please visit this page each week for new preview videos.

In the newest Deconstructing B&B, Bill and Katie’s reunion is uncertain despite chemistry, the baby storyline’s likely to stall, and more.

Bold and the Beautiful spoilers for Thursday February 28:

In today’s B&B recap, Wyatt and Sally announce their departure from Forrester Creations, Katie and Bill reflect, and Liam convinces Hope to put her ring back on.

Bill reiterates his dedication to putting his family back together.

Bold and the Beautiful spoilers for Friday March 1:

In today’s B&B recap, Bill refuses to fund Spectra Fashions, and Zoe is appalled to find Flo working at Bikini.

Zoe confronts Flo when she finds her working at Bikini Bar.

Florence works alongside Danny as Keith Carlos returns to B&B.

Bill has a curveball for Wyatt and Sally with regard to Spectra Fashions.

B&B spoilers for the week of March 4:

In the weekly B&B Spoiler Video: Zoe warns Florence to get out of town.

Soap alums in the news feature B&B's Joanna Johnson in Good Trouble, plus stage appearances and a sad report of one actor suffering a stroke.

Behind the scenes! B&B's set decorators on Thanksgiving dinners, their most challenging creation and Darlene Conley.

In today’s B&B recap, Zoe lashes out at Flo, Steffy thinks about Liam, and Flo runs into a familiar face.

Hope is introduced to Florence by Zoe.

Wyatt feels Liam should consider Hope's request regarding Steffy and the girls.

Spoiler speculation! Wyatt and Flo’s secret connection and what might happen.

Vote in Soaps.com's B&B Poll: Spencer Fashions to let us know if you're excited about the new fashion house.

Flo and Wyatt cross paths and revisit their past.

Liam senses something is off after Hope reveals she met Phoebe's birth mother through Zoe.

Things heat up between Xander and Zoe.

After running into his old acquaintance, Flo, Wyatt invites her to join him, Sally, Hope and Liam for dinner.

Flo is tempted to come clean with Hope due to her guilty feelings.

Taylor weighs in on Liam, Hope, and Steffy's situation.

Hope feels a bond with Florence after discussing what it feels like to lose a child.

Zoe interrupts a crucial moment between Hope and Florence.

Wyatt supports his brother and promises Liam things will improve.

Florence and Wyatt were in love in the past as high school sweethearts, but he and his mother had to leave town in the middle of the night without a chance for them to even say goodbye.

Zoe loses it upon discovering that Flo spent time with Hope and Liam.

Sally's off the cuff remark could lead someone toward the truth about Phoebe.

Flo tells Reese she can no longer keep his secret.

Steffy reaches a big decision about the future.

Steffy leaves for Paris, taking the girls with her, to give Hope and Liam space to focus on their marriage and healing.