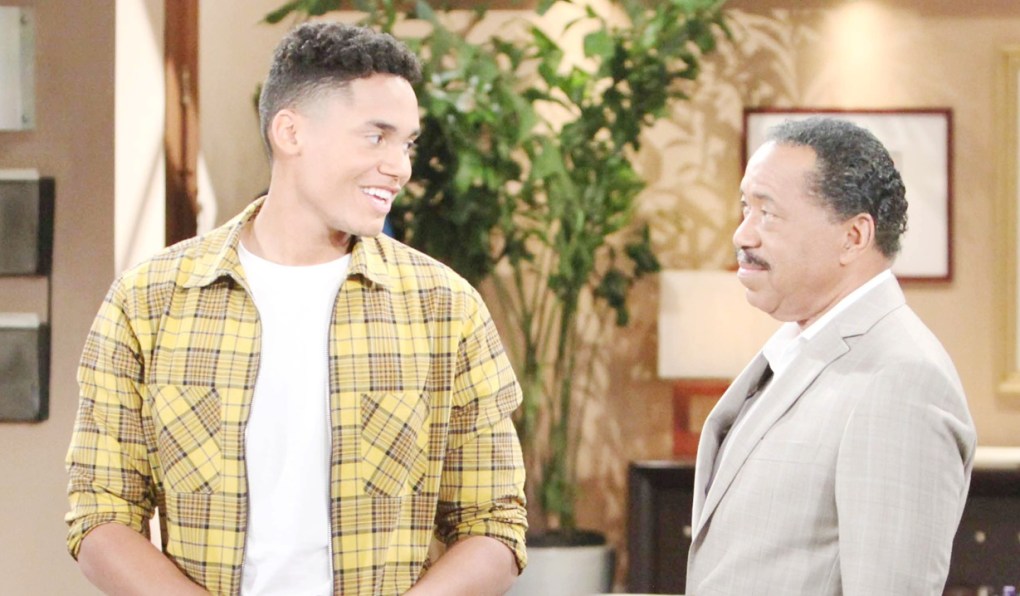 In Soaps.com’s latest batch of The Bold and the Beautiful spoilers there is plenty of drama at Forrester Creations surrounding interns Xander and Emma, while Sally decides to stay in town, and Taylor makes another appearance at her daughter’s house. Please return to this page each day for new teasers in the spoiler videos.

In the latest Deconstructing B&B, Sally’s return started off with a bang and Liam proposed yet again.

Bold and Beautiful spoilers for the week of June 18:

In the weekly B&B spoiler video Bill refuses to let Steffy marry Liam, and things heat up between Wyatt and Sally. Take a look at the loving photos of B&B stars honoring their dads on Father’s Day.

In Monday’s B&B Spoiler video, Sally blames Bill for everything, as Emma confides in Xander.

Sally rants about Bill, leading to her and Wyatt commiserating over their similar circumstances.

Maya learns Emma is a Barber.

Simon turns back up as a Forrester Creations intern since Achileas Andreas of Greece returns to B&B.

In today’s B&B recap, Hope warns Maya about over-stepping her authority, while Wyatt convinces Sally to stay at his place.

Justin visits Forrester Creations to intervene with Emma, as Maya fires her, and Hope then steps in.

Sally decides to stick around at Wyatt’s urging.

Bill’s assistant Alison appears with Theodora Greece back to B&B.

In today’s B&B recap, Bill informs Steffy she’s marrying him, not Liam, while Hope learns Liam is planning his wedding.

Liam and Steffy plan the next step in their future.

Brooke admits to Ridge that it’s difficult for her to feel happy given the way things went with Liam, Hope, and Steffy.

In Thursday’s B&B video, Steffy accuses Bill of being selfish, and Maya warns Xander away from Emma.

Julius and Vivienne are taken aback by Xander’s intentions regarding Forrester Creations and Emma.

Bill, who still wants Steffy, meddles in her relationship with Liam again.

Hope wants Liam to return to working on the Hope for the Future line.

More spoilers for The Bold and the Beautiful:

Sally’s invited back to Wyatt’s place to sleep it off and they kiss.

Coming up next week on B&B:

Brooke wants answers from Bill about the harm he’s done to his family.

Quinn and Eric catch Wyatt and Sally in a clinch.