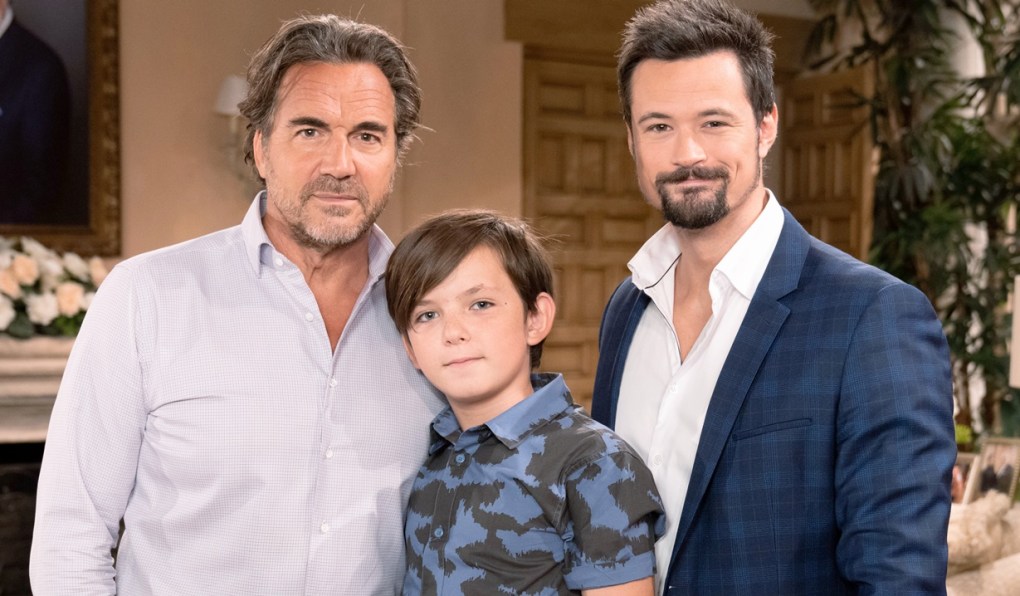 It’s up, up and away in Soaps.com’s newest spoilers for The Bold and the Beautiful from Monday, October 3, through Friday, October 7. First, Ridge takes flight to make an impassioned plea to Taylor in Aspen. Then, Brooke follows suit to make an impassioned plea of her own. (Man, that’s a lotta jets and a lotta impassioned pleas!) If you’ll be so kind as to please bring your seatbacks and trays to their upright and locked position, we’ll come through the cabin serving more of exactly what you want: spoilers!

In Monday’s recap, Hope questions Brooke, Taylor and Steffy leave for Aspen, and Ridge walks out on Brooke. 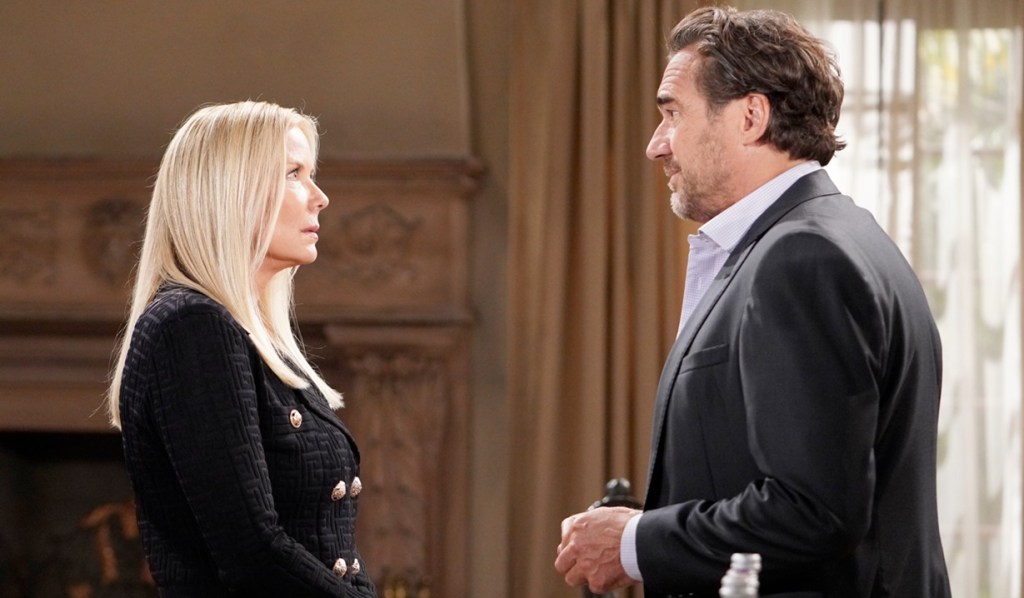 As scenes begin airing from the promised location shoot in Aspen, Steffy takes Taylor to her old stomping grounds to get clear about what she wants in life.

Uh-oh. Ridge’s heart breaks when Brooke gives the wrong answer to a specific question. Will this be the catalyst for a split that will send him to Aspen on a search for the other woman who holds a place in his heart? We can practically guarantee it.

Thomas marvels at Hope’s ability to always see the best in him. We can only assume this means that she’s taking his side against her mother in the Case of the Mysterious Call to CPS. Find out who we believe to be the real culprit here.

As Ridge contemplates his destiny, which usually lands him directly in his Logan’s arms, will he instead turn to his ex-wife Taylor? Perhaps he should consider spending some time alone. If he needs a reminder of what it’s like to be torn between these two women, we’ve got a handy dandy guide to Brooke and Taylor’s fiercest battles that will jog his memory.

When isn’t Liam anxious about something?!? This time, he’s tied up in knots about Thomas’ endgame for Hope. Sounds ominous, we have to admit.

Surrounded by the beauty of Aspen, Taylor has an epiphany. Maybe she wants to marry Ridge on the top of a mountain next time. Why does that sound so familiar?

Now in Aspen, an emotional Ridge pleads with Taylor to hear him out. Make him work for it, Doc! Actually, perhaps she should just walk away considering all the times Ridge has proven he’s just not that into her.

A surprise visit from Bill provides Brooke with important information. Will it be proof that she wasn’t the person who called CPS on Thomas as she’s been insisting? If so, will she try to convince her ex-husband to let her take the Spencer jet to Aspen to update Ridge before it’s too late?

Never mind, she doesn’t need the Spencer jet! Determined to fight for Ridge, Brooke takes the Forrester jet and heads to Aspen. But what will she find when she arrives? Might the man she loves, who is convinced she betrayed him, be in the arms of her bitterest rival and the mother of two of his children — Taylor?!? If Steffy has anything to say about it, Brooke will undoubtedly get an eyeful. Cue the single tear!

Well, this doesn’t sound good at all: Donna voices her concerns to Eric about Ridge, Brooke and Taylor. Is it possible Eric received some devastating news that has left him prostrate with grief?

As we head into the last quarter of 2022, Soaps takes a look back at the best and worst of the year (so far!). See if you agree with our picks for hits and misses in the photo gallery below. 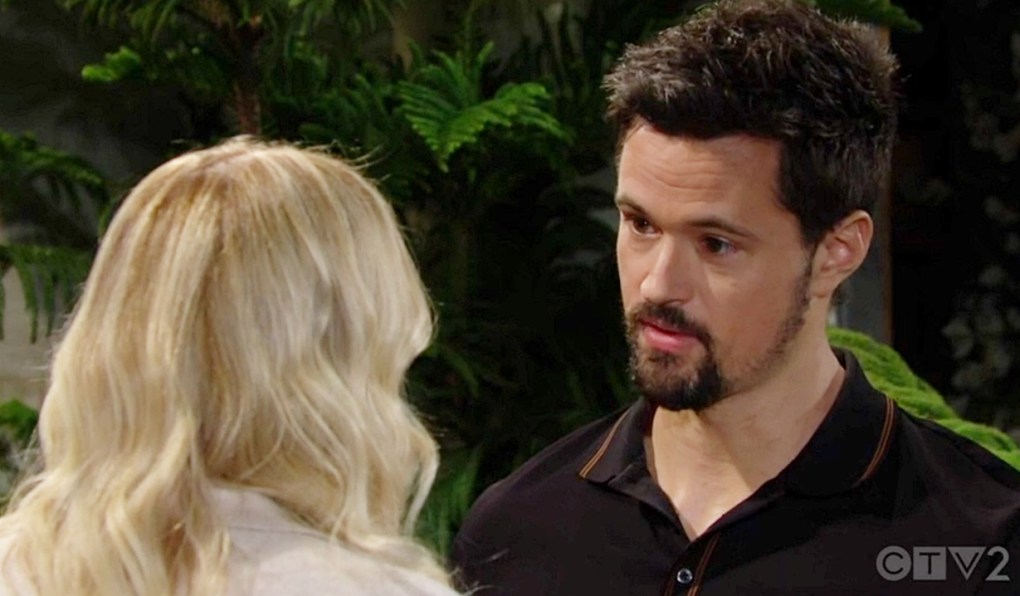 Better brush up on your math skills, because loyalties are getting divided and subdivided in Soaps.com’s newest spoilers for The Bold and the Beautiful from Monday, September 26, through Friday, September 30. Not only does a Thomas/Brooke face-off pull Ridge in two directions, but questions about Douglas’ future leave Hope and her mom seeing less eye to eye than eye to “I… don’t know about that.” As a result, the Forrester vs. Logan fight becomes a kerfuffle that also includes a Logan vs. Logan conflict. Read on to find out what’s up with all the showdowns to come… 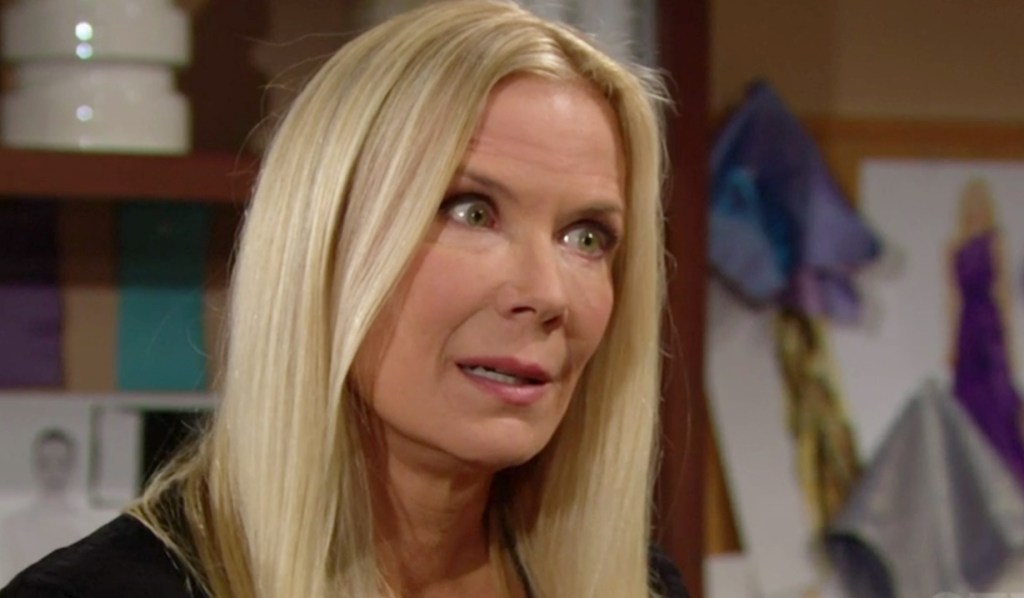 Oh boy, here we go! During an argument with Thomas, Brooke gets scared for her safety. Hopefully, for his sake, they’re not having their confrontation out on the edge of a cliff this time around!

Young & Restless’ Nikki Newman visits Forrester Creations before completing a deal with her ex, Deacon. Will she also cross paths with the notorious Sheila, once Genoa City’s most-wanted criminal? Inquiring minds want to know! While we wait to find out, see photos of Nikki with Eric and others here.

The more, the merrier: Alum Jack Wagner (ex-Nick) and many other soap stars — as well as Hallmark favorites — are returning to the screen this holiday season for the network’s Countdown to Christmas special!

In Tuesday’s recap, Ridge and Thomas reel, Brooke vows to protect Douglas, and Liam weighs in on the knife incident. 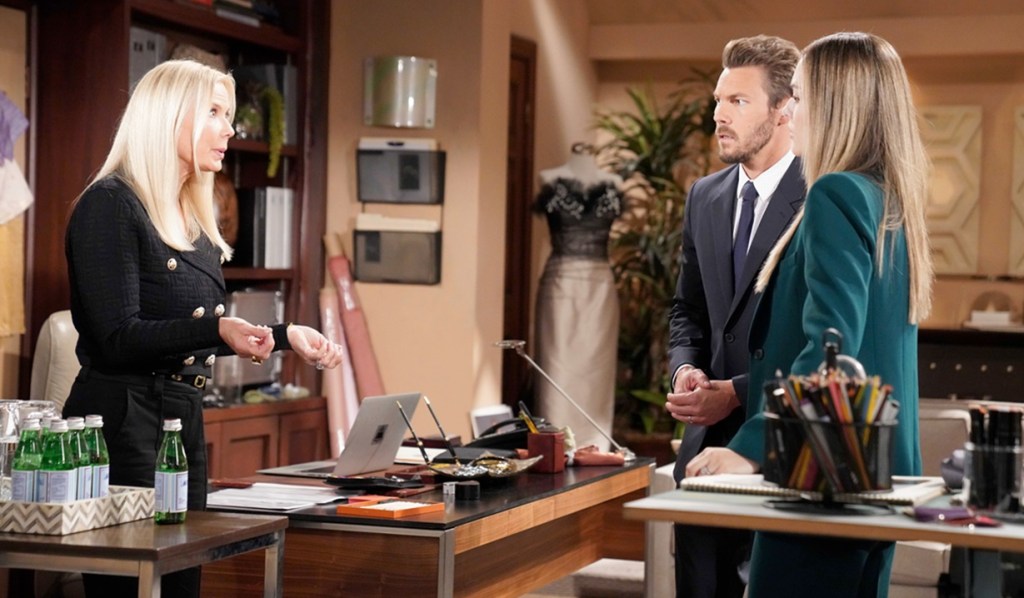 Infectious excitement! Bold & Beautiful alum Adrienne Frantz ended a lifelong search — with help from none other than Ryan Reynolds!

Brooke causes alarm when she recounts her scary moment with Thomas to Ridge. Once again, the beleaguered dressmaker is going to be put in the position of choosing sides. Will he support his wife… or go to bat for his son?

When Ridge receives unwelcome visitors at the Forrester Mansion, will the drop-in have to do with the unsavory incident between Brooke and Thomas? And will one of the visitors be eating a hot dog?!?

Chicago Fire Spoilers! Gallo moving on, Brett moving forward. Plus, Chicago Fire stars and their real-life partners in a new photo gallery inside!

In today’s recap, Douglas is questioned, Thomas isn’t thrilled, Steffy is upset, and Ridge hopes against hope that he’s wrong with what he suspects. 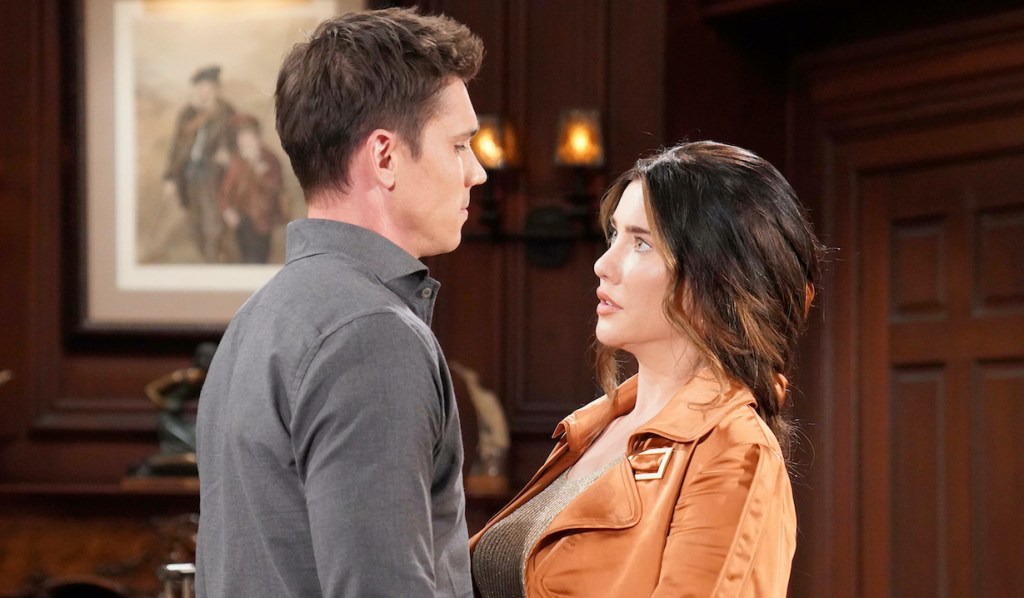 It’s coming… One B&B character’s world is about to be rocked — might another’s be about to come to an end?!?

It looks like we guessed correctly that law enforcement would be making the scene at the Forrester digs. Watch for Ridge to vigorously defend Thomas to authorities who are asking hard questions. Given that Ridge once had the power to decide whether Flo would stay in jail or go free, the determined dad should be able to make his offspring’s latest troubles go away, no?

Plot twist! It’s Logan vs Logan when Hope and Brooke disagree about Thomas’ ability to parent Douglas safely. What are the odds that Brooke purposely provoked Douglas’ dad to ensure that the boy would stay with her daughter and Liam?

Scott Clifton answers the question ‘what has two legs, eight limbs and four wheels’ — and is about to make your day!

A heartfelt goodbye… Bold & Beautiful cast says farewell to the end of an era!

In Thursday’s recap, Ridge gets evidence that Brooke lied, Bill calls Steffy with an offer, and Taylor decides to leave town. 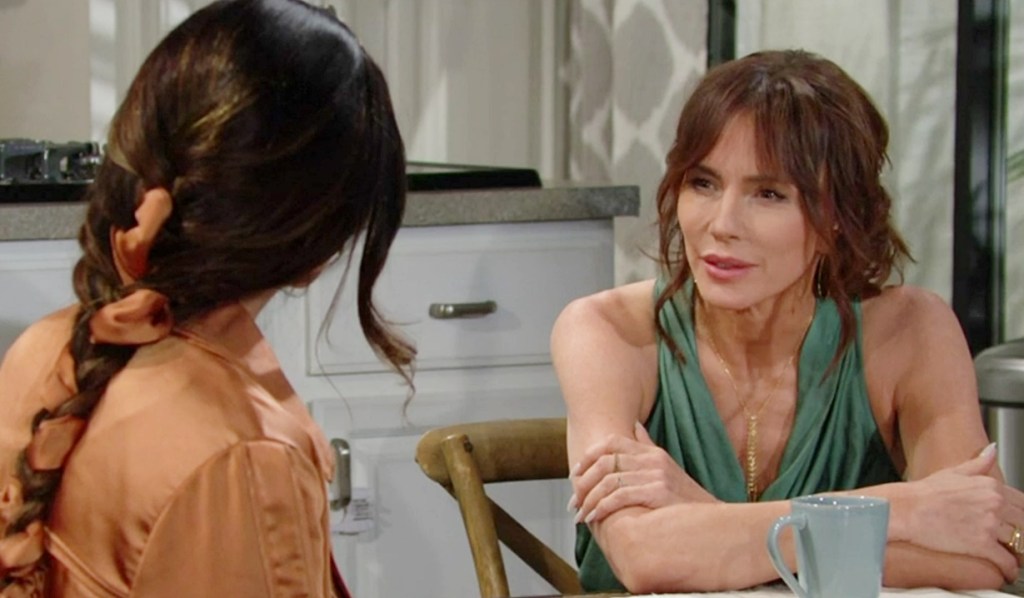 Shocking scheme?!? Who called CPS on Thomas? — it may not be who you think at all!

When Taylor expresses a change of heart to Steffy, will she finally see the light where Ridge is concerned and decide she doesn’t want the flip-flopper back in her life? If so, how will her daughter take the defeat after running such a fervent campaign to reunite her folks? And will such a turnabout mean that the show got the message we felt compelled to send?

Wait, what?!? The teaser reads: Thomas puts Ridge on blast for taking Brooke’s side in his current troubles… but didn’t Ridge just pull out all the stops to defend his son when the police came calling? He has to get points for that, right?

In Friday’s recap, Ridge struggles with Brooke’s lie, Steffy and Taylor plan to leave town, and Liam and Brooke puzzle over the CPS call. 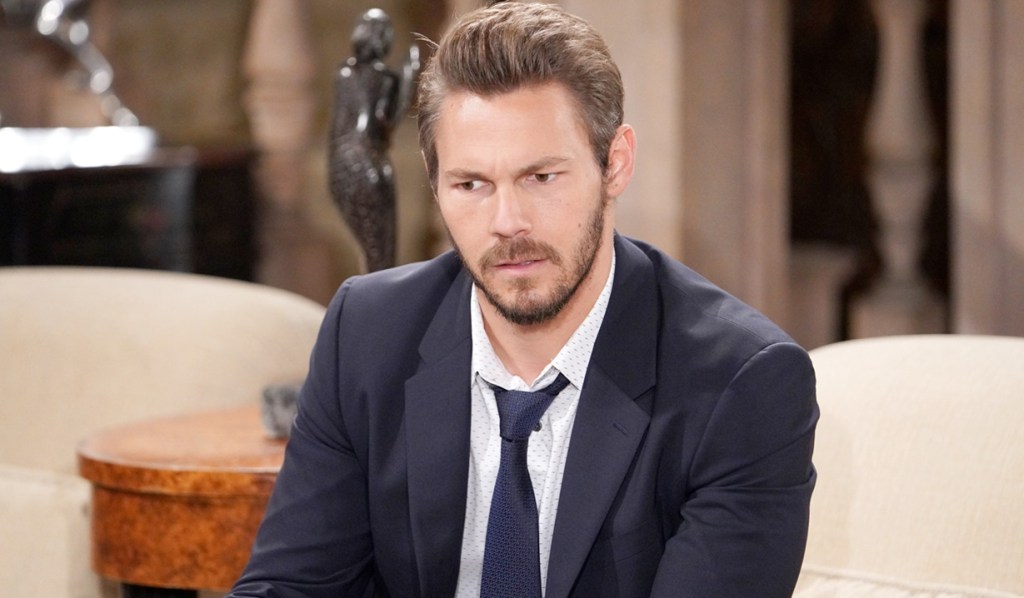 Hasn’t she been away enough?!? Steffy arranges for Taylor to take a trip to clear her head. Honestly, you’d think a world-renowned psychiatrist like her would be able to handle things better. After “dying” twice, shouldn’t it take more than a mere Logan vs. Forrester war to have Taylor packing her bags?

When Ridge calls on a friend’s favor to get the truth, will Brooke be exposed… or will he learn that his son is truly struggling again and that his wife was right to fear for her safety? Dun-dun-dunnn!

Get the 411 on the Bold & Beautiful characters who are poised to turn over a new leaf as we look at the big changes that could be coming our way on all the soaps this fall in the below photo gallery.