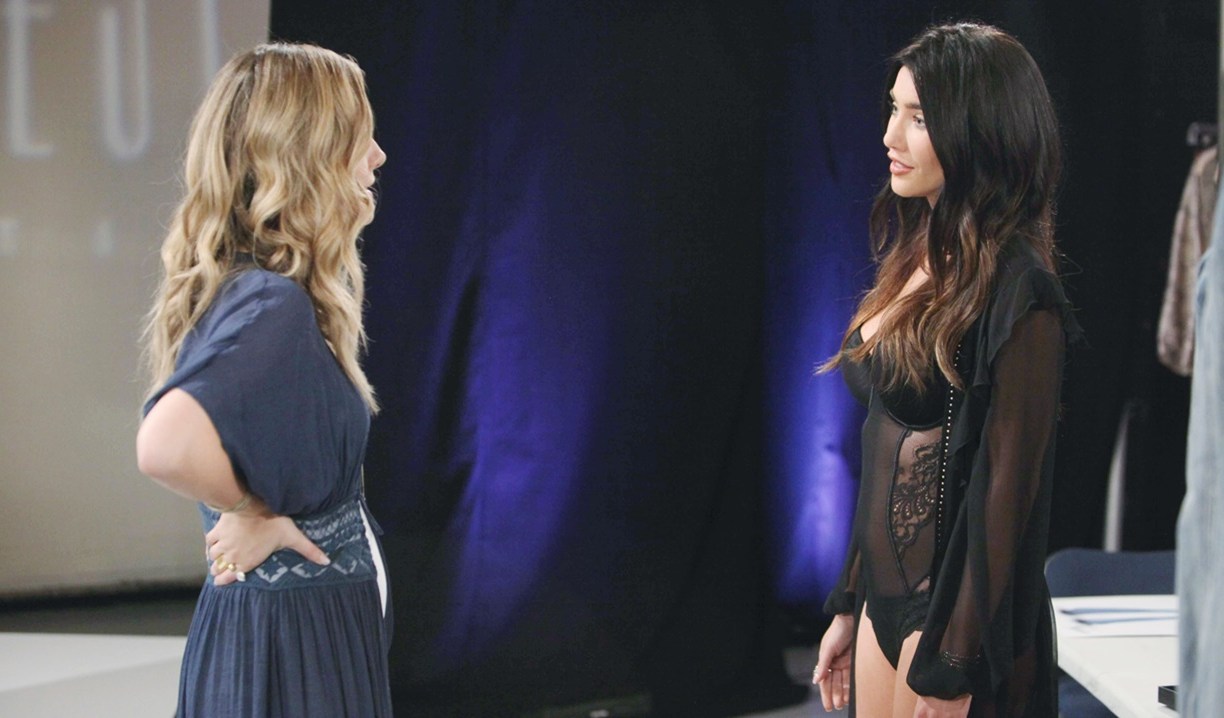 I’m enjoying all the drama at Forrester Creations and surrounding the custody suit particularly since we’re seeing more characters lately as a result, and there’s been somewhat of a return to focusing on the fashion house aspect of the show. Thoughts:

As hoped, the drama has bumped up at Forrester Creations and we’ve been seeing more characters interacting, always a good thing on this show. There have been clashes between Brooke and Ridge, Brooke and Steffy, Steffy and Hope, and snippy exchanges at board meetings related to the Hope for the Future versus Intimates controversy; all engaging. I was watching Quinn and Ridge holding a conversation about his decision, and Katie’s custody suit, and thinking how long it had been since we had seen a variety of interactions – Steffy and Sally was another example – it should always be that way. As for Brooke’s reaction to Ridge choosing Steffy’s line, it was interesting and more than a little hypocritical that she was accusing him of being biased toward his daughter when she was being biased toward her daughter. After her bragging that she had more influence over him than Steffy, it was kind of funny to see him choose the intimates line. Because this is a soap opera, Brooke being irked with her husband served as a catalyst to send her back into the orbit of a past love.

In the last Deconstructing B&B, Brooke helping Bill was complicated and the prediction that it would stir up drama proved to be true. Brooke’s visit to Katie to question her about the custody suit had her sister in tears, and that was most likely the tip of the iceberg as Bill is clearly seeing Brooke in a new (old?) light, so her marriage will almost certainly be affected as well. Depending how serious Brooke stays about taking Bill’s side in the custody dispute, there could be more clashes ahead. I like it. Fans weighed in on Brooke taking Bill’s side:

I am SO sick of Brooke going against Katie when she should be on her side. She should be making a terrible and agonizing decision Katie has made easier for her not worse. #BoldandBeautiful.

Brooke is concern about Will. She is doing the right thing. She’s taken Bill’s side every since Will was Brooke will be Bill's only support system again! I am ready!!.Go #Brill #BoldandBeautiful

As for Thorne proposing to Katie, well, that sounds a lot like Mr. and Mrs. Dull; just not into it, as I was totally turned off by him pushing himself into her life when she was still with Wyatt (after he couldn’t get Brooke)…now he’s inserted himself into the situation with Will and looking to get married? Way too soon.

Xander, Emma, and Zoe continued in their Soap Opera 101 triangle, with the inexperienced girlfriend having dodged any chance of having sex and the temptress having moved in on the hapless dude who can’t help but want to get some action despite really caring about his girlfriend…been done a million times…and with this trio, there are no stakes. I don’t care who wins the guy. Having Zoe go after an established character would possibly be more interesting depending on the circumstances.