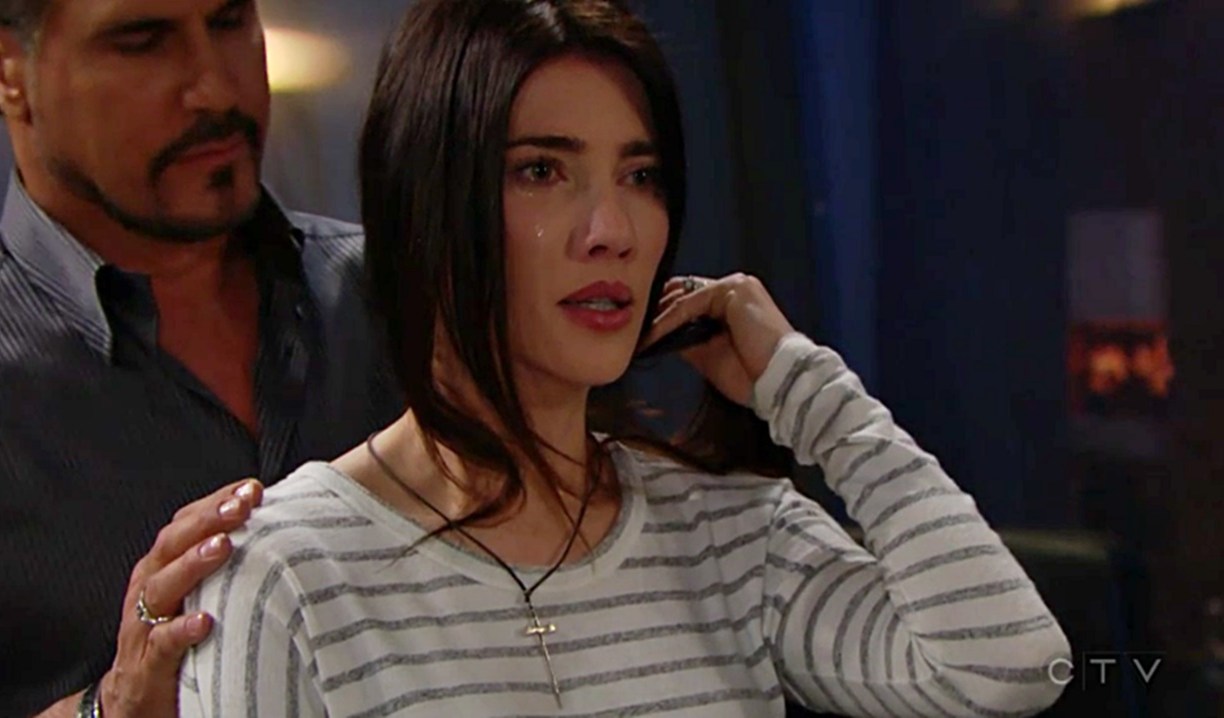 Once again, Liam’s love triangle was in the spotlight, at least with a new twist that will change things up. Thoughts:

Up your game.
The interns remained unremarkable despite their bit of drama, and though she’s conniving, Zoe’s more odd than evil. She doesn’t exude the delicious twistedness of Quinn or Sheila, and even if she did, she’d have to have a target viewers are invested in for it to work. The weak links at Forrester right now only emphasize the absence of stronger, established characters like Rick, Caroline, et al, even Thorne, a core character, has all the presence of wallpaper. What’s happening with the couture line? How are they even staying in business? I suppose with no competition it’s not difficult…sigh. Dramatic change is needed here.

Done.
After Steffy found Liam in a hot and heavy make-out session with Hope, everyone once again got in on the drama. Ridge had a go at Hope over it, then apologized and defaulted to blaming everything on Bill, while Brooke was encouraged by the turn of events, and couldn’t understand why Hope or Liam felt guilty. She told Liam he’d done nothing wrong, though I’m sure, back in the day, had Brooke been living with Ridge and caught him doing that with Taylor, it would have been very wrong, and though she’s near-hysterical about Steffy having had sex with Bill, she, of course, was with Ridge’s father, Eric, and her daughters’ men. But please ignore all that because Brooke must get Liam back with Hope at any cost. As always, such a curious mindset considering past history.

Brooke, Ridge and Taylor are profoundly negligent parents for encouraging their daughters' relationships with the waffle iron. #BoldandBeautiful

In any case, Steffy finally had enough of Liam’s crap, steeled her heart, and went to strike a deal with Bill. This raised the pesky eternal question of why she needed to turn to any man:

I get Steffy is trying to make a power move or whatever. But is it possible for a woman to be single and raise her kid.? Just take some for herself and kid. Is that unheard of.? Lol a little independence never hurt anybody… ??‍♀️ #BoldandBeautiful

With the thunder booming ominously in the background and the symbolism of Bill placing his sword necklace around Steffy’s neck, it certainly felt as though she was ‘making a deal with the devil’. As mentioned in the last Deconstructing B&B, Steffy giving into Bill wouldn’t send a good message, which is likely why they framed it as her decision and on her terms. Bill’s smidge of vulnerability in wanting to hear that Steffy cared for him also served to make it seem less like he was acquiring a possession. All in all, it was a welcome twist that should shake up Forrester Creations and the Liam triangle, though it will also extend it, as this is quite possibly just a new and bigger hurdle to a Steffy and Liam reunion. If nothing else, it switches up the dynamic as the clash between Liam and Bill on Friday’s episode demonstrated, with Liam finally getting a bit of a rude awakening about the consequences of his divided loyalties.