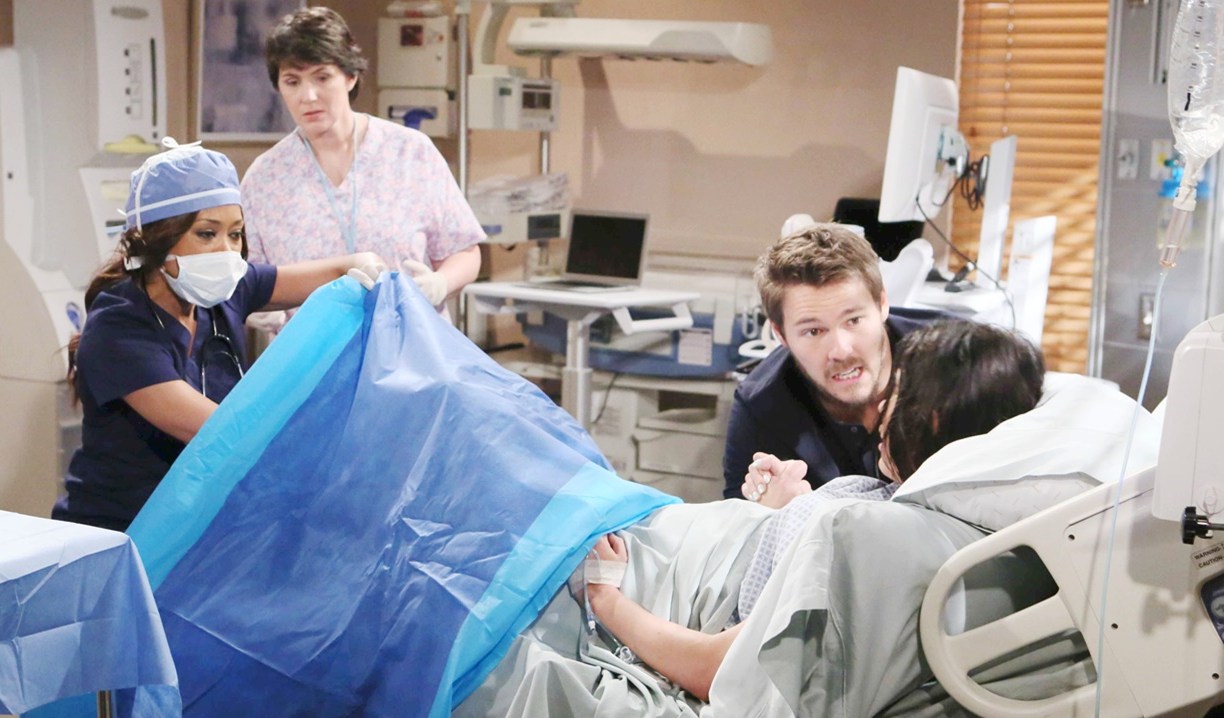 The Liam/Steffy/Hope triangle continued to advance predictably as the wedding was postponed and the women once again found themselves waiting to see what Liam would do in the wake of Wyatt’s revelation. Thoughts:

In it to win it.
As mentioned in the last Deconstructing B&B, Wyatt shocked the wedding party and gave viewers an entertaining ‘moment’ followed by the guests buzzing around speculating on why he stopped the wedding and what he might be telling Liam. Hope relieved Liam of the burden of postponing the wedding by doing it herself, which left her mother twitching in irritation as her plan to marry them off quickly fell apart. Ridge and Brooke almost seemed to be competing on behalf of their daughters as he urged Steffy to head to the cabin in light of the new developments, and Brooke instructed Hope to go push for an elopement minutes after she’d changed out of her wedding dress. It’s a little strange for the parents to be so gung-ho on Liam considering his track record.

Backfire backlash.
Bill had blowouts with both of his sons after Wyatt told the truth. It felt like Wyatt finally saw for himself how low Bill could go and it was a relief that not only did Katie stand by him, but that he was able to turn and walk out on Bill and tell him he was done without a backward glance. I just don’t get Bill’s approach at all – regardless if he and Steffy had a huge love for one another in the past, his current tactics are creepy, particularly because she’s telling him ‘no’ and he keeps pushing, and also because he’s behaving as though his relationships with his sons are of no consequence. If Steffy was acting torn between Liam and Bill, I could maybe see it. Anyway, Liam also confronted his father, and called him out on his obsession with Steffy and trying to break up his granddaughter’s family, while Bill took the approach that he knows what’s best for everyone and can see how it will all inevitably play out. If nothing else, Bill at least got viewers’ attention with his remark about Liam and his flip-flopping, pointing out it’s sick the way he plays Hope and Steffy against one another. Fans reacted to the showdown:

Someone finally told Liam he was playing Hope and Steffy against each other. Bill spoke the truth there. #BoldandBeautiful

Bill is a dirty dog, but him reading Liam about being a fickle ass is #BoldandBeautiful pic.twitter.com/YnRtTqCgKz

Switching gears.
With everyone in limbo as to what Liam’s next move would be, the focus changed abruptly after Steffy went into premature labor. Liam rushed off to the hospital, and called Ridge as the situation escalated. He updated Brooke, who showed concern for Steffy and the baby despite it throwing a monkey wrench into her plans for Hope to marry Liam before Kelly’s arrival. Hope also expressed hope that the baby would be okay, and you could see her deflate just a little at the news, which made one feel for her. With issues surrounding a decelerating heartbeat, viewers were left waiting to see until Monday whether the baby would be okay.