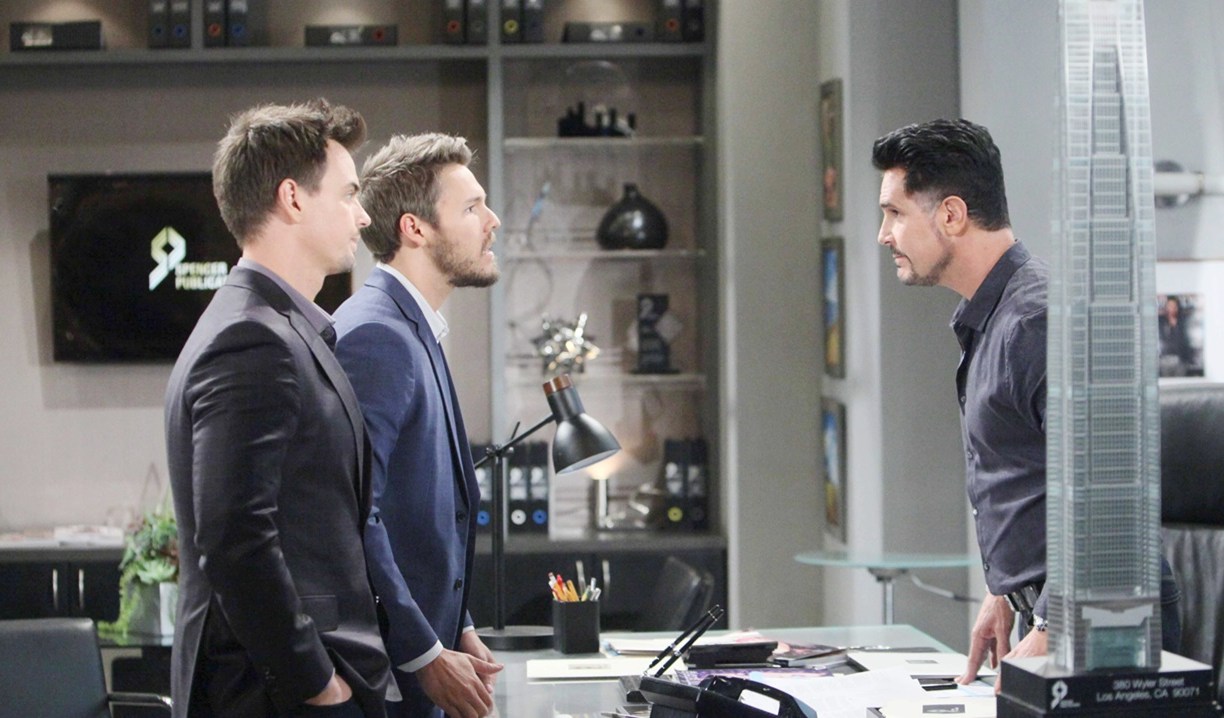 Sure, Bill Spencer is known for being ruthless and cocky, but since he became hyper-focused on building a certain skyscraper, his behavior has been, more often than not, incomprehensibly cold and selfish. As mentioned in the last Deconstructing B&B, Bill’s near-death experience didn’t change much. Though he was appreciably more subdued when he approached Steffy about signing the annulment papers, in this week’s Soaps.com focused blog, I explain why I’ve been having trouble connecting to the character lately.

I can’t invest in his relationships

Seemingly overnight, Bill stopped referring to Brooke as the great love of his life and placed the label on Steffy instead. Despite the history with Steffy and Bill, it all happened way too fast (for the sake of a plot change) to ever be taken seriously, and as a result, I was unable to get on board with what he was supposedly feeling at all. It will be much more difficult to invest in his love relationships after that move. At least when he fell for Brooke and left Katie there was a fully-developed storyline, the complexities were explored, and the beats played. Similarly, his relationships with his sons also seem to be disposable now, as he has unblinkingly threatened to cut them out of his life over not getting his way.

In soap operas there is always hypocrisy, but Bill took it to a preposterous level when he accused Wyatt of dishonoring the Spencer family for wanting to marry Katie, when Bill had sex with Liam’s wife while they were still married, was all set to sail off on the Stella Maris with her afterward, and later proposed to her. It’s like morality rules simply don’t apply to him. Going back to the skyscraper obsession, it was bizarre to see Bill depicted as putting the building of the structure ahead of his closest relationships. More recently, I was disappointed to see Bill wheeling and dealing with Liam and Wyatt with regard to the women in their lives. Thankfully Liam pointed out that women are not possessions and ordered him out. Bill has now attempted to manipulate Steffy using the secret of her mother being his shooter as leverage. I sometimes feel like there is no line he won’t cross.

He’s been too cold

His love for his sons and his determination to be a better father than his own, was what humanized Bill and made me root for him despite his actions in many cases, and I feel that can no longer be counted upon. Bill had a scene with Liam in which he was relieved to know his son hadn’t shot him after all, which was an improvement, but in light of all his despicable actions, still rang a tad hollow, especially as he was already planning the next manipulation that could affect Liam’s marriage. As for the ultimatum he gave Wyatt, I was disappointed that the near-death experience didn’t make more of a change in Bill.

B&B is known to be silly sometimes, such as with Steffy’s nightmare that she delivered a baby with Bill’s crying face, and it’s entertaining in small doses. However with Bill, the obsessive behavior (beginning with the skyscraper), the cold emotionless ‘villain’ stuff, and the repetitive mantras (“Liam needs to be with his wife,” “Steffy was mine first”) have made him seem like more of a caricature than a character at times. When I think back to some of Bill’s emotional scenes throughout his history with Katie, for instance, it really seems like he’s been written as more one-dimensional lately, with exaggerated behavior, possibly to make him seem more capable of the outrageous things he’s been doing. I’d rather have seen more complexities to the character – how did he really feel after Katie and Wyatt told him they were in love? Was he wounded? Did he wrestle with doubt after lashing out at them with threats?