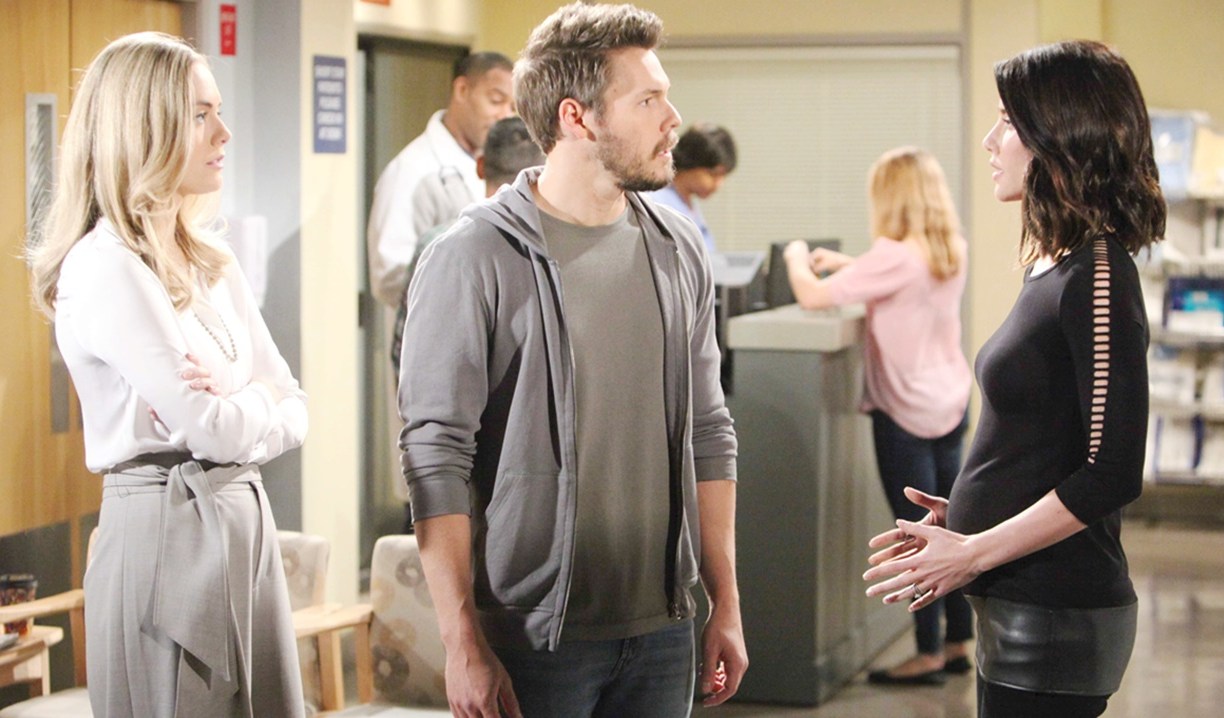 In the last B&B blog, the plot-driven writing drove me crazy. This week it was the repetition in the dialogue that was annoying, along with the return to Liam in a love triangle. I enjoyed seeing Katie and Wyatt, and Thomas and Sally, and loved the scenes between Liam and Bill in the hospital. Thoughts:

Here we go again.
I thought Liam being the shooter was a cool twist. Watching Scott Clifton and Don Diamont play the scenes when Liam confessed to Bill was riveting, and left us wondering about Bill’s motivations in covering for his son, despite his seemingly sincere apology to Liam about being sorry for all the pain they’d caused one another. Hope getting in there and screaming at Bill even gave us a moment where she seemed to have a little edge. Unfortunately, the headwriter had to go full-on back into the dreaded triangle. Hope’s carefully constructed façade of caring about Liam and Steffy’s marriage for the sake of their unborn child came crashing down and she began droning the latest catchphrase, ‘Bill won’t stop until he gets what he wants’ as she built up her theory that Bill would keep trying to take Steffy from Liam, so he might as well concede defeat.

I think I got it, now. So Hope is worried that Steffy will cheat on Liam with Bill. And Hope warns Liam he could get hurt. And she makes these arguments between kisses with Steffy’s husband….who is cheating on Steffy. Right? ? #BoldandBeautiful pic.twitter.com/2nN5k3peWE

By the time Steffy had paid Liam her visit and asked him to come home, I was already envisioning weeks of Hope and Steffy repeating their taglines while Liam waffles. So not into it! Sadly, another couple who were refreshingly different, Thomas and Sally, were written out at the same time.

Sally 2.0 had so much potential when she premiered on #boldandbeautiful, but we know where that went, and now she is exiting in favor of another round of Lope versus Steam ?.

Blah, blah, blah.
There was a lot of talk to drive a bit of action as Brooke spent a good two episodes repeating the same lines to Detective Sanchez before he went back to speak to Bill, then sprung Ridge from jail. The celebration at Forrester was fun, but lacking in substance or new developments, as it was largely just the characters rehashing Bill’s shooting. Moving forward, I guess we’ll see if they will all drop the idea of finding the shooter. More likely they’ll become obsessed with solving the crime as that will make things uncomfortable for the ones who know the truth.

This is my opinion. Please share your thoughts on the blog and the show in the comments section.